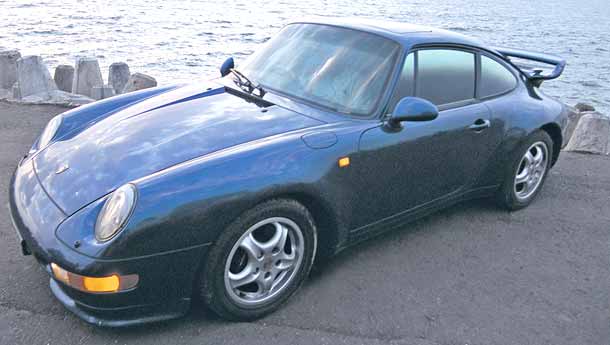 Doctors would say I am experiencing what is known as cold turkey. My throat is dry. A hundred things are racing in my mind. There’s a dull ache in my forearms. And my right thigh is experiencing mild tremors. My breath is in spasmodic bursts. My pulse is at an absurd three-digit figure. I feel highly strung up. But I want more of the same.


Slow down.
Breath easy.
Relax.
I have just returned from a stomach-churning, hair-raising experience. How can I translate this adrenaline rush into mere words? How can these fingers, which were wrestling with a hooligan of a steering wheel, do something as sensitive as type on a keyboard? They are trembling, but I will try, nevertheless.

Nine. One. One. Magic numbers. As mystical, as infernal as 666, the number of the beast. Once you have sold your soul to the devil, I promise you, life will never be the same again. The moment you have tasted and feasted on the offerings a 911 gives you, you won’t settle for anything less.

Throw away that silly automobile you use to commute to work everyday. Take the bus. Skip lunch. Save money. Buy that 911. Your wife will desert you. Your kids would have to be accommodated by altruistic relatives. Never mind. You still have the Porsche.Intoxication. Possession. Addiction. These are words that attach itself to this car. Car? It’s as visceral as automobiles can get. A Porsche 911 is worshipped at the altar of speed. A 911 is as primal, as rudimentary as it gets. It’s beyond metal and rubber put together as part of man’s quest for going faster, faster than ever before.

Yet, it’s not only about speed. It’s about involvement. It’s like a roller coaster ride, only that it’s you in control. But that’s what you think. The Porsche is the one that wants to be satisfied, so it will manipulate you, it’s a temptress. Every time you finish a drive and lock the door, you will walk away from it unsteadily, with wobbly legs. Look back, and it raises an eyebrow and says, ‘You mean, that’s it?’. So you’ll go back to it again. And again. Just to prove a point.

What makes a Porsche 911 such a fierce contender for your affections? For that, you’ll have to experience the sensation of being behind the wheel. Or perhaps, I could help you in a vicarious sort of way.

With its immortal supercar status, and larger-than-life imagery surrounding the Porsche myth, the 911 physically may not be a big automobile. It’s incredible when you consider that, despite its consistent look, today’s 911 is fundamentally an all-new vehicle compared to the one that made its debut in 1964 – over 36 years, it has been through major improvements inside out. A 911 virtually defines the word ‘classic’ – a timeless shape that was futuristic then, contemporary today, fundamentally unchanged tomorrow.

With increasing demands being made out of its reputation and powerplants, the speed-meisters at Zuffenhausen had to either bow down to the laws of physics and stay stagnant, or use advanced thinking and make natural laws an ally. They chose the latter. Aerodynamics be damned, a 911 looks a 911.

If you look at a pre-1995 911 from above, it has a hour-glass figure, bulging at the two ends and slim at the waist. But since then, the mid-section of the 911 has been given more sheet metal and more living space inside, without compromising on drag and performance.

What I had in front of me was a violent, violet stunner. This was a classic 911, circa 1995. Perfect. And this is the Porsche look, according to me. It has those classic headlamps that would, in three years, get a new treatment sourced from the Boxster parts bin. Compared to those fluid, extended headlamps, these round ones evoke the original lines. Call me old fashioned if you will, I love them. The glass area is one elegant, elongated ‘C’ which has remained the same since Ferdinand ‘Butzi’ Porsche pencilled the initial lines.

But you don’t look at the surprised salamander look of a Porsche at the front and pass a comment on its design. It’s the squat, rear three-quarters which is the prominent feature of a 911. Huge wheel arches gorgeously curve over massive nine-inch thick Bridgestones. Can metal be more fluid?

The rear of the 911 looks as if a giant hand has crushed it from above, so the excess sheet metal has been squeezed out on the sides. Which gives it the most well-planted stance of any automobile around. As if that’s not enough, a huge ‘whale-tail’ spoiler grows organically from the back to ensure that it stays on the tarmac all the time. And the battle between the road and the driver of a Porsche is what the magic is all about.

The performance begins the moment you sit on those typical 911 seats – integrated head-rests and stubby edges that keep your back well ensconced and prepared for the event about to unfold. The facia is a mumbo-jumbo of dials which give you quantity and temperature of various fluids around, and to complicate matters even further, the last dial on the right hand side is a time measuring instrument, also known as a clock. Pride of place goes to the large tachometer. Subsequent to that is the speedo, with markings both in kph and mph, and indicators for the gear you are in. All the instruments are analogue, and the only concession to modernity is the digital LCD display that gives information on various things including average fuel consumed, distance to next fuel stop, a trip meter, temperature gauge, and in case of a Turbo, boost pressure. The leather-clad steering wheel has two toggle switches marked ‘+’ and ‘-’. Tiptronic? Damn right. This 1995 911 has a six-speed automatic and a four-speed ‘manual’. What it means is basically shift the gorgeous gear lever into a gate on the right side, and use the plus and minus buttons to change gears – there’s no clutch, of course.

Before you start the engine, pause. Take a deep breath. Understand that starting from that raucous exhust note onwards, driving any other car is a compromise. Six horizontally-opposed (boxer) cylinders come to life like a bunch of school kids just released from the confines of school, and the effect of that enthusiasm is an out-of-the-world burble through twin exhausts. By now your hair is standing up, giving a standing ovation. Placed behind the rear axle is Porsche’s famous air-cooled 3600 CC unit, good for 272 rapturous horses at 6100 revs and 33 kgm of torque at 5K rpm.

Put the chunky gear lever in D, press that pedal and let it roll. Watch that tacho needle do its gravity defying act, and suddenly, things are not in your control any more. Wake up. You can’t look at the passing scenery when you’re behind the wheel of a 911. Nor do you need that music system.

From now on, you are the vehicle and the vehicle is you. If the 911 feels gravel or little pebbles on the tarmac, rest assured that you will feel it too. It’s feedback that you want? No problem, here it is in gobs and gobs. Every thing that the car touches below its rubber is transferred directly to the steering wheel and your seat. A curve coming up? Fine. Goad that monster to attack it. The 911 will do as you command, chewing up and spitting curves with amazing style. The tyres – Bridgestone Expedia, 205/55  Z R 16s at front and 245/45 Z R 16s at the rear – squeal in agony when tightly pushed, but they don’t give a millimetre away in pain.

Earlier 911s were notorious when it came to fast curves, dangerously understeering and moving onwards to the dreaded oversteer if you lifted off. Not anymore. Advanced electronics ensure that the 911 behaves itself when pushed hard. You have something called ABD – automatic braking aid – that brakes the freely spinning wheel. You have the option of turning off the ABD, but that would be for the adventurous. And its something I wouldn’t do, not on Mumbai’s dangerously overcrowded roads. Remember, this 911 is capable of touching 100 kph in 5.6 seconds and boasts a top speed of 270 kph. Disc brakes all round ensure that it stops when you want it to. Not that you want to.

What makes the 911 so exhilarating is the feedback you receive constantly from the road – a hallmark of true sports cars. The Porsche manual says that the steering is power assisted. But I would like to believe it otherwise. That’s because you are not steering the car, but involved in an arm-wrestling championship. Just as well that this 911 featured an auto-tranny. I wouldn’t want to relinquish control of this hooligan on four wheels while changing gears. At least, not yet. With a recalcitrant steering wheel and an even more adamant brake pedal, you will need a man’s muscles to drive it. Building muscles was never so much fun.

Supremely arrogant, awfully expensive, highly impulsive, uncontrollable attitude – this one car fits this description. But at the same time, the boffins at Zuffenhausen have given it a modicum of practicality. You have two small seats at the back, good for two small kids and a tote bag inside the boot, er bonnet.

How can I end this story without making a mention of the quirky individuals who made this marque a force that is feared even in Modena? There were not one, not two, but four Ferdinands who made the black rampant horse from Germany a cult symbol today. The first, Ferdinand Porsche, designed the effervescent Beetle, the second, ‘Ferry’ Porsche, created the Type 356, the car that lay the foundations for the creation of the 911. The third, ‘Butzi’ Porsche, penned the classic lines of the 911. Finally, another member of the Porsche family, Ferdinand Piech (aka the Wolfsburg rottweiler) head honcho of Volkswagen, made the six cylinder boxer a reliable powerplant and tweaked the suspension to make the 911 more safe, but still exciting to drive.

Since the launch of the 911, Porshce has launched several acclaimed cars, but then, the 911, in its various guises – Targa, Carrera, Carrera 4, Turbo – soon would go on to win hearts across the world. But in 1998, Porsche bowed down to nature and ended up water-cooling their engines. A small compromise when you consider the exhilaration on tap.

Three digits. One number. Nine. One. One. Evocative of everything that motoring is all about, isn’t it?

WHAT?
Porsche 911
WHEN?
October 2000
HOW?
It was one of India’s biggest industrialists’ favourite set of wheels. We sent across a request asking if we could drive it, and voila, no problemo! The only condition was that the big shot shouldn’t be named. It was a tough call (heh, heh) but we reluctantly agreed. To Srini, the sensation of driving the 911 was supernatural. As for Deepak, he was not happy with the pictures. So we happily borrowed it again the next day!
WHY?
Replace this car with the latest 997, and it still holds true.
WHAT WE THINK OF IT NOW
‘We certainly think the blue car started life as a Turbo, but then lost its spinners before the tycoon laid his hands on it. That said, the 911 is awe-inspiring. It was supernatural then, it’s supernatural now.’
— Srini