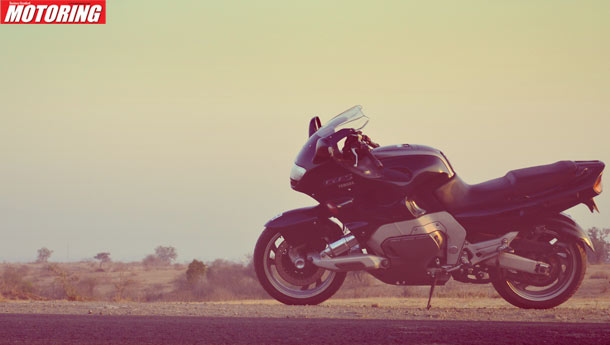 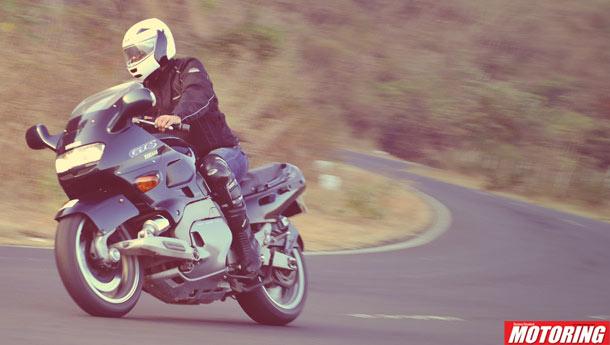 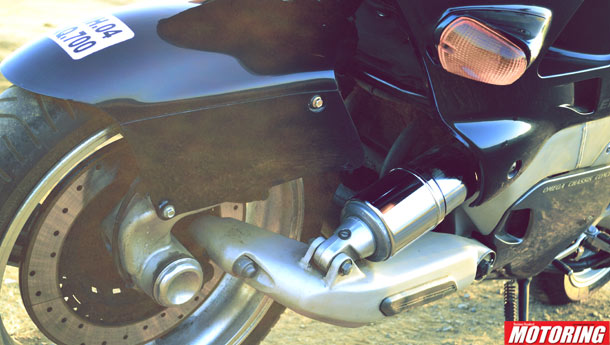 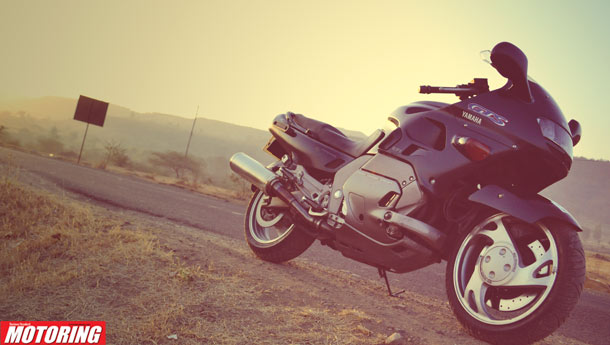 It all begins innocuously enough with a decidedly '80s-looking chrome orb being zapped into some far-flung corner of the desert and the Americans, in their love for all things unidentified and flying, immediately storm at it in their RVs, take it into possession and start analysing it using what looks like Tetris machines turned upside down. Ably paced by music written when mullets and leotards were cool, the underpaid white-coats probe for information from the Tetris box. The most severely underpaid junior boffin springs a badly-cued ‘What is it, Sir?’ on everyone and a woman-in-the-casio voice breaks it down. On curvy displays, it suspiciously looks like a motorcycle but it’s unlike anything they’ve ever seen before. There’s a compact frame integrated around the engine, strangely structured like a crab, a swingarm and a big monoshock at the front, some new fangled thing called Electronic Fuel Injection and stranger still, a catalytic converter and anti-lock braking. Right then, the white coat with the whitest hair finally remembers his line and blesses us with his expert input ‘This technology is far more advanced than anything that we have today’. All hail the Master of the Obvious.

Corny or not, this dealer promo was only apt for its time. It was 1993 and chaps at Iwata, Japan were onto something big, revolutionary even. The motorcycling world, that the Japanese had come to rule after the British front was defeated, saw fierce competition amongst the big four rivals that originated from that tiny island country. Each one of them was equally capable so it was down to having the chutzpah to beat everyone else to the punch...er, the production line. Yamaha placed their bets on this radical GTS1000, and I mean radical, even by today’s standards.

The traditional telescopic fork suspension has been in place since 1934 and though they’ve come ages ahead in performance since then, their fundamental mechanism remains the same. The basic problem that engineers will go on about is that forks introduce unwanted forces into the chassis during braking and cornering because the suspension and braking forces are handled by the same member. James Parker, an American engineer, and his firm RADD had designed a forkless single-sided front steering system that disconnected two very influential forces - braking and steering. His RADD forkless, single-sided was developed a decade earlier with help from none other than Wayne Rainey and Yamaha got so interested, they picked up his firm and told him to design the front-end mechanism for what would be known as the GTS1000.

Let’s make it clear here - the idea has been going around since forever and motorcycling legend Massimo Tamburini’s nutter Tesi 1D pioneered the concept in the modern era almost two years earlier but since Bimota’s numbers were meagre, the GTS1000 had the distinction of being the first production motorcycle of the modern era to come with a forkless front-end. Make no mistake, the GTS1000 belonged more to the post-Y2K era than it did to the year Jurassic Park was released. And that’s because Yamaha didn’t just stop at the radical front-end geometry. They threw in electronic fuel injection, anti-lock braking, a sweet-as-honey 100 bhp Genesis motor and even a catalytic converter. It has an innate ability to polarise opinions but if you ask a few, they see the makings of a future classic in there. And I tend to concur because it has two distinct advantages in its favour - it was way ahead of its time and because it was a damp squib in terms of sales, it is rare. In fact, Bike UK called it ‘the coolest of rare motorcycles’. ‘Scarce, stylish yet completely usable: that’s cool in our books’ they said. And then, imagine tracking one down in India - the only GTS1000 in India in all probability - and, then, holy lord, riding it!

Owned by Parag Chavan, a finance dude based out of Mumbai, this GTS1000 found its way to Indian shores in around 1996 after being imported by the head of the Kalyani Group. Needless to say, if it was pricey for the Brits back then, it would’ve cost a small fortune to import back then, given our government’s archaic tax structure. It’s BMW-league price tag read 10,000 pounds in an era when the Tadao Baba’s epic CBR900 was yours for only 7,000 pounds. Beyond its little legion of hardcore followers, the GTS1000 remained a rarity.

Still, those who got their cheque books out, got an rare, exotic motorcycle that could be ridden every day. Seeing one in the flesh today invokes equal amounts of nostalgia, curiosity and wonder. Cutting-edge as it was back then, today, the bodywork looks overweight and unemotive but also, rather smart in its own strange '90s way. The piece de resistance, of course, is the front-end with its Tron-like front wheels, its centered single disc, the offset monoshock and the single-sided swingarm. In 1993, it must’ve been out there. It’s like being introduced to the iPod after you’ve been first introduced to the word ‘Pentium’ only a few days ago.

I will be honest, I was a bit apprehensive about riding this motorcycle, given its lineage but mainly due to the fact that it’s the only one in our huge country. But Parag, laid-back as ever, didn’t think twice before letting me have a go. Tingling with excitement, I merrily hop aboard and instantly remember that the word ‘lightweight’ wasn’t used even once by Yamaha in their marketing spiel. This generously proportioned sports tourer weighs north of 251 kg dry and as if that’s not enough, once you fire up the motor and putter towards the road, you realise that the steering effort is nothing short of Herculean! I had a very different picture in my head previously and within seconds, that very picture was shattered. The downside of having such a complicated front geometry is that weight goes up significantly, so steering effort is a bit much and then the effect is amplified because the ball joint wears out over time. Get going properly, though, and you begin to realize what a gem of a motor is at your command. Nicked from the FZR1000, this 5-valve, four-cylinder, EXUP-equipped Genesis motor has a soundtrack that could melt the hearts of motorcyclists as it sings along and in character, it’s sweeter than Zooey Deschanel covered in honey. Buttery roll-ons keenly follow every throttle input and if its sublime refined nature doesn’t impress, its torquey bottom-end and punchy mid-range definitely will. Regardless of what the tacho reads, the Genesis pulls in an effortless, fluid manner that’s frankly addictive. 5000 rpm and up, the motor really starts singing and delivers linear forward thrust that pushes you along at brisk pace. You won’t complain about the lack of speed here. Despite the portly proportions and a relatively mild 100 bhp state of tune, the sprightly GTS used to hammer down an 11.6 second quarter mile time and a 227 kph top whack right out the crate.

At speed, it displays unshakable straight-line stability and thanks to the clever front-end, there’s virtually a complete lack of brake dive. Go on, grab a handful of brake, but the front will refuse to budge. Running a large single disc up-front placed squarely in the centre of the rim - a position dictated by the front-end design - the anchors felt reassuring and frankly, I was a bit surprised as to how good the bike felt overall, despite being close to two decades old. It wasn’t all rosy though. The other, uglier side of the coin shows up when the corners arrive. It demands so much more effort to get the big GTS around a corner. The RADD front-end is a bit introverted and the girth doesn’t help. I cannot remember the last time I had to put in so much effort to stay on course but then again, age also comes into play here. It doesn’t take much time for you to figure out that the 1000 felt much more at home on the straights than it did in the twisties. Can’t make the GTS do punishment sit-ups either, can you? It was only staying true to its easygoing touring role.

Naysayers used the GTS1000 as a shining example of using technology for technology’s sake and truth be told, they had a whole bunch of other reasons to not like this motorcycle. The tank was in fact a kettle, urban manoeuvrability wasn’t the greatest nor was the big GTS too kind on front tyres. Being particularly expensive also didn’t seem to go down too well. The naysayers were armed to the teeth in this case and soon, by 1996, the shining beacon of technology had gone. Two years later, the epic new R1 was introduced and all was forgiven.

Despite the niggles, there was a future classic in the making somewhere in there. Yamaha’s 1993 GTS1000 was a fearless and bold leap which, directly or indirectly, pushed motorcycle technology into the future. It might have failed spectacularly but it epitomised courageous design, fresh engineering and a dedication to innovation. An achievement that earns it a place on the top shelf of motorcycling history, naysayers be damned.