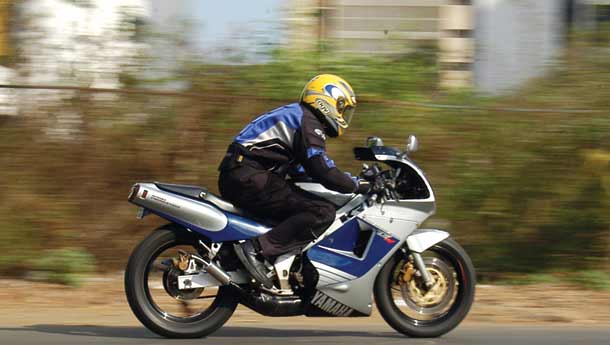 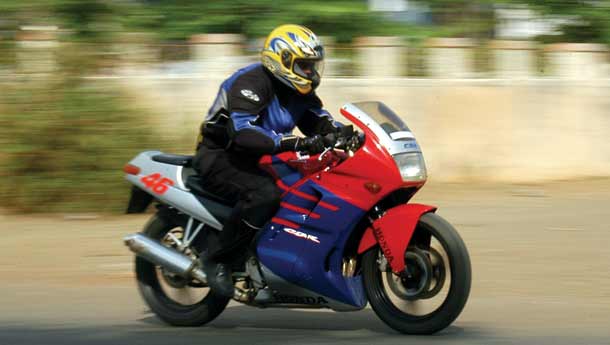 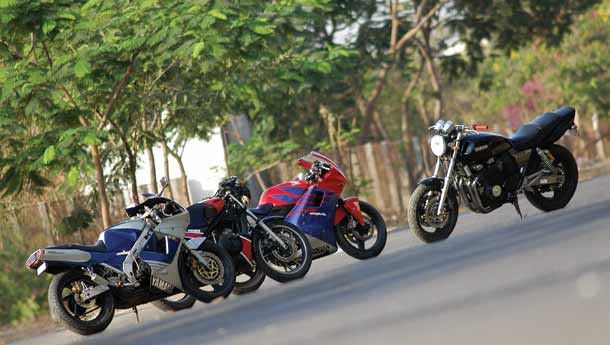 You might think Rs 2.5 lakh is not your cup of cheap tea. I know I do. But this story arose from the good sales of the Hyosung Comet. If 500 people turned out with Rs 2 lakh to purchase the sporty, smart, V-twin, would they be willing to shell out between 25 percent more for even more serious horsepower? A few phone calls later, we had a list of seven machines, of which we knew a few would not make the test and photography session.The final four, in the pics, are the 1989 Honda ‘Busybody’ CBR250F, the 1998 Yamaha ‘All-rounder’ XJR400, 1987 Yamaha ‘Oh-bloody-hell!’ RD350LC and the 1986 Yamaha ‘I think I wet myself’ TZR 250.

You can already see that these machines don’t look showroom glossy, and that’s important. Each of the four owners actually uses them on a daily basis, apart from Sunday scratches – a sign that all, despite their age, are quite reliable.

In fact, when we quizzed mechanics in the know, each machine got identical reliability feedback. They all said, ‘After purchase, the battery and the tyres – if required – should be replaced; that apart, it’s a precautionary oil change and service, and you’re on the road.’ The tyre sizes, for all except the XJR, are easy to get in India and spares for all the four machines can be had off the internet with ease.

Yamaha TZR 250
The TZR, for a machine pushing twenty, is in pretty good nick. All the bits are there, and while our favourite colours remain the Yamaha white with red square blocks running from the lower fairing cowl to the tail, this one looks pretty smashing as is. The cans on this one are new and the TZ still turns heads. Those that aren’t turned follow when the snorting 2-stroke racebike soundtrack begins to play.

The TZR’s engine will morph your surroundings into something approaching the Circuit de Catalunya at every twist. The raw two-stroke (still) feels race ready and has a famously narrow powerband that takes a bit of getting used to. It’s happiest millimetres from redline, a place which can be scary and superfast all at the same time. This near-200 kph monster demands respect.

The TZR was the customer version of the TZs that Yamaha used to blow away the competition with at the racetrack. And we didn’t research this, the bike told our backs as much. The ride quality is firm and the dropped down clip-ons will hurt, sooner rather than later. However, get used to the tucked-in ergos and you have a phenomenal handler to play with. If you wanted to sort out your riding skills, this is probably the machine to do it on.

Yamaha RD350LC
Before you point out the missing fairing, let us point out that the owner does, in fact, have it and other items safely stowed at home. With fairing (and without), the LC is quite a handsome motorcycle, especially in lighter colours. This particular example was repainted, rebuilt and refurbished about a year ago, and is the shiniest, save for the XJR.

This machine has just about 2,500 km since the last (comprehensive) engine rebuild. That means its run in is complete and there’s almost a lakh kilometers left in it. It rings and dings till about 6,000 rpm when the YPVS kicks your butt into orbit. YPVS also helps save loads of front tyre wear by lofting it high, and often.
The gearbox is quite slick.

When we were out riding, the LC wobbled a bit under braking – the head bearings probably need a check. That apart, the LC is a legendary handler, capable of combining its stonking engine power with light, agile handling to run rings around much bigger, newer machinery. The brakes need a bleed as well, but the rear shock felt well-settled, if a little low on preload.   Honda CBR250F
The CB250F isn’t going to get anyone worked up. However, the square headlamp was very much in vogue in its heyday. The machine, we’ll admit, might look a little frumpy, but it can lift its skirts and really sprint. Also, the older slabsided bodywork probably looked better with psychedelic stickerwork, not the simple wing design this one’s wearing.

This is probably the most useable of all of these bikes. It makes enough power everywhere, from zero to 18,000 rpm! The ludicrously high redline is a function of its jewel-like 250cc inline four engine, and shifting up at about 16,5000 rpm is best suited to forward progress. The engine likes to be pampered and examples which have been run-in with care, warmed up daily before riding and kept well usually stay crisp and healthy for decades.

The little needle is highly regarded as a track-refugee handler and even in its two-decade-old shape, the CBR felt quite sharp. Being a very light machine, the actual effort levels are very low and the bike feels very eager to do your bidding. If you’ve been wanting to get your knee down, this bike, on new tyres, is probably a solid bet.

Yamaha XJR400
Low whistles, cat calls and pick up lines are definitely the need of the XJR. The most muscular looking of this quartet, it is also the newest, and hence in the best state. The simple black paint only highlights the curves and proportions and that aircooled lump is just so hunky!

The XJR might have a 11,000 rpm redline, but it isn’t that much of a power monster. It makes a healthy amount of torque from about 6,000 rpm on. Serious progress needs even more revs. The solid sounding engine is quite relaxed in character, which fits in perfectly with the bike and the XJR should make a fast commuter and relaxed tourer, all rolled into one.

The poor XJR has been ridden hard and the rear shocks are shot. Experiments show that the new Pulsar shocks might actually fit it. The XJR rides quite well and favours stability over agility in corners. It’s a safe, no-frills package, which actually makes it attractive to a really wide range of riders.

Pocket rocket
At Rs 80,000 to Rs 1,00,000 there isn’t a cheaper deal than the Yamaha TZR 250. The money buys you a classy handler and 50 freaked-out horses rolled into a package wearing a legendary badge. However, the TZ’s not for everybody. It’s a bit single-minded and always wants (still) more throttle, which can be tough to live with on a daily basis.

The initial outlay for the XJR is a bit steep. Between Rs 3 to 3.25 lakh, this is a bit even out of the story’s budget. However, beyond that lies a calm world of carefree motorcycling. The other concern on the XJR is that it’s a bit of a drinker and will go through a tankful (18 litres) in about XX km.

For Rs 1,00,000 to 1,25,000, you get a rip-snorting expletive of a bike in the RD350LC. Hair-raising performance accompanied by a glorious soundtrack ensure you cannot have complaints. The LC can burble along at low revs if you need to, and thus is far easier to live with than the TZ. Again, it is a two-stroke, so eventually the engine will become a cost. And given the way it makes power, you’ll need new tyres every 15,000-odd km.

At roughly the price of a Comet, the CB250F is our pick of the lot. It’s a Honda, which means post-nuclear holocaust, Cher, cockroaches and this little baby will be the only survivors. At Rs 2.25 to 2.75 lakh, you get a super handler and a tiny rev-hungry engine that makes 45 bhp. And if you get a good piece, maintenance is restricted to the odd oil-change and service.   Strike two: Both strokers offer raw, undiluted performance... a feeling we’ve forgotten some-what. The TZ needs more careful rev watching, while the RD is happy to trundle along before blowing you skyhigh past 6,000 rpm. Yeehaa!

All four one: The XJR and the CBR are friendly – and easy to pilot in traffic – and quite fast once the revs are up. The tiny CBR is redlined at 18,000 rpm. The XJR is the opposite – sedate and relaxed, it would make a good tourer and commuter

Honda VFR400R
The VFR400 is a tiny machine, with proper track ergos, a single sided swingarm and a solid V4 engine. However, inspect the rear wheel bearings, they can be expensive. Expect to pay between Rs 3 and 3.5 lakh for machines from 1989 to 1990.

Honda CBR400RR
The Honda CBR400RR is a really appealing sportsbike. With 200 kph ability, all the right kit and multi-coloured stickerwork, there isn’t a much faster machine to be had between Rs 3 and 3.5 lakh.

Honda CBR250RR
Only a few CBR250RRs made it to India, and hence the prices are a bit high. There’s a smidgen more performance on offer than the 250F, but tags can touch the Rs 3 lakh mark

When looking to purchase one of these, start with checking the consumables. That’s the condition of tyres, disc pads, fork oil seals and chain. All of these parts can range from expensive to hard to get, so be careful. Next, if its a four-stroke, watch for smoke from the exhaust, or oil deposits around the exhaust. If there is any smoke/oil, don’t bother, look for another machine. Then check the levers and footrests for damage. This will point out earlier falls and accidents. If there is damage, you will want to see if the chassis is straight, visually and during the test ride. Also, check the fork stanchions for damage. Any cuts, slashes or scratches on the fork legs will lead to frequent oil seal replacements.