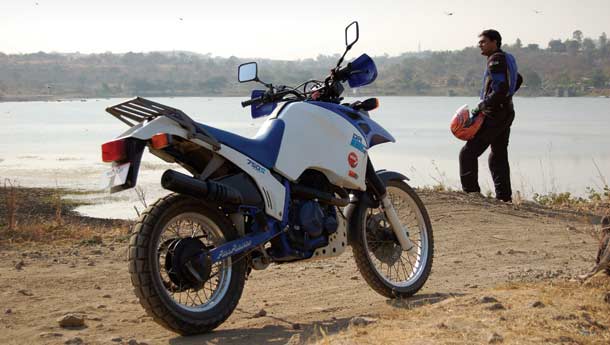 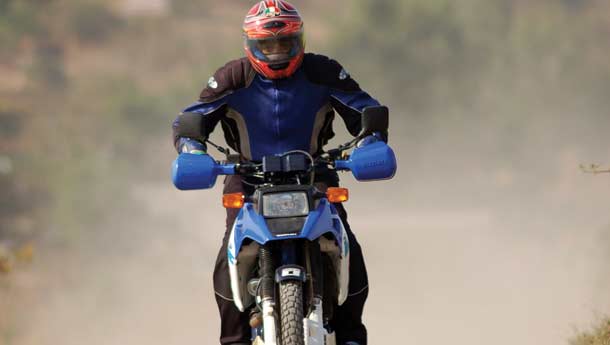 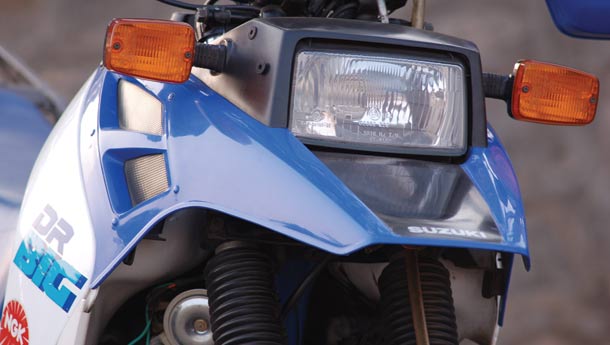 If you haven’t already noticed, BSM is in love with the BMW GS-series of machines. Bijoy’s personal fave, I think, is the previous generation R1150 GS Adventure, while I personally find the new one, the R1200GS Adventure, particularly impressive. Despite which, when Pune’s famous Raju Sheikh told us he had a DR, we never made any sort of connection. I was excited, of course, but only because the DR is probably the best of the middle-path off-roaders that Suzuki makes. While most magazines hardly ever report riding impressions (they’re that old), when they do, the superlatives fall over one another like fans asking for Rossi’s autograph.

So we were all expecting the typical DR. Which would be a 400cc streak in yellow, in one of the numerous versions – street-legal, enduro style, ‘crossers, etc. But when we walked out of the restaurant where we lunched, there was a Suzuki white-blue DR750S Big standing there.

First impressions? ‘It’s a bit large, innit?’ Raju just smiled and pointed at the helpful ‘Big’ sticker that adorned the gigantic 30-litre tank that makes up almost all of the DR’s bodywork. It’s hard to believe, in hindsight, that in the proper rally versions, the skimpy rear coverage was also inflated to make space for more fuel.

Rally versions? Ah, yes. The DR750S Big started out as a racing bike and then became a popular big single off-roader. To put it in its time context, the DR came out in Europe at the very end of the ‘80s. The Yamaha Tenere, Cagiva Elefant et al, were racking in the sales, the Paris-Dakar was as popular in Europe as deodorant and everyone was making massive trailies that defied logic, comprehension, and most of the time, the riders who chose to straddle them as well.

While the DR’s rally record was far from ideal, sales were good. And it isn’t hard to see why. The bike I am about to ride, for instance, has survived the past two decades and more with almost no sign of wear and tear, with the help of a caring owner no doubt. And while a lot of bikes that old seem a bit faded and furry around the edges, the DR is as sharp as the tang of tequila in the back of the throat, and as I was about to find out, about as intoxicating as well.   But before we go off roosting into the wilderness (a scary thought, since all my riding skills in the dirt are worth nought), let us just examine the bike a bit. You will already have noticed the GS-style twin mudguards – a flat, short one on top just below the headlamp, and another one just above the front tyre. This particular motorcycle came wearing dual duty tyres front and rear, but full-knobblied DRs are, or rather were, supposed to be quite formidable in the right hands in Rally Raids of yore.

The massive tank hides what used to be the world’s largest single cylinder motor. The DR750S Big boasted a 727cc air/oil-cooled four-stroke single featuring an SOHC four-valve head layout. The big thumper produced 52 bhp (at 6600rpm) and an impressive 5.8 kgm of torque at a middling 5500 rpm. Also known as the Desert Express, the 179 kg juggernaut could pummel through the scenery at a frankly scary 150 kph, using its sheer weight and girth to pound ruts, bumps and holes into submission.

Which was all fine, only I couldn’t start it. Thumbing the starter would crank the motor over, but it wouldn’t catch. Then Raju showed me what looked like a second, slightly smaller clutch lever, above the full-size one. Decomp? That’s right. Starting the DR involves holding down the decomp with all your might, engine kill switch and ignition in the On position and then cranking it. And the moment you hear the first screech from the ignition you let the decomp go like you’d dump the clutch for a wheelie.

The big single thuds into life quite readily once you know the trick and it sounds intimidating. There’s a big-inch bass note that is really nice to hear. At idle, the thuds are closely spaced and send little shivers into your palms through the grips. It’s alive, I tell you.The gearbox is Suzuki-slick – snick first, clutch out and you’re off. In a hurry. The big motor obviously makes substantial torque from the off and it will catch you out if you’re not careful. My task was to ride to the shoot location, which was across a dirt dam of sorts that rings a small lake on the outskirts of Pune. Yes, they handed me a big single, on my least favourite surface. And to help me out, instead of choosing a large, flat field with lots of run-off space, they hand me a two-metre wide rut, on top of a sixteen-foot tall bund. Framed perfectly by a deep, blue lake on one side and dense vegetation on the other (no doubt hiding all manner of sharp rocks, blood-thirsty wild animals and that sort of thing).   My confidence, ebbing quickly, was restored by the Big, though. I remembered enough to stand up and stay on the throttle to get out of trouble.I did just that, and the ‘road’ became a laugh. At a steady seventy kph in third, the DR rumbled away with no stress. Even I was impressed with the dust trail I had just created. And for that moment, I’d forgotten my deeply rooted fear: I was going to lob this thing, myself in tow, into the lake.

Not wanting to let go of the confidence that I kept the throttle open, feeling the bike buck. Ever so often, the rear tyre would spin on a looser stretch, before the torque, weight and momentum dragged it back into line. The long travel suspension soaked up the worst of the rocky-dusty surface. Hell, it made me look like a hero. Until it was time to stop, that is. The 890 mm seat height hit home like a well-aimed Lennox Lewis roundhouse. As I gingerly fingered the front brake, down shifted to a crawl, I wondered if my feet would reach the ground. Maybe I wasn’t going to toss it into the lake – the day’s disgrace would come by pinning myself firmly and painfully under the bike. Thankfully, it worked itself out. And I didn’t drop dead, from embarrassment or otherwise.

Later, I had the opportunity to ride the bike on properly tarmac-ed roads. Which was an eye-opener of sorts. The sheer weight of the bike, so obvious on the dirt (in good and no-so-good ways), seems to disappear somewhat and makes the DR quite enjoyable in a sort of lazy-tourer sort of way. At about 130 kph, the bike seems to float elegantly atop the tarmac, effortlessly thumping away the miles.

Later, I found that the Internet was full of stories of how the DR was best ridden leisurely and deliberately, on the road and off it. It wasn’t the sort of bike you set lap times with, off-road or at Spa and it certainly didn’t like being pushed around too much. Unless you were Gaston Rahier, of course, in which case you could drag it kicking and screaming to Lac Rose.

Like Suzuki’s Dakar record, the Big would fade into motorcycle history, though. It would get replaced by a marginally more powerful 779cc dual carb DR800. However, Suzuki would simultaenously work on other DR models reaching from 125cc to the full-options 800. The 650 and the 400 would become the most popular of the lot. Riders would find that the middle displacement models were a neat compromise between the small one and the Big. The DRs would evolve further into multi-role dirt bikes that would eventually ensnare the editor of this very magazine. Quite a tale, eh? BSM