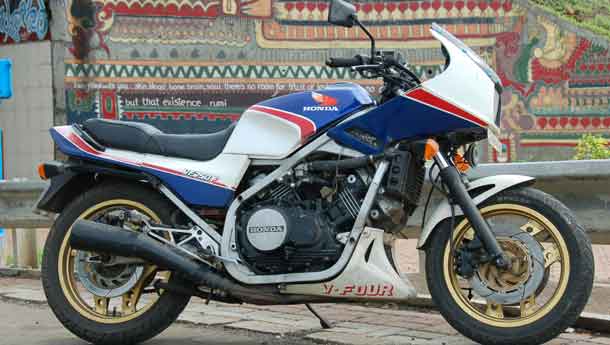 So if I were to sell my helmet and wait for the next salary, I can manage half of it.’ Words of peerless wisdom from Mr Crasto, stating his contribution to the VF fund. The dream to own a superbike before turning 25 seemed well within sights now. So what if each one of us would own half of it? Our bragging rights would still be turned all the way up to eleven. But then, that was not the point. The mere thought of waking up to a 750 was enough for both of us to put everything we had on the line. Even if the VF wasn’t our kind of motorcycle, this one was in spectacular shape. Or at least good enough to make us go all weak-kneed.

Unlike those annoyingly perfect concours machines, this one wore its age rather well. The paint was faded just like it would on a twenty-four year old motorcycle. Every single tell-tale lamp on the bike worked, and it came with enough spares for us to lose track of them. It had just been through an engine job, was running a K&N and came with the correct jets too. Then there was that big motor that completely sounded the part even at idle. But at the core of its appeal was the look of the thing. I have always had a thing for the classic blue, red and white colour scheme and Josh couldn’t stop raving about those golden Comcast wheels. Edgy and purposeful like a Cold War jet,
the VF had just found itself two of its newest fans. Now do you know what it’s like to go swimming underwater, where you can see the end of the pool and you aren’t sure if you can make it. Imagine if someone moved the wall further away. Well, that’s how we felt when Alan, the current VF owner said he would like the money now. Right then, raid grandma’s savings, empty all pockets, still a few grand short. Bye, bye provident fund.
But taking it out for a morning blast all made it seem worth it. The 748cc V4 was putting out 86 bhp at a manageable 10,000 rpm and was making the most boomingly glorious of exhaust noises, just like a proper V-four.

The VF came out way back in 1983 and as with every flagship motorcycle now, this one too was inspired by Grand Prix machines. Better still, it wasn’t just inspired it was actually homologated for the AMA championships for 1983. The VF actually started life as a 1000 but AMA rules brought the capacity down to 750. The Interceptor was untouchable that year too and it was only after the end of next year that competition started to get the better of it. Its real claim to fame though was not the motor capacity, but the way it was cooled. This was one of the first motorcycles in the world to use liquid cooling. There was intelligence in the frame too. The VF was also one of the first motorcycles to use a mild-steel perimeter frame with box sections – something of a forerunner to the now standard deltaboxes. And I am sure you’ve heard of air suspension. Well, they existed on motorcycles too. The VF got air-assisted units on both the front and the rear and to increase damping, all you had to do was ride up to the nearest pump, fill it up with air and go from having an extremely comfortable motorcycle to an extremely agile one.
But even with all that technology, it really is beyond me how anybody get their knee down on something like this. I mean it weighs a better part of 200 kg, is long enough to shame modern day cruisers, and just getting it off the stand is equivalent to a full upper body workout. The weight disappears once on the move but even then the VF is as comfortable in corners as a middle-aged man is controlling a computer mouse.
Yet none of this stopped the then motorcycle press from going berserk about the VF’s handling capabilities. Funny how time changes things. Me and Josh were just happy revelling in that extremely potent midrange. Only when we actually got there, that is.Because even though past laurels and ‘world’s first’ make you feel good even after you are bankrupt, pushing a bike for 50 km doesn't. Especially not when you think it’s the CDI that’s causing all the trouble but it’s actually the rectifier. So you change the rectifier only to realise it was the CDI. Yeah, you think it’s
funny. It’s not.    But then this is the exactly the sort of thing that you find out when you actually own a 1980s superbike. It is also the exact sort of thing you don't care about on those rare occasions when for those fifteen minutes of fame, everything works just the way it did, when the you first rolled the bike out of the showroom. And in no way is this meant to discourage you from acting stupid and getting yourself an 80s beast.
In the annals of history, of course, the VF went from strength to strength to become an all time great. From being a race-bred machine to a full-blown hyper tourer, in the VFR the V4 continues till this day. The other spin-off on this motor came in the form of the Magna, a cruiser that was built for the US that sold well in the mid eighties. For us though, the VF was like realising a dream that only just fell short. But what the heck, either of us can now claim to have owned it a proper 80s superbike. We probably pushed it more than we rode it, Nevertheless it hasn't left us bitter. Which could also be because we sold the bike for the same money we bought it for. And now the pride of place is occupied by a BMW F650! Finally a motorcycle we can actually ride.