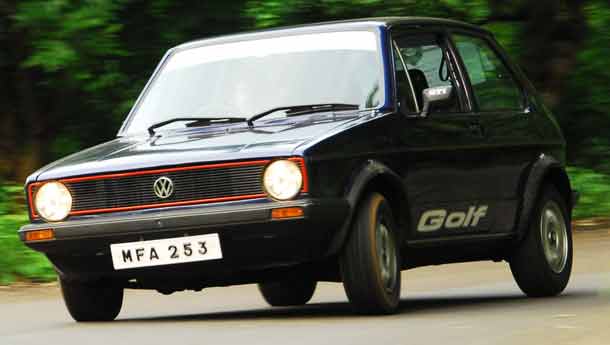 Putting a powerful engine inside a small, light car is no big deal. American kids did that with their hot rods way back, till Detroit picked up the idea in the 1960s. And a host of small US-European ventures had European carmakers shopping in the US for massive V8s to shoehorn into tiny engine bays. So pray tell me, if the idea ain’t new, why the hell does the Volkswagen Golf GTI have such an awe-inspiring, legendary reputation? To drive it is to find out.

I am on the highway leading out of the city in a blue GTI from 1982. To be honest the car is not in 1980s showroom condition. Small cables are exposed inside and the gear linkages seem to be worse for the wear. The engine needs some TLC, as the drone seeps through the firewall into the cabin. The seats need some bolstering, the plastic parts need to be cleaned up, serviced and refitted, while the fabric upholstery could do with a general stitch-up job. The new owner of the car – who prefers to be unnamed – is in the process of bringing the peerless GTI back in form – but I hijacked him mid-way just so that we could celebrate Volkswagen’s arrival in the country by featuring the one model in their lineup that has enthusiasts drooling.

He is in the passenger seat and is explaining how he is going to put the car back in shape, but I wonder if he noticed that I have the pedal nailed and the speedo is showing in excess of 110 kph. Heck, for the condition that the GTI is in, and having spent 25 years on Mother Earth already, the first-generation Golf is relentlessly pressing ahead. In its era, if I were driving it on an autobahn, I would have to flash my lights and get other cars to make way.Because none of them would have suspected that a puny hatchback would actually pose a threat to bigger sedans. And that exactly was the GTI’s favourite party trick. It had extremely discreet touches that distinguished it from its slower siblings, and would have passed off as a regular Golf if you didn’t notice the red pinstriping on the grille, the larger-than-standard front spoiler, the barely flared wheel arches... and it’s only if it loomed close enough in your rear view mirror to see the GTI badge on the grille, that you realised you had to move over.

Ah, but that would have been the 1980s in Europe, and I am in the late-2000s in India. Drivers of other cars around me don’t give way – well, if GTI meant something to them, they would have, but that’s obviously not the case – so it’s time for the classic Indian trick of honking their brains out. The GTI’s steering wheel has not one, not two, but four large, hard-to-miss buttons that activate the horn. Honk, honk! The Sumo in front of me moves ever so slightly. A quick downshift to third sends the revs up in the atmosphere, the engine note becomes a loud snarl and I am through.   The 1588cc inline-four, which VW borrowed from Audi, is the main reason the humble Golf transforms into its aggressive GTI version. Instead of aggressive, I would have said firebreathing, but today, over 100 bhp in small hatches is not a big deal. But back then, it was the sole preserve of larger sedans. This immensely rev-happy SOHC motor develops 110 bhp at a raucous 6100 rpm and 14 kgm at a high 5000 rpm and it featured a few changes from the donor motor, including a higher compression ratio and larger inlet valves. But the biggest change was of course what I think added that ‘I’ to the GTI – fuel injection. During the development of the GTI, VW chucked the carburettor away and fitted the famous Bosch K-Jetronic fuel injection system. This made the throttle response virtually instantaneous and made a world of a difference in the way the car took off.

Even after all these years, the engine remains the first generation GTI’s strong point. It pulls superbly, though you need to be generous with the revs. It could do about 180 kph when really pushed and could attain 100 kph within nine seconds. For a whole bunch of people who had only ploddy Beetles in mind when you said ‘Volkswagen’ to them, the GTI was a jaw-dropping revelation. VW kept away from adding superfluous touches to the car, like spoilers and skirts, to convey the impression that it was really quick and fast (and it also helped keep the weight, as well as the costs of the car low), and this is what actually lent to the GTI cult – this stylish sheep was actually a rabid wolf.The five-speed gearbox – with that neat golf ball gear knob – is a bit weak in this GTI. I have driven Golfs from the 1980s and the gearshift quality was never an issue. Still, I can’t wait till the owner opens up the gearbox and puts the right things into place.

For a sporty variant of Europe’s favourite hatchback, the driving position is designed to be more comfortable rather than sport oriented – to cover maximum kilometres on the autobahn in the shortest possible time, no doubt. Besides this, you would emerge pretty fresh from the journey. Two important reasons: one, it had the legendary VW build quality and two, its suspension setup – independent, with McPherson struts up front and trailing arms with torsion beam at the rear – was really over-engineered. And it feels so even today. For a 1980s car to drive so well on late-2000s Mumbai roads, it is something else. Really, the skunk works team that put together the GTI concept (See sidebar: Hole in one), ensured that the increased power also meant a car that handled well. Putting the GTI through some really tight corners, it’s really amazing how well it sticks to the line. Every time I took a corner, I knew I could better it the next time, and push it some more. And I could do it over and over again, and never did I hear a complaining squeak from anywhere in the GTI. Sometimes you wonder why you need electronics to get the car to behave the way you want it to!

Seriously, being simple and completely focused is what began the GTI cult. But over time, Golfs became fatter, heavier, and I have to admit this, safer. So the raw excitement that the first and second generation GTIs possessed may be missing. Still, someday in the future, when we have VWs wearing that badge in India, remember to politely make way.