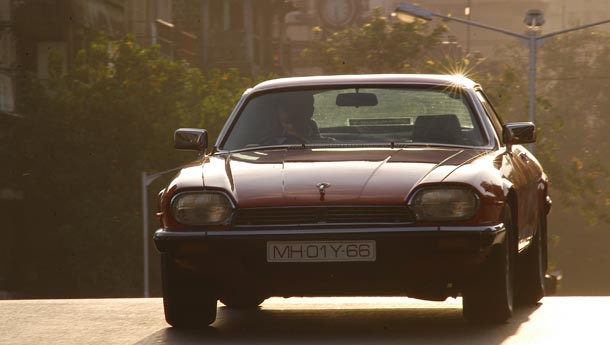 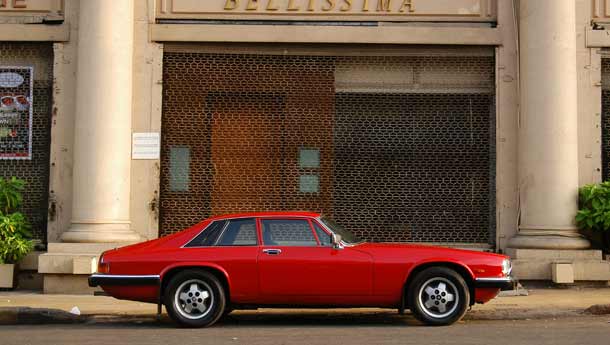 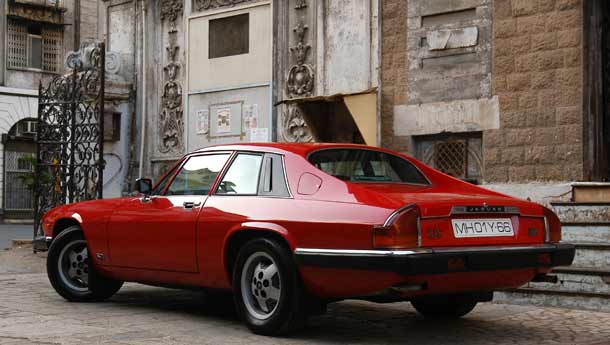 One day, many years back, I saw a midnight black Jaguar XJ-S parked in front of a hotel in Dubai. It looked extremely smug sitting there, and the sparkling lights of the hotel and the city were reflected on its long and svelte bodywork. It was the first time I saw it in the flesh, and it had the effect of stopping me in my track. Even in the exoticar-filled emirate, I was smitten seeing one. I walked around the car, took in all the details and dropped saliva on its quirky, almost Italian lines. An ironic reaction, considering the XJ-S was in fact criticised harshly for looking the way it did. But unlike cruel automotive journalists who pass judgement on contemporary cars, those who write about classics have the benefit of hindsight :)

Fast forward to the present. Mumbai, during rush hour, is a bitch. But I had a Cat with me. Yes, eight long years since that first encounter with the XJ-S in another land, here I was, driving an example from 1981. But right in the middle of peak traffic. It can be quite a pain even in a modern day car, so I had my apprehensions sitting behind the wheel of a proper 12-cylinder engined, near quarter-century old automobile. Well, it was a three-speed automatic, so shifting an aged, clunky gearbox was not one of my problems. Um, actually, I had no problems at all. The Jaguar’s V12 was so smooth and sublime that it was purring around like a domesticated pussycat in its owner’s lap. Amazing. There was none of the barely reined-in anger of a high performance motor, no discomfort while staying in the low rev zone, none of the hardly restrained flood of horses. It was so well-behaved that I suspected that the owner of the car had engaged valet mode, shutting off one bank of cylinders! It had no such feature of course, it’s just that this jewel of British engineering had all the attributes of British civil behaviour too – stiff upper lip, courage under pressure and the like.

Pootling around, waiting for traffic to clear a bit, I glance at my surroundings. Having seen and driven earlier Jaguars, I was surprised to see how un-Jag the interior was. Instead of the neat, classic layout comprising round Smiths gauges, this one had upright, rectangular displays, except for the large speedo and the rev counter, while switches were scattered around all over. If not for the black leather and wood veneer, you could mistake the interior for that of an American barge. Actually, the wood and leather treatment was absent in the XJ-S in its initial days, and made it appearance only in 1981 – the XJ-S was launched at the Frankfurt Motor Show back in 1975. And with its spindly T-shaped gear lever, you could mistake it for any other American car. Sacrilegious! It would take Jaguar 16 years to give the interiors a thorough makeover (along with a comprehensive exterior facelift too – this, from a company that tweaked the perfect looks of the XK and E-Type every four-five years!).

I found the passenger compartment cosy – it’s quite a low-slung car, you see – but taller drivers would find it almost claustrophobic. The rear two seats are an excuse, even a breadbox would find it uncomfortable back there. Besides, those flying buttresses – a design feature that would be an integral part of an Italian supercar, but downright bizarre in a dyed-in-the-wool British grand tourer – do hamper rear visibility, but it’s something you can eventually get used to living with.   In front of me, the long hood stretches in true Jaguar fashion, but the nose drops quite sharply – so sharply in fact that the retrofitted hood ornament can’t even be seen through the neatly proportioned two-spoke steering wheel. But what I do see is a clean stretch of road. Time then to push that tiny accelerator pedal to the floor carpeting and see why this car was purportedly the greatest GT car of its time. No drama,
no explosion, no neck-snapping g-forces. It’s smooth, linear, progressive... whoops! Damn it, it’s mighty powerful and bloody fast too! Speeding is so, so effortless in this Jaguar, and yet when I’m doing over 120 kph, I know that I’m using just a fraction of its full performance potential. Dab the pedal a little more and there is an additional surge of creamy torque – yet, there is no angry note from the engine and inside the cabin, it’s absolutely serene. You could have a serious discussion on the implications of the Hezbollah winning the elections in South Lebanon on Azerbaijan’s foreign policy while wafting at over 170 kph in this car.

Refinement is the 5343cc V12’s biggest virtue. But 285 bhp at 5500 rpm and a majestic 40.2 kgm of torque at 3500 revs is not bad either. With two valves per cylinder (no multi-valves to complicate things here, and perhaps make more noise), this awesome powerplant was found in the last version of the seductive E-Type too. But here, it offers more power thanks to a revised Bosch electronic fuel injection system, plus this particular model is one of the first HE XJ-S to come out of Jaguar’s Coventry works. HE essentially stands for high efficiency, as this version, which debuted in 1981, features higher compression heads – thus offering better fuel economy and more juice. Thrusting all the power to the rear wheels is a General Motors’ three-speed automatic transmission that was initially criticised for sapping power from the engine vis-à-vis the manual version. But at the end, it was the automatic version that simply blew the manual in terms of sales – only 352 customers out of a total of 112,000 opted for it. Not surprising, because there’s prodigious amounts of power available on tap, as also the convenience of driving an auto in this format of an automobile overwhelms everything else.

Well, the engine does allow you to cover miles and miles of tarmac effortlessly, but critically, what makes you emerge after a journey without a hair out of place is the most supple and fantastic ride quality of the car.   The XJ-S is based on the XJ luxury saloon, so Jaguar allowed the coupe to borrow the suspension components (and disc brakes) as well. So the XJ-S features double wishbones and coil springs at the front and lower wishbones with twin coil springs at the rear, with anti-roll bars at both ends (which the saloon did not have). The net result of this is a car that’s simply cossets you no matter what the road conditions are. It’s almost like a magic carpet over smooth roads, and on some rough sections, manages to smother whatever lies beneath the wheels. Proper on-road British etiquette, shall we say?

The XJ-S had everything going for it, yet because of its long reign and a reluctance of the cash-strapped British Leyland management to revamp it periodically, competition from Germany, particularly Stuttgart, would hasten its end. Compared to the Mercedes-Benz 450 SLC, the XJ-S was old world and too traditional. Amongst GTs, the 450 SLC was safer, contemporary and had better technology going for it. Yet, the XJ-S remains the only Jaguar that’s been the longest time around – it went out of production in September 1996, after 21 long years. The very same factors – read quirky looks – that earned it brickbats in its initial days, turned out to be a highly individualistic feature of the car. No wonder it turns heads even today, including those of hard-nosed automotive journalists.

The XJ-S debuted in 1975, the year the visceral E-Type passed away. So people thought the XJ-S was a replacement for the E. But it was a grand tourer in its own right, too heavy and luxuriously appointed for a sports car.

While the development work of the XJ-S was going on, there was anxiety that all open-topped cars were going to be banned by over-zealous US legislation (which never happened, of course). So the XJ-S was engineered only to be a hard-top coupe. It would take 13 years before a proper XJ-S convertible would be launched.

In 1988, the same year when the convertible was launched (and went on to become quite successful too), Jaguar introduced a hot TWR-engineered 333 bhp XJR-S version.

The lines of the XJ-S were considered a compromise, and it was taunted as having been designed by a committee. Which was the bitter truth, by the way. Still, time has forgiven everything, and it also proves that committees also work.l Jaguar’s GT received a much deserved and comprehensive makeover only in 1991. But this came at a cost of US $84 million.The XJ-S was based on a suitably shortened XJ12 saloon platform. It has endured so well that the XK8, which debuted in 1996, is based on the XJ-S floorplan.