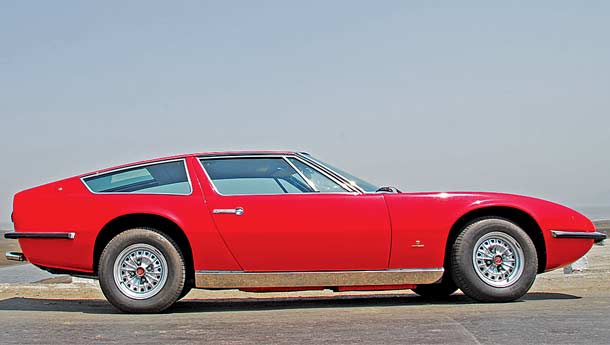 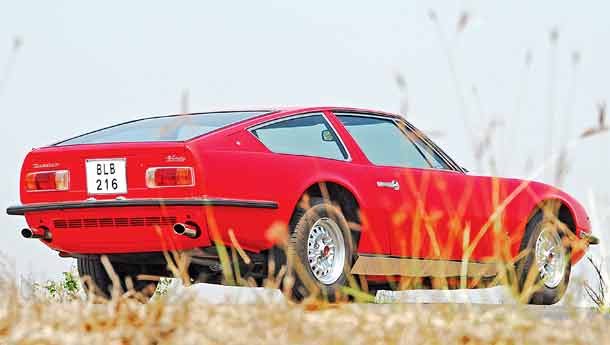 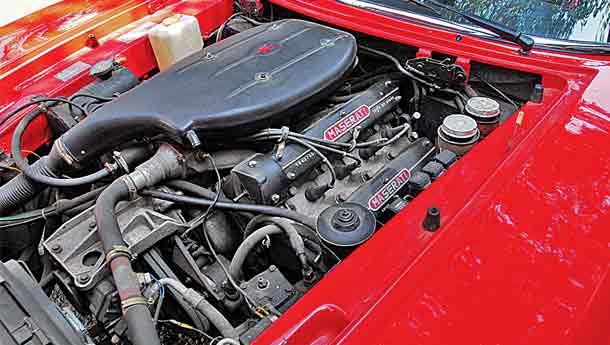 It’s bloody hot out there. And in here too. This damn Maserati is so aerodynamic that not even a wisp of air enters through either of the two windows which I have left open. The airconditioning system is also switched on, but its settings are just perfect for a blast around the Tuscan countryside rather than the Maharashtrian coastline in April. I am in fourth gear, and at 2000 rpm, the car is just crawling. Thirst. A huge thirst for some chilled water. I am so drained that I don’t want to move a muscle. Not even to shift a gear. Besides, the clutch pedal is too tight. And the gear lever a bit too notchy. I don’t have any energy left, and the little that is remaining is channelled towards the right leg.

Well, it’s time to experience the miracle of a V8. A gentle pressure on the pedal and the engine develops a sense of urgency that is evident in the throbbing from the twin pipes that’s transformed into a muscular note. No downshift necessary. The flexibility of the V8 is so immense that the Indy effortlessly and without hesitation picks up speed. Thirst relief, here I come.

Well, it is summer. And this is the Summer of Speed special. And I am driving what is arguably one of the fastest grand tourers of its era. Even the name of the Maser indicates speed. The Indy name comes from Maserati’s victories at the Indianapolis 500 in 1939 and 1940. A certain gentleman racer called Wilbur Shaw managed to convince an American industrialist to sponsor a European car to race at the famous event, and then went on to become the first race driver to earn consecutive victories at the Indy with his Maserati.    However, almost three decades separate the victories and the launch of this GT. The Indy was first seen at the Vignale stand at the Turin Motor Show in 1968, while the production model was unveiled at the Geneva Motor Show the next year. So I have no idea why Maserati named this car the Indy. It could be that Citroen, which was the owner of Maserati at that time, wanted to plug the car for the big US market – you know, kind of strike a chord with the Yankees by calling it Indy. It could have worked, as this GT was not exactly cheap. Maserati managed to produce and sell 1,136 units of the Indy between 1969 and 1974 (three engine versions: 4.2, 4.7 and 4.9 litres). One of the 364 4.7-litre versions produced landed in the hands of, yes, you guessed it, your friendly neighbourhood F1 team owner, Dr Vijay Mallya, who ordered a much-needed, comprehensive restoration of the car.

The Indy was a better-than-expected replacement for the Maserati Mexico, a 2+2 GT based on the 1960s Quattroporte. Where the Indy was better than the Mexico was the brilliant lines crafted by Vignale. Look at it; does it appear as if it can fit four fully-grown adults in comfort? It does. Though you cannot make it out by seeing the pictures, the Indy is actually quite wide and tall, yet Vignale have ensured that the proportions are just right. It may look bulky at the rear, but that’s about the only crib you can make about its almost flawless lines. The glass hatch opens up to a fairly large luggage space, which could have been more spacious were it not for those fuel tanks intruding into the zone. Fuel tanks? Yes, it has two fuel tanks that have a 50-litre capacity each, the fuel flow of which can be controlled by a switch on the dash. The Indy was also special in the sense that it was the first car wearing the Trident to feature unitary construction. The body was welded to the chassis and offered a level of stiffness that was not present in other road-going Maseratis.

But that was then, and this is now, 38 years down the line. Driving the car over rutted roads, the vibes seep through from the Michelin rubber and the classic Borrani wheels. Heck, this poor car wasn’t meant for such surfaces. However, given the right kind of roads, it could go from standstill to 96 kph in 7.5 seconds, 0 to 160 kph in 17.6 seconds and attain a top speed of 265 kph.The piece de resistance of the Indy is of course Maserati’s classic, time-tested V8, borrowed from the Mexico GT. Displacing 4719cc, the eight-cylinder motor features double overhead cams, but surprisingly, only two valves per cylinder and not a four-valve layout even when the Italian firm had the capability. Surprising, because Maserati used to make cars in its illustrious history primarily for racing – the difference in the road-going Maseratis were headlamps, I suppose! The size of the Indy is best felt when you can see that there is plenty of space remaining beneath the hood despite the presence of a big engine. The V8 is a proper Italian thoroughbred, developing 290 bhp at 5500 rpm and 39 kgm at 3800 rpm, massaged by a quartet of Weber carburettors. Power is despatched to the rear wheels via a five-speed manual transmission, while a three-speed automatic version was also available as an option.

You sit in a bit of a crouched position thanks to the raised pedals, and are confronted with a vast array of instruments – Veglias with Italian words spread all over them. The Indy originally came with one of those sporty Nardi steering wheels, but here, it is retrofitted with a Sparco unit. Nevertheless, that doesn’t take much out of the overall driving experience, what with that ballsy V8 overwhelming almost everything about the car.   Today’s cars take pride in having low NVH levels, but in this car, it looks like there’s no concept of such an exercise – and I don’t mean it in a negative way. The rorty exhaust note fills up the cabin, while like a good American car, it rocks on its haunches. You really feel like you are driving something special, you are conscious of each act, be it leaning along with the steering wheel into corners, stomping that clutch pedal or thrusting the tall gear lever into position. However, let me add, it’s kind of nice only when the weather gods are a bit considerate, and not in this sizzling heat.

The V8 is spectacular and the power in each gear is endless; you have to virtually force yourself to shift, let alone redlining it at 5500 revs each time you want to change gears. The vast amounts of power and torque available across the rev range means that you can potter about lazily and at the dab of the right pedal, change into an angry animal in an instant – it just growls and yanks the rest of the car from its stupor like a locomotive.Because of a decent weight distribution between the front and rear axles, the Indy offers breezy and involving handling. The front is independent, with a double wishbone and coil spring setup, while at the rear, Maserati compromised with a live axle with radius arms and semi-elliptic leaf springs. Compromised because it was an expensive grand tourer and needed to be nice to rear passengers as well. Over bad roads, the ride was a bit harsh, while it could also unsettle the rear end a little bit. But it’s all right, considering such cars
were not destined for our roads anyway.

On good roads, the car’s dynamics were brilliant. You could push the V8 nestling at the front and the rest of the car, despite its bulk, would hunker down and follow the curved line. You’d never realise it is a really wide car and like a true Italian, loves the rush of speed. Being fast is its natural state. Gives me an idea – I wonder what this car would have felt like on the Indianapolis circuit?