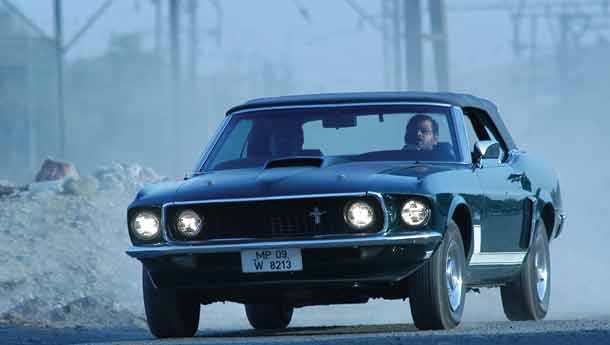 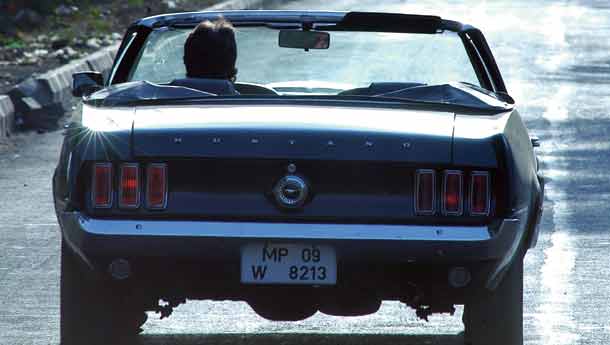 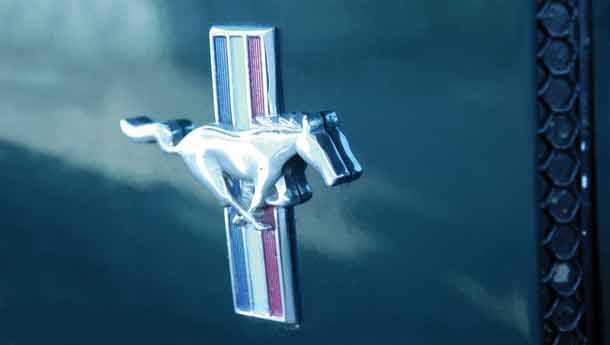 What can I tell you about the Ford Mustang that you already don’t know? It’s every boy-racer’s dream in steel and oil. Even today, forty-one years after the world first saw it, the Mustang still excites like no other American car ever did. To me, if there’s one American car which I really desire, it’s a Mustang like this from the 1960s – true-blue American iron with the stars-and stripes embossed in it. No, not even the Corvette, which is in a different league – well, if we’re talking supercars, I’d take a Ferrari, thank you. But a Mustang... well, can you think of any non-American equivalent to the original pony car? Any alternative to this automotive wallop in your face? Think hard, you won’t get any.

Heck, even Ford of Europe’s riposte to the Mustang – the Capri – couldn’t come close to the original. No subtle, graceful Italian lines. No German craftsmanship or technology. No well-balanced British handling or roadholding. No quirky French innovations. It has none of these fine attributes that usually make classic cars classics. Instead, all you get is an automobile with a simple, single-minded purpose: it wants to head out to the highways, while along the way, outgun every single other car at the stop lights. Did I just define what makes a muscle car? You bet I did.

Shoehorning massive engines in smaller cars in an attempt to out-drag the competition was something every teenage kid in the US was doing in the 1960s at his neighbourhood mechanic’s. But it’s only when car manufacturers decided to offer the same combination from their factories that the muscle car phenomenon really took off. But what makes the Ford Mustang different from other muscle cars of that era, like the Pontiac GTO (the one that actually started it all), Plymouth Road Runner, Dodge Charger or the Chevrolet Camaro? Well, it was the most well-proportioned, best-looking of them all. The rest of them look like caricatures compared to the Mustang’s athletic,no-nonsense look. Compared to other American cars of that era, the Mustang is over-understated, if you get what I mean.

The Mustang was launched at the World’s Fair in Flushing Meadows, New York on April 17, 1964 and immediately established the classic pony car look – a long hood that signified power, a short rear end and muscular flanks. It received a minor facelift three years later, and its body was made wider and longer. But it’s this, the 1969-era Mustang that’s the most aggressive looking of them all. With a gaping mouth that looks as if it would swallow Ford Pintos raw and four sharp piercing eyes, I bet you would immediately pull over when you saw it in your rearview mirror. And while you’re still gaping at it, you could drop your jaw looking at this Mustang do its party trick – at the press of a button placed on the dash, the canvas roof folds up pretty neatly and transforms it into a sun-seeking convertible.

In 1969, Ford was offering a ‘steed for every need’ – a total of 11 different powertrain combinations for your dream car. One of them was the 302-cid engine, a 4923cc V8 that was introduced just the year before. Developing 220 hp, this workhorse sends all that grunt to the rear wheels through a three-speed automatic transmission. And to a throbbing exhaust beyond. The steering wheel is a deep, sporty three-spoke unit, with the famous Mustang leaving you in no doubt which car you’re in. The dash is completely padded and is divided into two cowls, with all the dials on one end – alternator display, a speedo marked up to 200 mph, and other indicators – and on the other end is a lone clock. But it is the vision above the steering wheel, of the business end of the Mustang, that puts everything else in perspective.   The T-shaped gear lever may be a little woozy after over 36 years of use, and when it eventually snaps into place in D, the Mustang lets out an involuntary shudder. Dab the accelerator pedal, and you can sense the Mustang mull over what you have just done, and then, wham! it’s off, with the rear wheels propelling the mass in an unrelenting forward motion. After that, it’s between you, the car and the road and nothing else. The feeling is that of somehow reining in a beast, having to beat it into submission to allow other road users also to, well, use the road. It’s just about civilised with a tender right foot, chafing at the need to have some road manners.

Once the road clears a little bit and with a slight pressure on the pedal, the Mustang bolts as if it’s lost valuable time. Then it’s the car that’s controlling you and not vice versa. The horizon comes to you at a faster rate and all you are doing is hanging to the steering wheel for dear life. All this drama, from an engine that doesn’t even pretend to be a tyre-shredder. It’s a straightforward piece of American iron, displacing plenty of cubes to cruise the Land of the Free, and if you insist, it could to the 0 to 60 mph (96 kph) dash in about seven seconds, and attain a top speed of about 175 kph. However, for the Land of the Brave, this same 302-ci unit, breathing through four carbs in the Boss version and developing um, 290 mustangs, or the Boss 429 V8, could easily lay a thick coat of rubber all the way from the stop light to Nebraska. You need to anyway drive all the way there to take a turn, because with the absence of power steering and a front-heavy bias, it takes Arnie-like arms to execute any of those three-very-large-pointed turns.

With an independent front suspension at front, comprising coil springs and wishbones and semi-elliptic leaf springs at rear, it does a good job of protecting you from the vagaries of the road. But I am not sure whether the suspension or that chubby rubber is capable of keeping its tail tucked in under the slightest of provocation – well, I sure am not going to try it on public roads.

Yet it’s this raw, mechanical feel of the Mustang that simply captivates you.Like I mentioned earlier, it’s about as single-minded as it gets – you just want to fill ’er up with a tank of gas, get some Ray Charles or some twanging country guitar in the tape deck, wear your horn-rimmed Ray-Bans and watch the endless miles disappear in that gorgeous chromed door-mounted mirror. In this case, the journey will truly be the destination.   PLANNED MIRACLE

The creation of the Mustang – dubbed a ‘planned miracle’ – has been rightly attributed to Lee Iacocca, the legendary Ford executive who would go on to become a champion of the US automotive industry. Iacocca, an engineer who went on to sales, remembered how people pleaded with him to bring back the sporty two-seater Thunderbird, which had been transformed into a four-seater saloon. It was also a time when there were plenty of baby boomers in the US and there was enough money going around. The market was thus ripe for a sporty, personal car, which would step into the now vacant spot left by the two-seat T-bird. And the Mustang was born.

Though gorgeous to look at, mechanically, there was nothing pathbreaking about the new Mustang; sharing the Ford Falcon’s parts bin made it cheap to produce. What really made it a mighty success was that, at $2,368, the entry level Mustang was priced at not more than that of a VW Beetle. But the key trigger was a huge options list that you could tick in the order form to make your Mustang that much more personal. Engines, gearboxes, upholstery, stickers, seats, disc brakes, power steering, airconditioning, handling package... everything. You could have a 100 bhp commuter Mustang or a proper hot-rod version, and each member of your family could have their own Mustang variant. In fact, in 1965, customers went for options worth $1,000 on an average over the base price. Iacocca estimated that it would take a year for the Mustang to reach the 100,000 sales mark – it only took four months. The Mustang sold 417,471 units in its first year, and by 1966, topped the million-unit mark. Performance editions like Carroll Shelby’s GT350 and GT500, and the Boss and Mach 1 took the Mustang’s reputation even further. However, emission laws and oil shortages in the 1970s severely emasculated the Mustang and it remained a pale shadow of its former self, only to somewhat recover in the 80s.

The Mustang first looked like this. Below, a US Mail stamp issued in its honour in 2000

CALL OF THE WILD

The name Mustang came from the WWII fighter plane, the P51 Mustang – it was one of Ford’s chief stylists’ object of affection

The immense sales success of the Mustang prompted a Michigan baker to advertise with this line: ‘Our hotcakes are selling like Mustangs!’

The first concept Mustang in 1962 was actually a mid-engined 109-hp V4 two-seater, but was deemed too complicated and expensive to mass produce. The concept made a public debut at the US GP held at Watkins Glen, New York, when it was driven on the track by Dan Gurney

The horse on the logo is surprisingly running in the wrong direction – it’s opposite the way horses run on race-tracks in the US. Anyway, mustang means a wild horse with a mind of its own

One of the Mustang’s first ever customers on the US East Coast slept in the car overnight to ensure it wasn’t sold to anyone else while his cheque was being cleared. Should have paid cash

The Mustang of course was a Hollywood star. Without argument, it’s finest role was in the movie Bullitt, where Steve McQueen chases the bad guys’ Charger in his 1968 Highland Green GT390