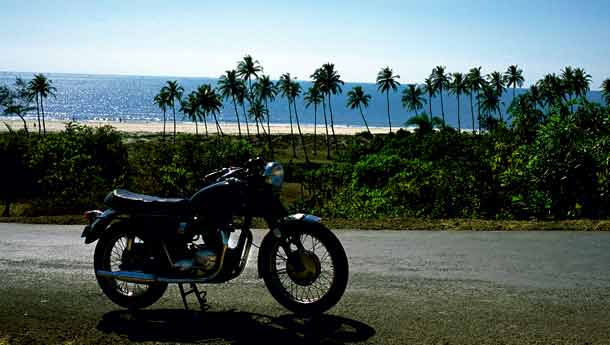 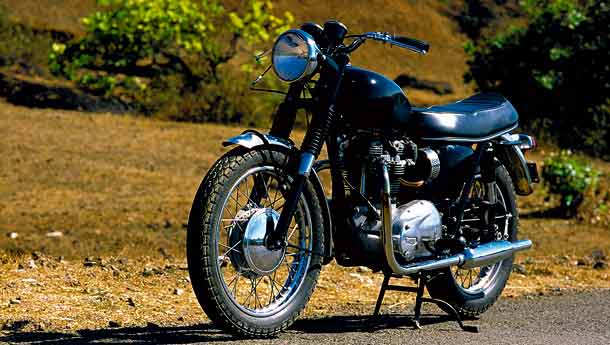 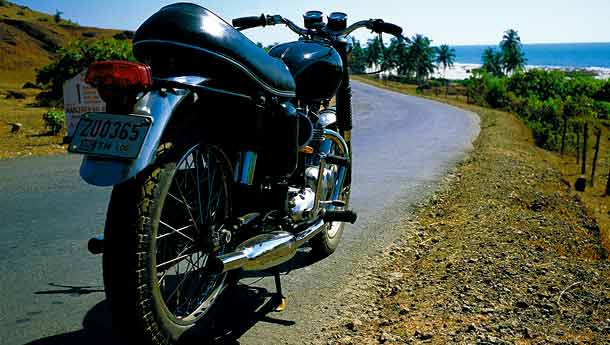 There I was, sitting in a beach-front restaurant in Goa, nursing a cold one, gazing at an impossibly blue sea and feeling indecently pleased with myself. Waiters wafted around politely, a cool breeze blew in from the ocean and all was peace and harmony. Then I heard it. At first it was a soft ‘whoosh’ that came from around a bend on the road above the restaurant. Some other people registered mild interest and then went back to whatever they were doing. The whoosh rapidly developed into a great big wall of sound, a deep-throated roar that was tinged with a metallic edge, like a permanent cymbal-crash. By now, every single head in the place had turned towards the road, and what they saw was the proverbial sight to behold. A gleaming, black Triumph Bonneville, all menace and bad attitude, tore around the bend. Astride it was a beaming Jan Lang, proud owner and long-time classic bike enthusiast. He coasted to a halt in the parking lot and lovingly ran his hand over the fuel tank as he walked towards my table. ‘Hank’ was in the building.

‘Why “Hank”?’, I asked Jan as we chatted about his fantastic machine. ‘There’s a story behind that,’ he said, and proceeded to narrate it to me. He had named the bike after his good friend, an American who had settled down in Goa. Hank’s father had bought the bike in 1965, in Memphis, Tennessee. Officially, Hank got it two years later when he was 16, but had in actual fact been riding it since he was 14. Here we digressed slightly while I wondered aloud about life being unfair. I mean, think about it. A Triumph Bonneville as your first bike? I cringed as I cast my mind back to my own first ride, a Hero Honda CD100 SS.

Getting back on track, Hank drove it around for a few years, until he was bitten by the travel bug. He shoved off to Europe, where he eventually ended up working on yachts in the playgrounds of the rich... Nice, Monte Carlo, the Cõte d’Azure, Malta and the like. His last command, as a full-fledged Captain, was Vijay Mallya’s 50-metre yacht, the ‘Kalizma.’ This yacht, incidentally, was previously owned by that shining example of married bliss, Elizabeth Taylor, and Richard Burton, one of the many notches on her arm. That’s how Hank eventually ended up in Goa, since the ‘Kalizma’ was to be anchored here during the party season. Jan bumped into Hank at a local Bullet dealership and the two became firm friends, both being ‘bad boys’ with a similar interest in bikes. Hank decided that he would make Goa his home, bought an old house and planned to have some heirlooms shipped over from America. Among these was to be the Bonnie, which had sat idle in a garage for many years and needed a complete make-over. This task was left to Union Jack Classic Motorcycles in Memphis, a renowned restorer of vintage motorcycles. It wasn’t cheap, but the brilliant result (rebuilt to TT specs) was shipped to Goa three years ago, with only 9 km on the re-set odometer.   Tragically, Hank himself never got to enjoy the bike, let alone even start it. Our ever-helpful customs people made sure it sat in their godown for over a year, and when the mess was finally resolved and the bike was in his garage, Hank fell ill with leukaemia. He lost his battle with the disease in January last year, passing away in Marseilles. When his widow came down to Goa a year later to settle his affairs, Jan told her that he was interested in acquiring the bike, which is how he now owns a classic 1966 Triumph T120 R Bonneville, TT spec, in the 31,000 serial number region of all the 70,000 or so T 120’s made.

The only differences between this bike and an ‘ordinary’ T 120 are the ‘R’ cams, the high compression (11:1) pistons and the ‘R’ rockers and tappets. The TT spec Bonneville puts out 46 bhp@6500 revs, which is 7 bhp more than the stock T 120 R and around 10 bhp more than the UK T 120. This bike still has two silencers and a headlight, something which a ‘pure’ TT model would not, being a thoroughbred track machine. A Bonnie also has two of everything; two cylinders and pistons, two sparkplugs, two carbs, two exhaust systems, two air-filters, two CB points, two ignition coils, two petrol taps (one for each half of the tank, connected at the carbs) two meters (rev and speedo), two throttle-cables, and as a 1960’s standard, it even had two 6-volt batteries connected in series to give it 12 volts. Hank, however, sports a single 12-volt battery.

Jan says you also need two wallets and twice the patience to tune the two carbs and all the other twin systems! But when all is well, it also runs twice as fast as most bikes. In mint condition, it still has Tennessee registration plates on it, and has never run in India before this photo shoot!Triumph Bonnevilles were built for one thing, and one thing only – speed. Indeed, they were named after the Bonneville Salt Flats in Utah, USA, where Triumph were setting new landspeed records with a streamlined, torpedo-shaped two engine racer in the 1950’s. It was, until the 1970’s and the Honda CB 750 came along, the fastest standard motorcycle around. A 190+ kph machine, it will acquit itself with considerable honour even against modern bikes.   I tell you, the roar that bursts out of the exhausts when you start it up is something else. It’s unsophisticated, perhaps even crude by modern standards, but it is guaranteed to plaster a grin all over your mug. The high-compression pistons mean that you need to really put a lot of beef into the kick-starter. Hank is in ‘Racing Mode’, meaning that there are no choke sliders in the carbs. You have to give it a little extra fuel with the float ‘ticklers’ until it runs even. It rumbles gently at idle, but when you whack the throttle open you’d better be prepared for what seems like a kick in the backside from a large horse. Acceleration is immediate, and power seems to flow in an unending wave until you run out of road or nerve, or both. Happiest at high speeds, the bike will nonetheless glide in fourth gear at 30 kph, until you decide to have some fun again and let it rip. Steering tightness is adjustable with a knob below the meters, for better stability at higher speeds. The slick gearbox and the light clutch make for fairly effortless shifting, once you get used to the right-side shifter. Braking is adequate, with the engine itself adding a lot of stopping power. This bike was no slouch on the track in its day, so handling is precise and assured.

Jan is taking Hank back to Europe this month, where the roads are better suited to a machine of its ability. Perhaps it’s only fitting, considering that his good friend spent the best years of his life there. Hank will probably get to roam all over Europe’s great biking roads, something its original owner never got to do. Can there be a better way of paying tribute to someone’s memory? I’d be hard pressed to think of one.

BONNIE TO BE WILD

Triumph is one of Britain’s oldest and most well known manufacturers, producing their first motorcycle (literally; they strapped a motor onto a bicycle) in 1902. In 1936, the company was bought by the owner of Ariel (another well-known manufacturer), who appointed Edward Turner as chief designer and general manager. Turner was a genius, and the company’s fortunes saw a dramatic upswing with many improvements made to exisiting models. The Speed Twin, the Tiger 100 and the Thunderbird, new models all, were tremendous successes as well. However, no name evokes fonder memories than ‘Bonneville,’ their most famous model. First released in 1959, the 650cc twin went through several iterations (the first one was essentially the existing Tiger 110, with optional splayed inlet ports and twin Amal carbs) in its 14-year history. Raced with great success and much loved by street users, the Bonnie has become one of the legends of motorcyling history.