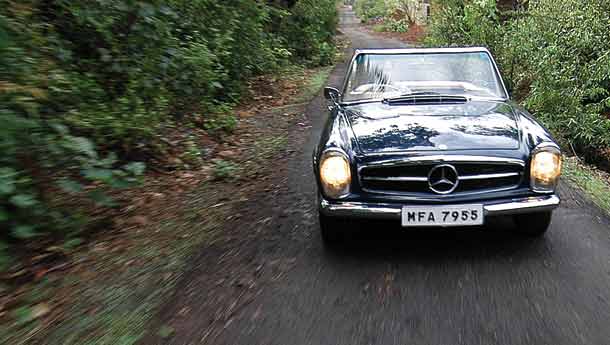 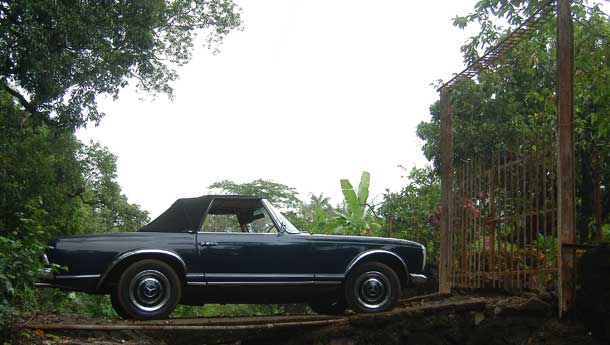 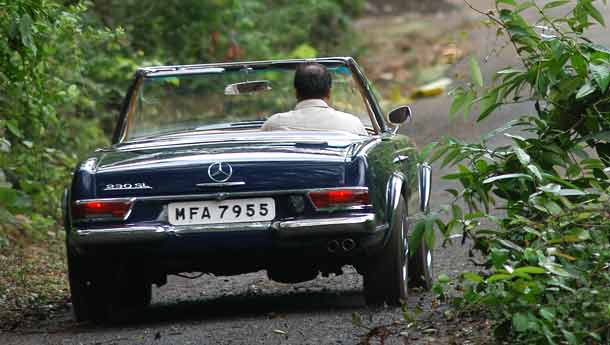 There’s something about wind-in-the-hair motoring, even if there is only wind and no hair. And the feeling is magnified a hundred times for me when the roadster is a Mercedes. Add another hundred times when the Mercedes in question is wearing the hallowed SL badge. Okay, so it’s just a 1966 230 SL and not THE one. Still it’s an SL, no? Today, the 230, tomorrow the 300.

The elements that make up this drive are just right. Even if this car weren’t a Mercedes, nobody can argue against the perfect combination of a straight-six at the front that powers the wheels at the back (heck, BMW is at it even today, at a time when V6 engines are the norm). Since I am not driving in Mumbai, the iconic pagoda roof is also off, so I can enjoy the unpolluted air of Khandala, a hill-station close to the metropolis. And finally, I have an extremely narrow and winding piece of empty tarmac with rain-dripped foliage virtually forming a canopy all along the way.

It’s a beautiful setting, it’s all so cosy and quiet, the birds are settling down for their afternoon siesta, and even the insects seem to have stopped buzzing when... phwooaar! The loud, muscular exhaust from the SL wakes up the neighbourhood. If I am having fun, I guess I shouldn’t be selfish – let others share in it!

From the driver’s seat, the view is brilliant – most of the time you seem to be looking through the steering wheel, it’s that large. The trees are zipping past in a blur and the ribbon of tarmac is being looped in rapidly by the SL. I like the way the horn ring on the steering wheel has been flattened at the top so that your view of the instruments are not blocked. Cool.

The power bump on the hood sits right there prominently at the front – it was not a design feature, but a necessity to accommodate the engine without losing the bonnet’s low profile. Beneath the bump is a 2306cc inline-six with a single overhead camshaft that develops 150 bhp at 5500 revs and 20 kgm of torque at 4200 rpm. This inline-six was taken from the famous W111 fin-tail saloon and adapted for use in the SL – displacement was upped by around 100cc, while a new Bosch six-stage pump was incorporated that injected fuel directly into the combustion chamber rather than the intake manifold. Yes, it featured gasoline direct injection then!   What that translated to was breezy performance from that strong motor. At low revs, the 230 SL doesn’t seem to be too excited to go anywhere, but once the revs build up, things get pretty enjoyable. The four-speed transmission was also borrowed from the sedan, and only the first gear was modified to be adapted in the SL, to allow for better initial acceleration. Mercedes claimed a 0 to 100 kph dash in 9.7 seconds, while top speed was a whopping 195 kph. The gearbox comes through as a strong unit, and the throws are not as short as you would expect in a sports car. Yet, it’s fun to shift, in a 1960s kind of way – it’s sure-slotting, has a pure, mechanical feel and fiddling with that round gearknob is addictive. A four-speed automatic was available as an option (Seems sacrilegious, doesn’t it? Yet the auto’box was quite popular!), and towards the end of 1965, Mercedes introduced a new five-speed transmission from ZF.

This car carried over the same innovations that were to be found in the W111 series. The gorgeous, well laid-out dash, the padded doors, there’s nothing poky anywhere around the driver or the passenger, while the steering wheel column was designed to absorb impact. What’s also not obvious to the eye is that this SL had crumple zones at the front and rear and a rigid passenger cell. Today, it’s a given, but in the 1960s, Bela Barenyi’s ideas were nothing less than path-breaking. Okay, so it’s a bit of an effort to shave off speed, considering it has drums at the rear, but subsequent versions of this SL – the 250 SL and 280 SL – did come with disc brakes. For the moment however, I am not going to test these brakes vis-à-vis the strong performance from the engine.

Unlike the 300 SL, and to an extent the 190 SL, this car seems to be a combination of a sports roadster and a tourer. Yes, the automatic gearbox is one example, while the other bit is the suspension donated by the W111 – consisting of wishbones at the front and swing axles at rear, with coil springs and telescopic shocks at both ends – which is tuned to offer a refined ride. It keeps away most of the rough patches on the road, not something you would expect in a sports car. Yet, a comfortable ride didn’t mean a compromise when it came to handling. The SL stuck to curves – even if they were wet with generous contributions from the clouds – confidently, which led to my own confidence levels rising with every corner I took. Actually, Mercedes engineers had worked on the low-pivot swing axle rear suspension for quite some time to make it predictable and safe. Besides, it was the first SL to feature radials too.

For a roadster that stepped into two large shoes, the W113 SL had its job cut out. It had two ancestors, the 300 SL and the 190 SL, and the top bosses at Daimler-Benz briefed the engineers that the one car that would replace these two had better be economical to build (in other words, develop it from an existing series) and be contemporary and beautiful to look at. And while at it, make it user-friendly and plush too. So the new body too was fitted on the ever-ready, shortened W111 220 SEb chassis (BSM November 2003).

A far cry from its curvy predecessors, this SL is straightforward and clean to look at... and I would say its lines are future-proof. The vertical headlamps bracket a strong chrome-surrounded grille, and at the centre is a large, prominent star. This front-end treatment is fantastic to see even today, but my favourite view is the profile, where the upper lip juts out prominently – it’s not too obvious when viewed front-on, but to me it’s aggressive and characterful, especially in this era of rounded, pedestrian-impacted designs.   When the 230 SL debuted at the Geneva Motor Show in March 1963... you expected me to say it created a sensation, didn’t you? Ha ha ha, fooled ya. No, it didn’t exactly create a flutter like classics often do. It was not exceptional in design, though that pagoda roof was considered too avant-garde. Yes, that roof. If you wanted, you could order the 230 SL with a soft top, and you could also ask for this detachable hard-top roof. It was shaped this way – purportedly by Frenchman Paul Bracq who is credited with the subtle fins in the fin-tail Mercs – to create a light or ‘airy’ effect. Viewed from profile, the top does sit lightly on the large windows and when viewed front-on, the sides rise while it caves in at the centre – giving it that pagoda look. That’s it, but the name has stuck and how.

And the roof may look light, but it certainly isn’t. It took four of us full-bodied alpha-males to take it off and put it aside. Oh, and it was also criticised as being a woman’s car, like the 190 SL, but something happened that shut people up. A hotelier from Stuttgart called Eugen Bohringer and his team-mate Klaus Kaiser took the newly launched 230 SL, prepped it up and participated in the gruelling Spa-Sofia-Liege Rally – considered the toughest in those days – and won it comprehensively. To shut people up even further, the 230 SL came second in the same rally next year.