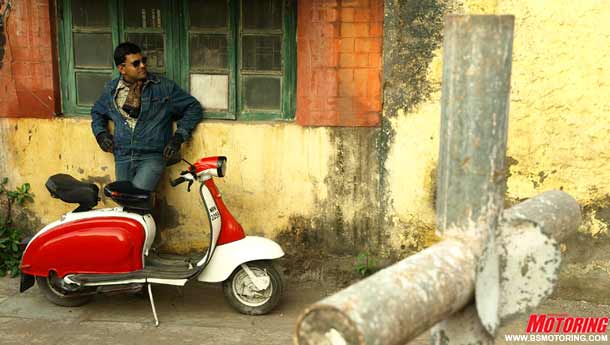 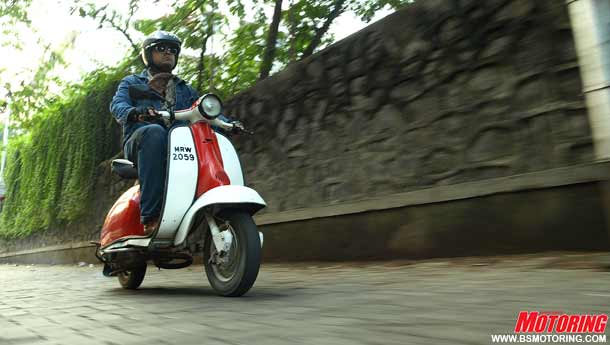 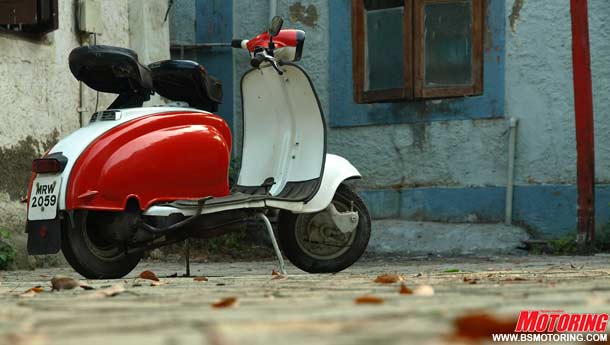 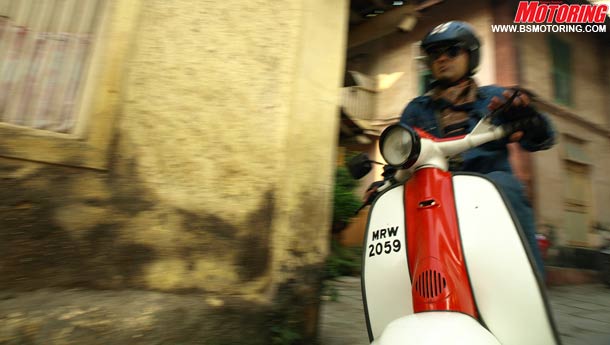 A cool zephyr catches my silk scarf, flopping it gently onto my jacket as I move along onward. The typical splatter of the 150cc two-stroke heralds my arrival well before I actually reach. She hears the banter, and I can see the smile on her face. She's looking splendid in that floral top with a bright mini skirt. Ah! These are good times, happy times. It's hard to believe then, that my ride began to take shape in the aftermath of horrible bloodshed.

They say war kills lives, but breeds ingenuity. Throughout history, the pace of progress has accelerated tremendously during or immediately after the gloomy pall of the fighting has passed over.

As cities began being rebuilt and the guns of the second world war were silenced forever, the once buzzing factories churning out weapons now had nothing to manufacture. With the spare capacities on hand, manufacturers went about to address the newest need of the masses - transportation.

Years of fighting had cost the world dearly. Economies were in the doldrums and resources were scanty. People needed transportation and it had to be cheap to buy, run and maintain. Rationing of fuel also meant that it had to be fuel efficient as well.   Despite having it's origins before the First World War, it was in these troubled times that the scooter as we know it began to evolve. Having being denied permission to continue making planes, former aircraft manufacturer Piaggio, in 1945, started dabbling with a set of two wheels and a small capacity engine mated onto a monocoque frame with legshields - a scooter! About 100 of these scooters were built and later, a new model was unveiled - the Vespa which was the Italian word for wasp.

Another giant began to take form when another Italian firm named Innocenti, that previously manufactured bodies for 150 and 250 kg incendiary bombs and other munitions, launched its solution to cheap transportation for the masses in 1947. The Model A, initially called the Lambretta M, was a naked tubular-framed scooter with small wheels and no suspension nor substantial protection from the elements. What followed shortly was the Model B which was basically a Lambretta M with proper suspension. Lambretta grew from here on and Innocenti clung dearly to its trademark tubular frame scooter design for most of their later models.

Although their progress stemmed from troubled times, during the sixties, Lambrettas came to be known as the ultimate symbol for all that was good and happy and had a certain kind of cool quotient that few other machines could surpass. Filmstars rode them, the Hippies embellished them with peace symbols, the Mods loved them and the Rockers punched as many of them as they could find.   India was awakening as well, and Indians being humans too, needed economic runabouts. In that light, the government set up S.I.L. (Scooters India Limited) in Lucknow in 1972 when Innocenti was going under. S.I.L. bought over the entire factory tooling and machinery and the first scooter produced was the Vijai Super - basically an Indianised GP 150. They later went on to export 'Lambretta' scooters abroad, ironically, even to Italy!

Another Indian connection with Lambretta is a public limited company, called A.P.I. (Automobile Products of India), which was first set up to produce the Lambretta Model D under license from Innocenti. As they veered more into the three wheeler market (where they still exist to this day), A.P.I., turned to a Japanese design company called Miyazu to spruce up things a bit, and the Lamby Polo was born. Sadly, this scooter never sold too well, but the Vikram range of rickshaws, derived from the Innocenti Lambro three wheeler, still continue to trudge along on Indian roads.

Irrespective of whose production line this 1954 Li 150 rolled of, it is certainly a great and fun scooter to ride. The Italian flair for design comes through clearly, with the gracefully tapering dew-drop styled side panels covering up all the mechanicals and the footboard standing proudly, keeping the muck off your pants.

The front mudguard is rather bulbous, especially when compared to that of this scooter's successor, the Lamby 150. The side panels are fuller too, and quite unlike the Lamby's indented panels with the wing monograms.

But make no mistake, this scooter is not only about flair, style and all of that. It's a scooter after all, and the whole point of it being one is that it ought to be practical and comfortable. The ample sized footboards for the pillion rider are huge, nearly 2 feet in length and about 6 inches in width. In fact, the brochure of the Lamby has photograph of a family of four, seemingly all happy and cheerful, riding the scooter without helmets. Imagine getting away with that kind of publicity today!   The Lambretta Li's two-stroker, 148cc, force air-cooled motor produces 6.5 bhp at 5300 rpm. If you think that's puny, I'll have you know that a very popular Japanese marqued scooter sold in the country today produces 8 bhp at 7500 rpm from its 109 cc engine. These numbers just go to show how ahead of its time this scooter actually was and how seemingly current it continues to be.

Another fact that proves that the Lambretta design was pure genius is the way its engine is mounted onto the frame. Unlike the Vespas that had their engines bolted onto one side of the body, the Lambrettas had their motors slung centrally onto the tubular chassis. This endowed them with far superior handling dynamics than their peers at the time.

Riding this near-5 decade old scooter today isn't an exercise in patience nor concern. The scooter is peppy as ever, ready to be put through its paces with great eagerness and the brakes make it quite easy to bring to a halt. More than willing to keep up with today's traffic conditions and more, the Lambretta is a deft handler and just the thing to guarantee a crowd of admirers wherever you park.

Owning one of these period scooters is far from being as harrowing an experience as it is made out to be. Maintenance is easy and far in-between - I ought to know, having owned MRW 2059 for more than five years now. I bought it as a wreck, neglected and thrown in a corner. Despite not having been started since the eighties, all I had to do to fire up the old scoot up was clean out the carb and points, get hold of some petrol-oil mixture and put in a new plug. Five kicks later, it started. An entire power train rebuild and tinwork followed shortly and the red and white Lambretta has been puttering around without a hitch since.

If you're looking for something that sums up the real you, go on and buy yourself a Lambretta. They don't cost the earth - about Rs 10000 for a really good specimen, return close to 40 kph to a litre of fuel when ridden with care and last but not the least, look pretty darn cool. Spruce it up with mirrors and lights to make it unique, make it go quicker with a ported block, expansion chamber and a hopped up carb or keep it just as the company made it. Whatever you do, this is certain, you will have a wide smile plastered across your face every time you ride that Lambretta!