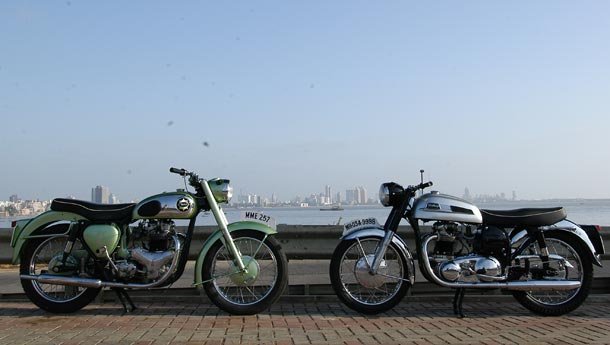 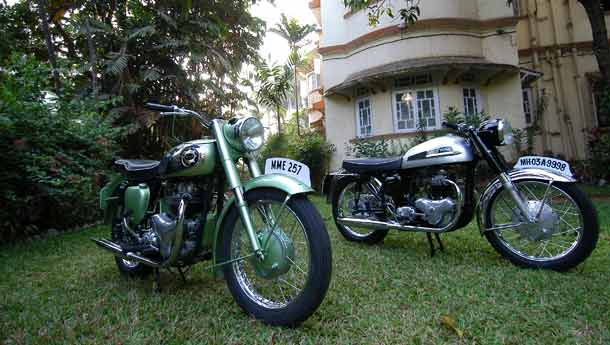 So let me introduce you to the two machines and men astride them, so we can get on with the rest of the story. In one corner we have a Dominator 500SS, a Norton of 1964 vintage that’s owned by Bhomi Boyce – the 60s racer I mentioned earlier. And in the other is the famous BSA Shooting Star A7, a 1958 model that has just been restored for Ashwin Naik, a criminal lawyer by profession. This Shooting Star adds to Naik’s vintage collection of a 1962 Honda CA77, a 1920 Sunbeam, a 1960 Mercedes 180D and a 1961 Opel of some sort. The Shooting Star was weaned from its first owner who imported the machine to race it back in 1976 – so along with the motorcycle came an engine that was tuned to race spec. As for the Dommie, she’s been owned by Boyce since 1981 after he was inspired by his father, who rode a 1947 Indian. It is his first and only classic machine amongst the host of Bullets, Jawas and Yezdis that he’s owned and raced over the years at the Juhu airfield.

And with his curled-up moustache, black leather boots, half-cuff gloves and pudding bowl helmet, it seemed like Boyce had stepped through a time portal in 1960 to arrive at the shoot. The Shooting Star arrived with no less impact, as it thundered through the air purposefully just like it did when it was first launched to counter the Triumph Tiger 100. The A7, BSA’s internal designation for the Shooting Star, was put together mainly by chief engineer Val Page who worked closely with Herbert Hopwood and Edward Turner at Ariel. The three of them were working on a cheap, easy to build parallel twin engine format. Turner stuck with Ariel to design the KH and Hopwood moved to  Norton and built the Dommie – a reason why all Brit marques look pretty much alike.

The A7 shone in pearlescent green (BSA coined that shade, not me) in the evening sun while the Dommie had Pablo wishing he was invisible. The gleaming chrome all over the motorcycle made the polychrome grey (this time it’s Norton doing the marketing) tank look pale in comparison – and reflected Pablo in virtually every shot he took. The A7 had a touch of design to it, with a more refined nacelle, two-tone tank and the BSA monogram embossed in a Golden Star. They obviously had to work on the looks, because it didn’t match the Tiger 100 for pace. They even painted the chassis in a deep green on many A7s to give them a distinct look. Okay, I lied about that, the deep green paint. It found its way onto the chassis from the nearby cycle department, as the A7 paint shop frequently ran out of paint. A drip tray was also incorporated into the later models of the A7 to take care of those blazing riders. BSA later realised that it wasn’t the riders but the petrol overflowing from the carburettor onto a dynamo under it.   Boyce, who’s never raced the Dommie, swears by its handling. The motorcycle is set in chassis-tuner Rex McCandless’ featherbed frame, after all – the be-all and end-all of all post-war Nortons. In fact the only thing that kept the Norton competitive almost ten years after the engines were obsolete was the chassis design. Bert Hopwood, a known self-publicist, naturally claimed his engine design was better than his erstwhile colleagues from Ariel. Actually it was second only to Triumph’s Speed Twin. But on today’s ride I’d have to say Hopwood had every right to shout about his achievements. The 500SS had a very refined feel to its engine, with the only problem being the kick start. It really shouldn’t be called that. Stand-on-lever-and-jump would be an ideal name. Boyce, of course, can fire her up with one heave. Thank you very much. Now that I’m astride it, things are much easier.

The Dommie feels pretty much like a 1980’s Royal Enfield to ride. Shifts are clean yet spongy, but gas the throttle and heads turn, the needle rises and you’re having as much fun as you would on any modern day thumper. Hustling a 200 kilo classic around corners is not really my forte, but it can’t be that bad given that almost every other modern-day motorcycle in India uses the same chassis design. 18-inch low profile rubber up front is a size under the rear tyres, while the front drums are also larger than the rear, little tricks borrowed from the race track that make the Dominator 500SS special. And this particular motorcycle I’d say is even more so, because it has been through a tremendously long and painstaking restoration job that makes it one of the best classic motorcycles I’ve seen to date.

BSA of course could boast of no race derived bits or handling capabilities. They built the A7 as a practical motorcycle for the working class. A reliable motorcycle was what BSA aimed for, but trademarked white steel bearings at the crank kept the A7 far from it. Owners said that BSA’s (Birmingham Small Arms, remember?) guns and their A7 were quite alike – they both went bang. Fortunately the Shooting Star here stopped short of a full bang, with just a small pop. A minor seizure that was attributed to a freshly bored cylinder contributed to my experience on the Shooting Star. And it is not the best classic motorcycle to push around, I can tell you. Then again, which Brit motorcycle is? Naik’s machine had a distinct burble at idle – high lift racing cams doing their job –  and was rather lazy off the blocks. The Shooting Star put out a brisk 26 bhp, while the lever had to be stomped on through the gears. Although quick, the Shooting Star wasn’t as fast as the Dommie and appeared to be more relaxed and more at ease. At least until it popped.

The A7 was BSA’s post-war success story. A flexible setup let BSA experiment with a combination of engines that brought about the A10 and the A65 as well. Crank bearings aside, the A7 was such a popular commuter that the Japanese started a company called Megura, began building these machines and called them the K1. Kawasaki later bought over Megura and the designs to the A7, only this time it was bored out and badged the W3. The Dominator, on the other hand, evolved into the famous Dominator 99 (BSM Nov 2001) – the 650cc racing twin. Anybody with a W3, then?