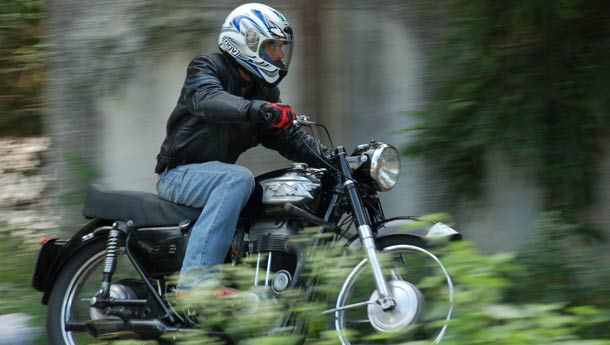 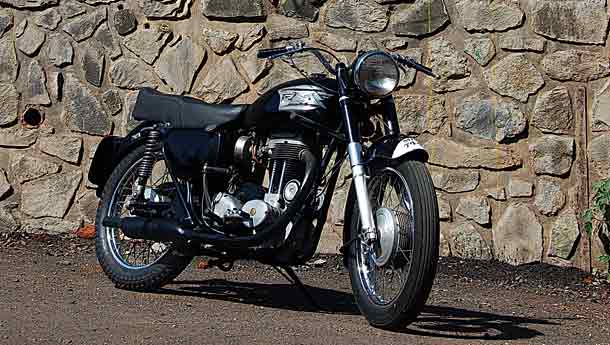 ‘Zat zat zat, I used to pass those Bombay buggers on the highway, their leather jackets flapping and their girlfriends’ bottoms sticking out like that (imitates bottoms) and they could never tell what hit them.’ Yes, that’s the fondest memory Sorab Bathena could animatedly describe for us of his 1964 Matchless G80. ‘I went to Bombay every Saturday to pick up my girlfriend for the weekend. She’s now my wife’, he quickly mumbles under his breath before telling us about his two hour long escapades from Poona to Bombay via Thana city back in the ‘60’s. ‘It was simply beautiful and she never failed on me even once.’ The G80, that is.

Quite understandable I’d think, because this gentleman is a tough nut and besides, this 1964 model of the G80 is one of the last of its line that came fitted with the Scrambler engines from Matchless’ trail bike. You know, those English units that would rev more freely and have a few extra bits inside, make about the same power as the traditional engine yet go a bit faster. And just so that you know, the shorter stroke models that were built from 1964 are quite rare to come across today. If you’ve got one, treasure it.

Bathena bought his G80 back in 1967, after flogging a car that he had just rebuilt. He later found out that the motorcycle was originally parked just a few houses away from him. The bike was hardly ever used and came to him rather er, unused. After that, he’s only ever painted the bike once, in the early ‘80’s. Would you believe it, the paint on the thing is almost as old as me, if not a year older. Wow. Bathena also got the badges re-casted and collected a number of spares for the G80. ‘Dikra, they’re all stored in the trunk under my bed, the big brown one.’ Okay uncle, thank you very much, I’ll drop by while you’re asleep.

The Matchless brand is pretty rare in India, given that the company merged with AJS in the early 1930s and formed the renownedAMC (Associated Motor Company), a huge conglomerate that would manage to buy out Sunbeam, James, Francis-Barnett and even Norton. It was one big mess. So much so that the motorcycles that rolled out of Plumstead were more or less a mix and match of everything. So the AJS Model 33 was the Matchless G15, the Matchless G50 was the AJS 7R, the Matchless G80 was AJS’s Model 18 and somewhere down the line they even threw in a road-going version of the legendary Norton Manx (BSM April 2006). And of this whole glamorous line-up, Norton was the only brand name that was raking in the smackers for AMC.   The G80 and its twin, the AJS Model 18, were called a gentleman’s machine. They were dependable, no nonsense workaday machines, as I was about to find out. ‘Mr. Bathena, now we’ll continue shooting but I’ll get aboard and get a feel of the machine.’ He first gave me a long hard look and then almost split his sides laughing, albeit silently. ‘Sonny, if you start it, you can go wherever you want.’ If only he knew. One heave to decompress, another to decompress, and another, and a few more and she burbled to life. The bulging exhaust piece, with the sideswept exit, looked like something on those Norton’s Dommies. The exhaust was painted black, after a botched-up chrome job, but didn’t lose its character. A twist of the wrist to idle, and the beats were distinct and sounded glorious reverberating off that stone wall you seein the pictures.

Now, the tricky part was getting it in motion. An active clutch and a vintage when you’re trying to impress the owner is a rather awkward situation, you know. I got it moving as gently as I could. And from then on, it was a breeze. This gear box had tall ratios, really tall ratios, so it would have been a surprise to even click it into third on Pune’s narrow by lanes, but the tons of torque would have had you cruising in fourth at about 30 kph. Don’t let this deceive you, because this 500cc, 28-bhp thumper has seen the higher reaches of the 120 mph-marked Smiths odometer at the hands of Bathena. The cog box was just like the unit we’ve got on our Suzuki Zeus – you know, refined and slick and it even had a gear indicator, some 40 odd years ago. Take that Suzuki.

The G80 was sprung softly, but one thing that I was looking out for, but was left disappointed by, was the famous jam-pot suspension. It was a Matchless trademark that made its debut on the first swinging-arm Matchless machines in 1939. But fear not, for I’m sure they’ll be found in that brown treasure chest under the bed. Matchless was the Microsoft of motorcycle suspensions, by the way. They were the inventors of hydraulic telescopic forks when they first showed the world their Teledraulic (it couldn’t get more clichéd) units in 1941. It was a rare innovation for Matchless, given their notoriety for being badge engineers.

Now a visibly excited Mr. Bathena signalled for me to come to a halt – he wanted to have a go at the Matchless. And go he did. After a few runs for the camera, he decided to relive the old days as he cornered his bike around bends while almost scraping pegs. And this while glancing right into the camera, making a complete mockery of gentle riding style. ‘Bugger, this is how you do it. Learn how and the next time you come I’ll let you have a go at my race machines.’ And we hear he’s got a few specials.