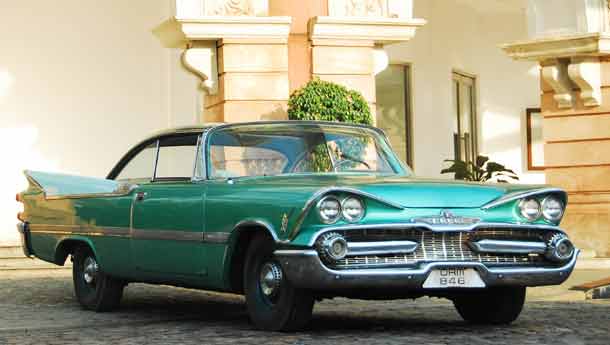 God bless America. God bless lazy, fat America. If not for them, how would I even think of shifting (or hardly shifting) gears by pressing buttons? That too, nice, chunky, chrome buttons. R for Reverse, N for Neutral and D for Drive. Start the car in N, press D, floor the pedal and that’s it. So elegantly simple that even Bush would understand it in a jiffy. However, things can get a little complex for Dubya with the two extra buttons below R, N and D. They say 1 and 2. Not to worry. You need to use those only if you want to get more torque when overtaking or when you are climbing an incline. But why bother even taking that much effort? Just dab that pedal a wee bit and the V8 will do the surging. You, instead, can be completely reclined, using just your left arm to steer just so slightly, while your right can tackle the beef-filled, cheese-enriched King of Burger Kings. Heck, this car doesn’t even have cupholders. Jeez, how did those Yankees manage to drive in those days?

The car in question is the 1959 Dodge Custom Royal hardtop ‘coop’, as the Americans would call it. The last year the car was produced, and possibly the finest of the lot since it started rolling out from 1954. Finest because it received significant facelifts in the five years of its existence to finally look like this – a jet-powered machine with four wheels that needed only two wings and an American driver vicariously thinking of himself as a pilot to take off into the blue yonder using the Interstate as an airstrip. Remember, it was 1959, and the ultimate automotive symbol of that era was the 1959 Cadillac, with fins that would give Lockheed Martin’s F104 Starfighter an inferiority complex. All marques had models with outrageous fins, making dealerships look like mini-airfields, and Dodge sure had this one in its lineup to be counted.

I am muttering a thankful prayer to the ‘forward looking’ Virgil Exner (who should also be given equal credit along with General Motors’ Harley Earl in creating these jet-age automobiles), because have you ever tried reversing a car the length of Wisconsin without the fins serving as guides? Of course, Exner himself would not have been involved completely, as it would have been a team effort to design this car – one team for the front end and one for the back. Seriously. Just look at it.

However, the net effect is startling – if not in late-1950s America, then at least in late-2000s India. Heads turn as the Dodge glides on Mumbai streets, and jaws drop as I draw close to other cars. In this hardtop coupé version, the Custom Royal was at its glamorous best. A four-door sedan and a two-door convertible were also available, but if you wanted to turn up at the neighbourhood steakhouse, then this was the one. Two-tone paintwork, gratuitous use of chrome, jet-age detailing, wraparound windscreen, a glass area borrowed from aircraft styling and of course, good ol’ V8 power.

Displacing 5328cc, this 260 bhp V8 is a middle-of-the-road motor, the top-of-the-line being a 345 bhp 6400cc option. Mated to a three-speed automatic, this is one hell of a relaxed powerplant. You can barely hear it when it’s idling and the power delivery is also as slow as ketchup flowing from a Heinz bottle. This means that even at low revs, the stop-and-go Mumbai traffic could hardly ruffle the Custom Royal. It did not balk at all – all I had to adjust was for the car’s bulk, otherwise it was incredibly easy to drive. And like all big-cube American machines, the Custom Royal’s V8 has enough go in it when you get aggressive with the pedal. It hesitates slightly, the valves shake off the beef-fried grease, the automatic wakes up from its slumber and sends the power to the rear wheels. The Custom Royal suddenly moves, amazing not just the other denizens of the road, but me too, as I am taken aback by its sudden zest. In a straight line, there’s no stopping it – it feels like it’s approaching take-off speeds (I said it feels like, okay, but it could attain 180 kph given enough road), but I was not so confident about the front and rear drums, so I had to abort, er, the take-off.

Handling is something that these cars were never known for, especially when you consider that the only turns you had to take on American roads was when you had to enter the motel/diner/drive-in. Which is why in a straight line and on smooth roads, the torsion-bar independent setup at front and the live axle with semi-elliptic leaf springs offer a peaceful, comfortable ride. So you could chill in the rear seat (armrests and all) and doze off till the next hamburger joint came along, but if there was any spirited driving involved, I assure you there would be no quicker way to remove that half-digested Burger King special than through your mouth. You can’t expect a car that weighs almost as much as a Patton tank to dance like a ballerina, right?

Yet, the Custom Royal was a best-seller in the five years it was around. It was a premium enough sedan for the middle class, with enough flash and appurtenances to make them happy. Dodge offered the car with an immense list of options including power everything, and even introduced swivel seats at the front! Besides, Dodge had a performance reputation, so even if you took a not-so-hot V8 option, you still got that ‘hot’ tag attached to the car. Ironically, this, the 1959 version, did not sell as well in its previous iterations – so Chrysler pulled the plug. But today, this version is considered a classic among collectors. Its exaggerated looks were a reflection of the mood of a powerful nation that was on top of the world. God really blessed America in those days.