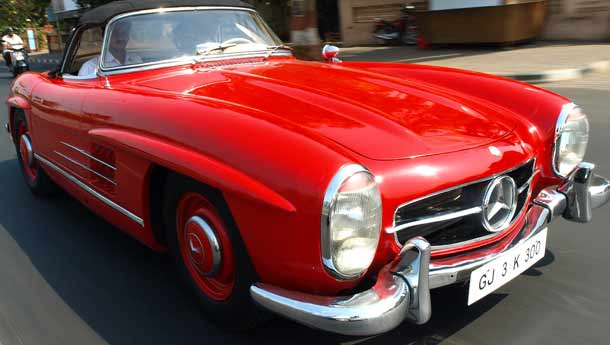 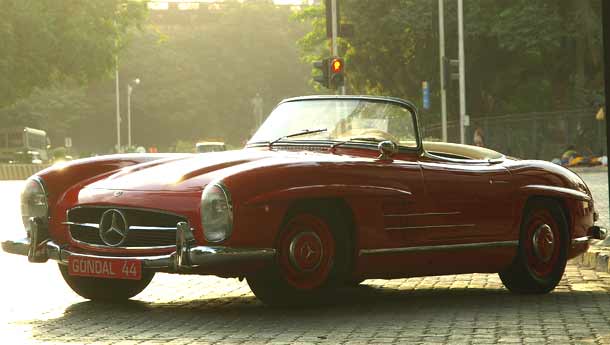 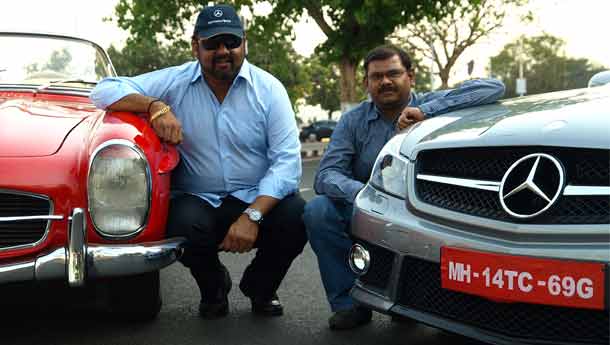 I am a trembling, nervous wreck as I step across that really wide sill and get into the Mercedes-Benz 300 SL. I am usually quite prepared, both mentally and physically, to drive old timers. I am ready for brakes that need application in triplicate affixed with notary seals. I can handle steering wheels that require your arms to be like Schwarznegger’s, and despite that, still telegraph your intentions to the front wheels at the speed of an MTNL landline net connection. My insides have been juggled by harsh ‘suspension’ setups so much that my heart can be felt beating somewhere near my bum. So the nervousness was caused not because I was getting into yet another old car, but because it was THE car.

English hardly comes close to our Indian languages when it comes to expression, but finally, there’s one word that comes close to my feelings: trepidation. Other than the fact that driving on old car on today’s roads can be a handful, there were other factors that were causing the irregular heartbeats. Here’s an extraordinary car that’s valuable, historical and the only one in the country. Now this alone would be reason enough for anyone to get a bout of the loosies. But for me, it went even beyond that; would it be anywhere close to how I thought it would be to drive all these years? Those late nights spent staring at my 1:18 300 SL Gullwing and Roadster Bburagos and vicariously driving them, would they remain the fantasies of a hopelessly besotted grown-up? One to whom the truth could either elevate or devastate? I was about to find out.

Himanshu brings me down to Earth. ‘Srini, it may not be like what you expect, so...’ The aforementioned Himanshu’s ancestors were forward-looking, enlightened rulers who changed the lives of their people for the better. His father actually raced this car in Sholavaram and Barrackpore in the Exotics class in those good old days when motorsport in India simply meant competing by riding or driving fast. The 300 SL has taken pole position in every event it has competed in, and wears its racing scars proudly even today. Himanshu, if you have not guessed, is Himanshu Sinhji Jadeja, the Yuvraj of Gondal, who is as passionate about cars as it gets. He knows his machines, is a terrific driver and worships speed. And he very well knows about my complete submission to the 300 SL. Which is why this word of advice. I don’t know how to thank him for allowing me to drive this greatest piece of automotive history.   Besides, it does not help that I can’t adjust the driver’s seat of the SL and Himanshu is built like, er, his palace. So I am stretched out and the view from the dash, which I have seen in my mind’s eye, is absent – the gorgeous sight of a long hood in front with those simply iconic twin power bumps. The moment of reckoning. With a deep breath I shift into first and let go of the clutch pedal. The roadster is well on its way. Another quick shift to second and then to third and I am set. The engine takes up my tentative shifts, as if it knows that somebody new is driving it. This is not an ordinary engine. As everybody knows, the straight-six was what Mercedes-Benz had in their post-war years around which they could build an invincible racing car, the likes of which the world had never seen. Borrowed from the large, luxurious 300 saloon (in which it produced only 115 hp!), this inline-six was worked upon by the immortals at Stuttgart. But talking about the racing W194 300 SL, which won some radically diverse motorsport events, will take me off on a different, though related tangent.

Back then to W198, the production 300 SL, which was even more powerful than the racer! It was spectacular at launch, it is spectacular now. The birth of the 300 SL was the birth of supercars. Featuring direct fuel injection, the first in a series production car, plus a sports camshaft and a higher compression ratio meant the 2996cc inline-six produced 215 horses at 5800 rpm and a brilliant 28 kgm at 4600 rpm. The incredible specific output apart, the engine revs like, well, a thoroughbred racing engine. I could stay in third and crawl and it wouldn’t mind. Now that is something no legendary supercar is supposed to do, but it does. Though it required a fair amount of left leg pressure on the clutch pedal, it was not a handful, though it could have legitimately been temperamental... the clutch pedal could have been really heavy, the engine could have sputtered in the stop-and-go traffic, the brakes could have gone on strike. No such thing. It was as if the 300 SL did not want to disappoint me. Though I could have forgiven any of its quirks, it was the 300 SL which was forgiving towards me.

Rewarding it was pretty simple; just depress the throttle pedal, that’s all. The engine revs like no other classic I have driven in the past (the Le Mans-winning Jaguar E-Type inline-six comes quite close). Even though it does not have the kind of computer-aided networking that today’s cars boast of, the response is immediate. It just takes off with a roar, like a hound that has been unleashed. This car was meant to go fast. Everything about it spells fast. So it takes as easily to throttle inputs as a fish takes to water. I knew it, I knew it. Those Bburago nights were true after all. It could touch 100 kph in 10 seconds and depending on the rear axle ratio, could attain a top speed of 250 kph. I can’t help but reminding you that this car is half a century old, so imagine the sensation it would have been when it was unleashed on the world. No wonder that Road & Track magazine announced that ‘the sports car of the future has arrived.’   It is in its element now, and for a fifty year old car, offers exemplary amounts of control. No wonder then that it was sold as the car for the enthusiast driver, the car that gave you the driving experience that was ‘previously the preserve of Mercedes works racing drivers.’ I am sure they did not mean that because of the searing heat emanating from the firewall! It was hot in every sense, but such heat has never been so welcome in the middle of summer. Heck, even the pedal position lends itself to some heel-and-toe action, though I didn’t try it. No other classic I have driven feels so one with the driver and the steering offers unprecedented levels of precision (the Porsche 356 comes close, but its engine was somewhere else). The reason is of course that miracle that Rudolf Uhlenhaut and his team pulled off: the space frame construction made of strong but light tubes around which the car was built. That gave rise to the Gullwing, and later the engineering guys managed to make changes in the space frame to allow conventional doors, hence the roadster. Besides, weighing 1,370 kg and that output of 215 hp... work out the figures yourself. Its power-to-weight ratio boggles the mind, and is awe-inspiring even today. Sport and Leicht were words not to be taken lightly; they meant it in those days.

Given the tendency of the Gullwing to break loose at the limits of cornering, the roadster was given a new rear axle, a single-joint swing axle with a lower pivot point and a compensating spring, as opposed to the Gullwing’s double-joint, which made it that much safer. I am sure the Maharaja of Gondal would have appreciated this facet when he was setting the tracks on fire. And the reason he opted for the roadster over the Gullwing is that he wanted an open-topped touring car when not racing. Dual purpose is touted as a big thing today, but cars like these don’t make a song and dance about it.

The remarkable aspect of the 300 SL of course is that form followed function, and yet it turned out to be so gorgeous. I could tell you about the way the engine was canted to be accommodated under that low hood or the protrusions over the wheel arches which were meant to function as ‘splash shields’ and prevent the sides of the vehicles from being damaged. I could tell you about ‘Maxie’ Hoffman, the legendary US importer who gifted a car like this (and many others!) to the world. I could tell you how terribly expensive yet purely desirable it was even then. But all this is now part of automotive lore which I hope is taught in each and every classroom in the world. As I have mentioned in Horn Ok Please, if God were to create a car, it would be this.I have written this article in my mind a million times and at the end, it turned out to be nothing like I thought it would be. But the car that I drove turned out to be exactly what I imagined earlier. I can die a happy man.