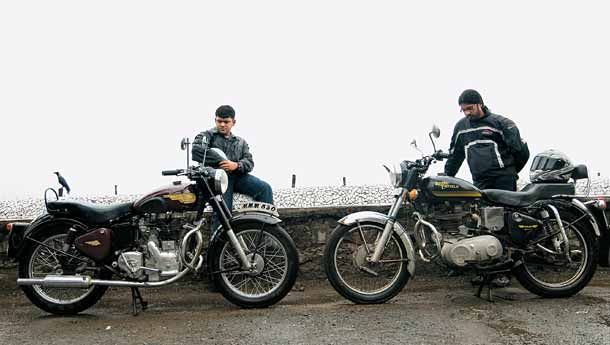 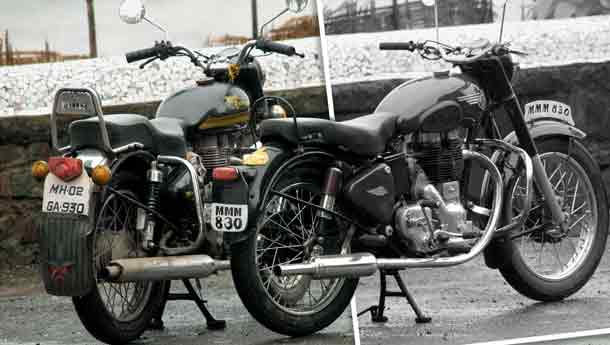 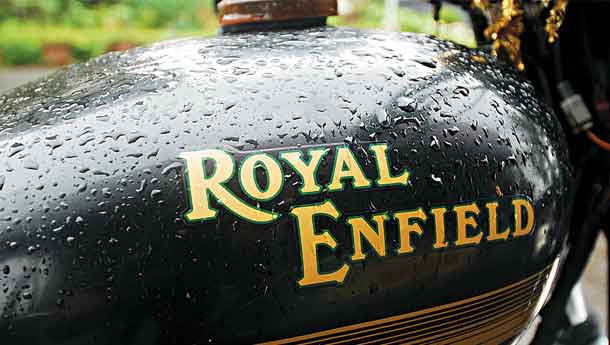 Leathers flapping in the wind. Gloved hands clenched firmly on the handlebar grips. Riding goggles cover a pair of eyes that are eagerly scanning the road ahead. The deep thump resonates through the chromed pea-shooter silencer. The white lines on the road move by, slow enough to be distinguishable from the next but fast enough to keep things from getting boring.

You stop for a breather and sit a few steps away from the motorcycle. But yes, your gaze is still on it. You wonder if your motorcycling predecessors felt the same way you feel right now. Running your hands across the smooth rounded lines brings a smile on your face. You feel a connection to the riders of yore. Yes, a very strong connection indeed.Welcome to the hallowed world of the Royal Enfield Bullet. The world that hasn’t changed much for this big thumper – right from the days of tweed jackets and sola hats to the present, an era when Elvis seems to have made his music millennia ago and where character is lost to efficiency. Change is inevitable, they say. But sometimes, legends just refuse to evolve. They soldier on, oblivious to the progression of times.

It was a rainy morning, dark and gloomy – almost like in the English moors. This was getting as good as it gets. Ryan comes over, undeterred by the drizzle. It’s a black and maroon ‘57 Bullet he’s on. He rides over and comes to a standstill beside me. Droplets of water roll down the tank and get caught up in the polished brass monograms. I walk around the motorcycle, savouring the details.Kartik and Aman look on too. Nobody’s talking even though it’s a joyous moment. Joyous because the 2002 Electra has met it’s forebear for the first time. There is nearly half a century of lineage between them, and here they are, standing handlebar to handlebar.I decide to ride the older Bullet first and put on my old leather bomber jacket. The supple hide gloves are slipped on and like just with any other Brit classic, I retard the timing, decompress and kick away. The bike starts up and settles into a slow, steady idle. I pull in the clutch, and coax the Albion gearbox into engaging the first toothed wheel. I am ready to ride a part of motorcycling history.    Kartik gets on to the Electra. Enfields are in his blood too. The long hair and the beard compliment his enthusiasm towards the old school push-rod engines. He puts on his aerodynamic helmet and snaps in the clasps. His riding jacket is zipped up and the straps of his Kevlar composite gloves are velcroed in place. He’s ready.It’s early and we have the road almost to ourselves. I gun the throttle and the ‘57 picks up speed steadily. And then it begins to misfire. Seems like the magneto timing is retarded. Wait! I had forgotten that I had to advance the ignition timing. I push the handlebar-mounted chrome plated steel lever. Voila! The misfire disappears and the engine gets back in tune once again.Up ahead, the signal turns red. I drop gears and brake. The brake lever has two cables leading out to the drum ahead. Each cable pulls in its individual arm that pushes the brake shoes onto the drum, bringing the bike to a gentle rolling stop. The brakes do their job with extreme leisure – which is pretty disturbing to think about, especially if the occasion arose where I would need to stop quickly. Thankfully, that never happened.

Mumbai’s roads weren’t easy on the old plodder. The ancient suspension didn’t cope too well with the potholes and transferred nearly all the vibrations to my groany rear end. Maybe a sprung seat would help matters.The Smiths meter, turned grey with age, tells me the speed. Its needle moves like a ticking seconds hand of an old pocket watch and the trip meter (with its reset stalk accessible from below the headlight nacelle) rolls on like it has done for more years than I have lived.

It’s now time to swap bikes. We stop beside the road. I look at the buffed aluminium timing cover. It has nearly the same shape as the Electra. But it is more rounded and shows off its origins with an unabashed ‘Royal Enfield’ embossed into it. The dynamo and the magneto are in place, providing juice to the battery and the life-giving spark to the engine. The clutch cover looks different as compared to the Electra. It’s smaller and egg-shaped. That’s because, unlike the Electra and other ‘new’ Bullets, there isn’t any coil in there – just the crank sprocket and the clutch bell sprocket, united with the primary chain. The mudguards have a ridge in the centre, something the larger chromed ones on the Electra don’t have.

Kartik taps my back and jerks me out of my stupor. He’s impatient and wants to ride the ‘57. I get onto the Electra. I wonder whether the bike is lighter or is it just me. I swivel the little plastic decompress tab and instinctively, my finger searches for the advance-retard lever. It’s not there. This kid doesn’t have the CB points of the grand daddy but ticks with a new-age CDI instead and the magneto has made way for the alternator. I smile at myself, and kick the cast iron motor alive. No sir, there isn’t any electric start. No self-respecting old-timer would want his bike to start at the touch of a button. He’s more at home with the anachronous kick lever.   The Electra does have the distinctive thump, although it isn’t as deep as its predecessor’s. The bike I am riding has just been back from a long tour and needs to be serviced and tuned. But that not withstanding, it picks up pace quicker than Ryan’s relic.Before I know it, the speedo shows a healthy 80 kph. The Pricol unit doesn’t have the charisma of the Smiths but seems to sense the speed better. Unlike the Smiths, there isn’t any tripmeter which is quite disappointing.The brakes come on with more urgency than the old half width drums. This is one upgrade I am immensely happy with. In today’s traffic, good braking is a requisite to keep you in one piece.Does the Electra feel as period as the 1957 Bullet? Well, it truly does, except that it’s easier on you. Better brakes and improved reliability make the Electra more forgiving and help it cope with today’s traffic better.

Before we know it, it is already time to hand over the bikes back to their respective loving owners. As they say, all good things come to an end. But seemingly, the Bullet is an exception. The Electra retains all the soul and charisma of the old Bullet. Its engine might meet the current day emission norms and start in a jiffy but at heart, it is still the same as the ‘57.

After all, which other motorcycle can boast of being termed a classic the day it is ridden out of the showroom?