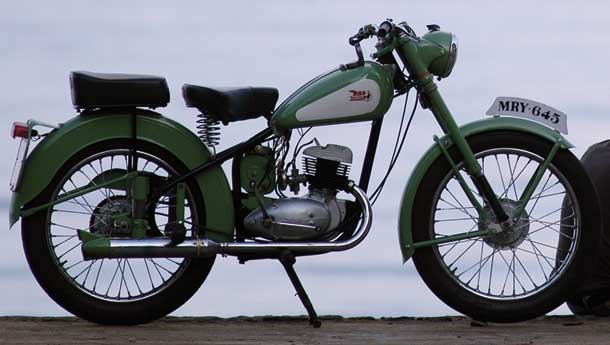 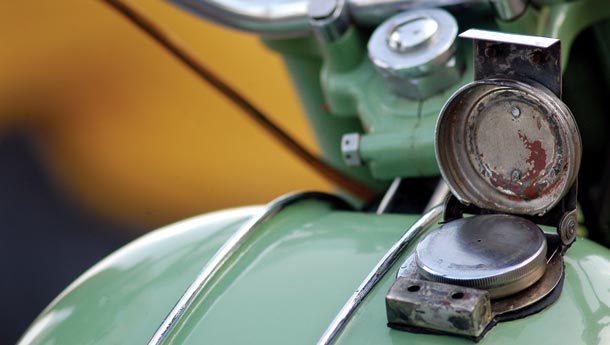 This one was pretty simple actually. Yup, all of it was – right from sourcing the motorcycle to fixing the shoot to the mechanics of the motorcycle itself. And with the owner being as excited as we were about this machine – trust me, that’s a lot of excitement over a motorcycle that’s got as many moving parts as my digital watch – it was great fun.I told you it was simple, didn’t I?

The motorcycle you see in these pages is a 1957 vintage BSA Bantam D3 – BSA’s third iteration of the original rigid frame Bantam. It belongs to Dilip Ghag, a rally veteran and ex-chairman of the two wheeler Indian National Rally Committee. Ghag, who has won a Mumbai-Nashik rally and has participated in a few hill climb events, had an interesting story to tell about his Bantam. The previous owner, Jeram Mistry, was an engineer with Air India and bought the motorcycle in London when he was posted there. He used it to commute to work and brought the Bantam along with him when he returned home in 1962. It was used as his daily commute until a few years back when he decided that age had finally caught up with him.

The Bantam needed younger blood but his grandson, the heir apparent, was too shy of his ‘new’ classic motorcycle. He chose to use his new generation commuter instead, leaving the Bantam to die a slow death. Mistry, a true-blooded Parsi, would have none of this. He immediately ordered that the Bantam be given to Ghag, a long time family friend who had expressed his desire to own it. I did say given, as in gifted. Now how often do you see that happen with a classic motorcycle?

Ghag, who worked on the motorcycle, said his restoration would have been much harder if Mistry hadn’t taken care to see that every bit on the Bantam stayed original. He even fabricated an aviation-grade petrol tank lid that had a clever lock which was actuated with a quarter pin.

For those of you who aren’t too familiar with the Bantam, it’s a model that was made popular by the British working class. It was so popular that they coined a phrase that said Norton won races, coffee-bar cowboys rode Triumphs and dad went to work on a BSA. Conceived in 1948, the Bantam was about as British as Adolf Hitler. After the war, as part of reparations, DKW, a German bike manufacturer and leaders in two-stroke design back then, handed over Herman Weber’s design of the pre-war RT125 to BSA. The first model of the Bantam, called the D1, was built by flipping over the drawings and creating a mirrored DKW RT125 to meet British norms of having the kick start and gear shift on the right hand side of the bike. The Brits, I tell you; they just love to do it the other way.   The engineers at DKW who designed the Bantam’s powerplant were some of the best two-stroke tuners in the world back then. DKW had over 150 engineers working on their racing team, which is what led BSA to build a dedicated racing model of the Bantam until 1955. Bantams exported to Australia and New Zealand were tuned to burn alcohol and were clocked at 120 mph. They even raced Bantams at the Isle of Man TT and continue to have a racing series in the UK. Yes, even I could hardly believe it. It’s a 3-speed 125cc stroker that puts out 4.5 bhp. How on earth do you race this machine? And the 120 mph figure is a blatant lie, I thought. Thank God for the Encyclopaedia of the Motorcycle, Google and my renewed faith.

My experience on the Bantam was much more sober than those I could imagine on the racetracks. A simple motorcycle to look at, this Bantam was in the traditional BSA green, complete with reworked Bantam decals of its year – the BSA star made way for a rooster. The pump-the-kick action gave my right leg a proper morning workout, while the tickler on the carb worked my index finger more than this keyboard. I’ve been spoiled by these modern motorcycles you see, but I was determined to start this thing. A few swings later, she puttered to life. And I mean that with no disrespect.

The Bantam is a small motorcycle. While on the seat, with my feet tucked in, it felt like my legs had grown a bit, if you know what I mean. This motorcycle has upside-down forks and was the last model of the D3 to sport the plunger suspension. Surprisingly, the ride quality didn’t feel as mature as some other classics I’ve ridden. The three-speed box and a jumpy clutch makes the Bantam feel a bit nervous in traffic, although the one sided skimpy brakes helped in panic situations. The closest I’ve ever got to riding a Bantam before is when I rode a Bajaj M80. So you see, nothing much has changed over the past five decades. All told, this machine is just perfect for that Sunday morning putter around town, but you must understand that it’s almost 50 years old.

The Bantam is the motorcycle that had a huge impact on English society back then. It was sold at an introductory price of £60 pounds and enabled almost every working man to afford one. The Bantam was to England what Hero Honda’s CD100 is to India. It even returned a decent 42 kpl. BSA manufactured the Bantam for 23 years through seven models and many different variants (sounds familiar, doesn’t it?).

A 250cc version of the Bantam was ready for production in 1973, but a disgruntled worker went on a rampage after losing his job and destroyed all the jigs and drawings, bringing down the curtain on the Bantam. So which is the greatest British motorcycle of all time? The BSA Gold Star? The Manx Norton? Or the Triumph Bonneville? Um, I believe it was none of the above. It was a little commuter that sold over half a million pieces and kept a company alive. An uncannily familiar story, isn’t it?