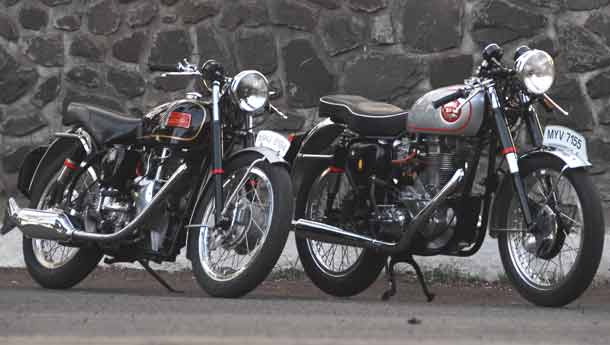 I must apologise to all of you who’ve been following BSM since it’s inception. I know you’ve seen both these machines in these pages before, but I just had to – for my own selfish reasons – ride them and strike them off my Must Ride list. Besides, you didn’t see them both together now, did ya? Anyway, allow me to go on. I promised Bijoy (myself actually) that I’d somehow make this shoot happen and many telephone calls and humble requests and postponed dates later,I finally ended up meeting Reuben Solomon. And how!The man rolled in astride the Venom with his friend Atul on the Goldstar. It was a crisp Pune morning and the cantonment area was deserted. The thundering machines broke the morning silence and before the thump clatter vroom, thump clatter vroom deafened our ears, the duo killed the engines and rolled to a halt. Solomon greeted me with a cleverly crafted and totally unprintable one-liner that is probably his standard greeting to people my age. His Venom and Goldstar said a kind hello with a sparkle in their eye, er chrome.

Both the Goldie and the Venom are in their own leagues, but the reason you find them together in these pages is because both these machines have literally re-written record books in their time. They are both children of the ton-up culture. Goldstars in their various forms were some of the most successful of all road racing machines. Whether it was the scrambles, trials, road racing or the coveted Isle of Man Senior TT cup, the Goldstar has taken more than its fair share of trophies. The Velocette was there at all the events too, but what’s really special for the Venom is that this March, it will be celebrating it’s 47th year of setting the 24-hour speed record for a 500cc motorcycle at 100.05 mph (161.01 kph, average speed). And mind you, the record remains unbeaten today.The BSA Goldstar is a DBD34, the ultimate form of the Goldstar. By 1956, the Goldie had been through the M24, ZB34, BB34 and the CB series, so by now it had been through various states of tune.  At 42 bhp, sporting a double cradle frame, alloy head and block, clip-ons (this one had Maguras), ventilated drum brakes and a humongous Amal GP, it was at the zenith of its existence. It couldn’t get better than this, or so I thought.

Enter the Velocette Venom. This Venom, from 1958, is one of the earlier models. But the Venom, after it was introduced for Velocette’s 1956 line-up, hardly went through any iterations mechanically. The motorcycle is special, it is right before my eyes but it appears to be unreal. And it was built to be way ahead of its time. The most significant change that the Venom ever went through was in 1958, when it was fitted with an exhaust valve made from Nimonic 10 – a superalloy. I feel rather stupid telling you all of this, so to put it into perspective or somewhere close, the Venom is like a Rolls-Royce Silver Shadow and if you chance upon it in any form, take off your lid and bow, British motorcycles never got better than this. The Goldie on the other hand could be likened to the Austin Healey 3000 – it was every boy-racer’s dream.The Velocette, like Solomon himself, is one of the last surviving species in the country. Solomon has owned this Velocette – and the Goldstar – for over 30 years. He tells us that the Venom was used as a motocrosser before he bought it, and the Goldie was a bit better off. He painstakingly put both the motorcycles together after quite a few trips to Blighty to empty his pockets while stocking up on the missing bits. The Goldstar DBD34 is not very rare, but not many can be put beside this beautifully preserved specimen. This Venom is one of three in the country, and one of the other two is also a member of the Solomon family.   Getting Solomon to come for the shoot wasn’t very difficult, getting him to wake up at 6 am was relatively easy as well, but convincing him to let me ride these fine examples of British motorcycling supremacy seemed impossible. He very politely and firmly informed me that nobody outside the Solomon household had ever experienced the joys of riding these machines (Not true. Sac managed a short spin... Reuben forgot or what? - Shumi). Not to worry, I believe that good things come to those who wait, or pester or annoy. So halfway through our photo shoot, Solomon yelled out to me while I was right beside him, saying, ‘Son, you’re a decent chap, you should go for a ride on the Goldstar.’ Decent? ‘The Goldstar’s better than nothing’, I thought, so I quickly kitted up and walked up to the machine. Not many instructions... just start it and ride. So I pull in the decompressor lever, and heave, and heave again and again but the kick starter refused to budge. ‘You need to increase your mutton intake, son,’ said Solomon as he heaved the starter to fire up the massive single in one go.

The Goldstar was a motorcycle that was built for just one purpose – racing, and you know that as soon as your bum is in the saddle and you grab a hold of the clip-ons. Rearset pegs and a short stubby brake pedal add to that feel. The Goldstar runs a high compression engine and the big bangs of the cylinder firing are part of the seat of the pants feel. Solomon does a lot of long distance riding and has made a few subtle changes to make the motorcycle more streetable. A steering damper, he said, was a must along with a 12V system and a base plate at the bottom of the block to reduce the compression for places where high octane fuel is a rarity and an Amal MKII carb makes Goldies less thirsty.

I’m slotted in to first and off I go. The motorcycle is very comfortable and although it’s an elephant to push around, riding it is very easy and it’s unbelievably flickable. It’s no wonder that they still race them on tracks in the Kingdom. I put the Goldie through a series of corners and all with the gearbox firmly in first. The Goldstar has a gearbox with four ratios – lower fourth, fourth, higher fourth and an even higher fourth gear. I realised that getting my bum off the seat and flicking the motorcycle was as easy as doing so on some of the newer motorcycles I’ve ridden. But there’s just one thing you’ve got to keep in mind – the front brakes. They are single leading ventilated drums and the front tyre is a ribbed MRF, so stopping can get a bit tricky. Thankfully, the rear brakes were spot on. The thump emanating from the over-finned 500cc block was distinct at higher revs, but at idle the flywheel would gently tick over, almost allowing you to count the number of revs at idle.

The Venom, on the other hand, has only been adapted to run a 12 volt system. Not much else on the motorcycle has changed. It’s unthinkable to fettle with a perfectly engineered motorcycle. After the Goldstar run, this was my moment of truth. Will he? Won’t he?He did. Solomon fired up the Venom without much hesitation and held the throttle a little above idle, waiting for me to take the controls. The seat is more standard and while the Venom doesn’t have clip-ons, the bars put you into a racing crouch. The gearbox is not as close-ratioed as the Goldie, but slotting into first is a black art which I somehow managed to master. The Gods were on my side. Velocette’s trademark fishtail silencer isn’t there only to make the motorcycle look good but to deafen the neighbourhood the first time you go by. After that, Velocette engineers believed you and your Venom could live there happily ever after and never hear a complaint.As the engine revs build up and I let the clutch out, the motorcycle surges ahead. Power delivery is very linear and the engine revs out like it’s a new generation Japanese twin and is more streetable than other high strung race machines. Velocette were know to build quality motorcycles and it is so evident in the Venom, there’s not a fault you can find in it except one. I had to go squint to read the tachometer, but blame that on my perfect eyesight.

These two machines were the Kingdom’s offerings to the Gods of speed and it shows. One of them was the ultimate racing tool, the other a marvel of engineering that was way ahead of its time. Both made it to BSM’s Summer of Speed and both were struck off my list of ‘Must Rides.’ Which is great, but what I’m really concerned about is that my mind’s gone a bit blank. What’ll I have to do to top this?