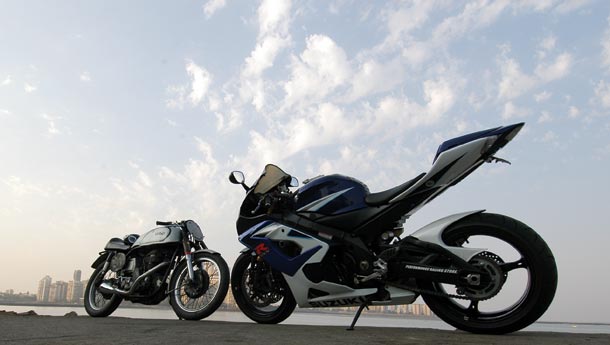 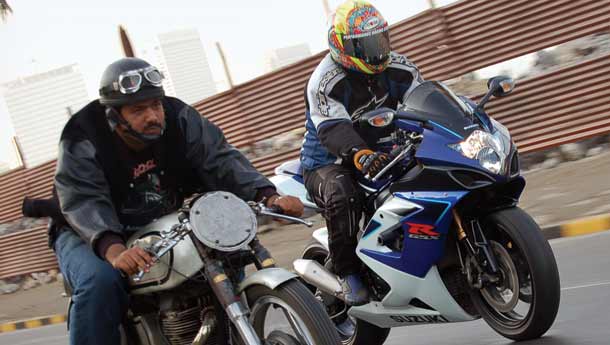 It’s 6 am and the stars are still out. No, not us, the ones above. The sky is a dull grey canvas as we rendezvous by the seaside. We line up  the  bike and Pablo begins clicking as the first of the sun’s rays breaks through the clouds. It still hasn’t sunk in – the motorcycle I’m looking at is the greatest to have ever come out of the Kingdom. The very pinnacle, straight from the spiritual home of motorcycling. I’m overwhelmed; I can’t help but stare shamelessly, lustfully at it. Suddenly, in the background, a soft hum explodes into a howling basso. A bright light leaps into sight and screams towards us. This is unbelievable, its almost surreal and we’ve finally managed to do it. Yes dear reader, that’s the Manx Norton I’ve been staring at and the howl is coming from a 2006 Suzuki GSX-R1000K6. And no, we didn’t board an airplane to get this done.

You’re probably wondering why the Gixxer is here, and not a more chronologically appropriate Triumph or a Moto Guzzi racer. That’s because the Manx is without a doubt the most famous and most successful production racing motorcycle ever. And the Gixxer seems to be chewing away at that very record. And also because we haven’t come across a Triumph or a Guzzi of that calibre yet.

The Manx, notorious for dominating the Isle of Man TT, won the 350 and 500cc categories from 1951 to 1954. And this itself  was a feat considering it was up against bigger, faster British twins and even Italian fours. The Gixxer, in contrast, etched itself all over the time sheets at the Isle in the production class races from 2002 to 2005, sometimes occupying the top five, even top six positions! These machines are two of the greatest legends as sporting motorcycles go on the kinky island streets.

The K6 is the sixth iteration of Suzuki’s attempts at world dominance. Okay,  I’ll simplify that. By 2001, Suzuki had grasped the threat to their stellar GSX-R750 posed by the  increasingly faster litre-class superbikes. The Yamaha R1, the Kawasaki ZX-9R and the Honda Fireblade were out-gunning the 750 on all fronts, helped in no small measure by their displacement advantage. Suzuki’s response was a 160 bhp 998cc engine in an all-new chassis with the GSX-R1000 badge – code name K1. The motorcycle was built specifically with outrageous performance in mind. The fifties Manx on the other hand was born in Norton’s cramped Bracebridge factory using an overhead cam engine that was designed by Arthur Caroll in 1930. As for the name, it came from its exploits on the Isle.

Titanium nitride coated forks and fully-adjustable suspension starred on the K1. Suzuki used bleeding edge technology to make the Gixxer go faster. And so did Norton at the time. They showed off their trademark Roadholder forks and plunger suspension on the Manx. Hydraulic shocks back then was like having an Indian motorcycle with inverted shocks today.

Suzuki constantly worked with factory racers to make the GSXR lighter, faster and friendlier. Better ergonomics, bigger bores, lighter motors, fine-tuned aerodynamics... five years of racing experience later, the K1 evolved into the superfast, subliminal, sexy-looking K6. A motorcycle well-nigh unbeatable on road and track. Norton too had their development program spot on. The Manx had the famous Featherbed frame. Developed by the brothers Rex and Chromie McCandless who raced Nortons, it was a revolutionary cradle-like chassis that gave the bike unmatched handling. The McCandless brothers had no million dollar R&D facility, and yet their 57-year-old Featherbed design was so superior, (read this out loud) it is the world’s most copied motorcycle chassis format and is still used in motorcycles today.

Enough about the past now, let’s focus on what we have right here. The Manx is India’s only example of the best British motorcycle ever made. It now belongs to Atul Harish Solanki, a vintage car and bike collector and dealer who also restores them. The Manx was pristinely parked in a garage for the 30-odd years before it came to Solanki. I know the words racing machine and garage can only appear in a sentence separated by ‘pit.’ But let me assure you the bike has been through its fair share of racing at Sholavaram and the Juhu Aerodrome strip in Mumbai. The dings on the tank, scraped bar ends, contorted footpegs and cracked mudguards aren’t there because the Manx was resting at the bottom of a pile of vintage bikes, they’re the battle scars of a racing veteran.

The gorgeous Gixxer turned up thanks to our friend Vivek Jaising’s (remember him from the Fireblade-R1 shoot last March?) penchant for stonking fast motorcycles. The K6 is brand new, (all right Shumi, it’s 1500 km old) but Vivek hardly ever lets her lie idle. He’s practically lived on the Gixxer through the run-in and now you should see him when he’s tucked into the screen or pulling a wheelie at 150 (all the usual disclaimers and warnings apply). The K6, in the traditional Gixxer blue and white, has beautifully streamlined body work; it’s almost like it spent the last winter in a wind tunnel. A vertical headlamp, flared nostrils, er, ram air ducts, a big tapering tank and a wicked looking tail piece with LED lamps is more or less what the Gixxer looks like. Oh, and it’s not even as long as the Manx. I’m serious. As serious as the bike is.   Okay, so I’ve got a ‘50s street racer up against a current generation demon. A 348cc DOHC (yes, it  is double over head cam) single alongside a 998cc DOHC four, an Amal GP carb beside an electronic fuel injection, a Lucas racing magneto trying to outspark Suzuki’s digital ignition, an exposed dry multi-plate clutch battling a slipper clutch, aluminium rims trying to out-handle alloys, Roadholder forks trying to outdamp fully adjustable inverted telescopic forks and old British Firestones trying to outgrip the modern day gooey. The list goes on and I could fill this page but I’m going to stop debating which is better or faster or... will somebody help me with these riding pants?

On the Gixxer, you just sink into the seat, but it sets you into a racing crouch when you grab the clip-ons. I’d be lying if I told you I wasn’t nervous. Clutch in, I depress the little red button and hear the four portals to hell growl to life. I am so scared I’m not sure if I should engage first now or just get off the bike and say, ‘Awesome motorcycle, thank you very much.’

I gather my wits and slowly let the clutch out. The throttle is still closed –  I’m afraid she’ll pop a wheelie on me. Rolling steadily now, I open the throttle carefully and ride away. My ears are tuned to the sound of the exhaust note – they have to be, the motorcycle has a 104 decibel race can. Holy crap! That’s four decibels louder than a jet at take-off. I’m not really about to try anything extraordinary (read stupid), so I take it easy and try to get used to the machine. I feel the weight of my torso in my already protesting palms. It’s like the bike is making me do an involuntary, continuous push-up. I slowly filter through traffic making sure that no sudden, catastrophic inputs come from me. Annoyed with the traffic, I come to an exasperated halt and wait for it to clear. A good opportunity to blip the throttle and listen to the orchestra-like acoustics of this perfectly engineered piece of machinery.

The road clears up and I’m good to go. Into second, with the throttle not even close to half open, I can see the digital readout score 80..90..100 as my head is thrown back violently. Maybe if I’d remembered to tuck into the fairing...

That’s it, I can’t handle anything faster during rush hour, so I’m onto the responsive brakes and back to morning traffic speeds. There’s only two words to describe steering this machine – weight transfer, sit up in the saddle and the only place you’re going is straight ahead. The 100 kph run was freaky enough to have me keep the revs well outside the powerband for the rest of the ride. I’m back, intact, satisfied, scared yet smiling from ear to ear. That was awesome (You don’t say... Shumi). No, it really was. I just can’t put my experience into words, but just so you know, I’d sell all my earthly possessions (and myself) to own that K6 right now.

I may have been in over my head with that statement there. And then again, I might even rethink that after I’m done riding the Manx, right? The Manx spells racing right from the time you swing your leg over – which is the easy part. The thought of actually riding her was like me playing marbles with the Almighty. On the Manx, you have to push to start. That is, Nandu pushes, I grab second gear, and when I feel merciful, I let the clutch out. The motorcycle was built for the track and never came with a kick start (or stand). Nandu’s reward is a face full of superlative British racing exhaust and a thump that’d shake the ground at fifty paces.

I wring the quick-throttle. There isn’t any surge of acceleration. She isn’t a crotch rocket, you know; she picks up speed gradually by today’s superbike standards. Gear shifts are smooth but not as slick as the Gixxer, but I’m not too bothered. The bike stutters about at higher revs and I can’t really enjoy the ride. Sheesh, forgot to advance the timing. I fiddle with the timing lever and the Manx responds happily. I can rev her out and pretend I’m racing from Governor’s Bridge up to Bray Hill. But I’d rather not toy around too much with a sizeable piece of history. Besides, the ventilated drum brakes aren’t even close to being as efficient as the 348cc motor.

A fast Manx is a loud Manx. The Norton had the famous megaphonic exhaust pipe that made the deaf hear and the mute break their silence in protest. But I’m pretty sure it was just designed to keep animals off the street circuit. So what does it feel like? It was like taking motorcycling’s
patron saint’s bike out for a spin. Old, steady, agile, and fast. Divine. I’ll have to gracefully take my foot out of my mouth and keep all my belongings to myself because this motorcycle is priceless.

All right, so here’s where I make up your mind. The Gixxer looks like Kate Moss, is as fast as Paris Hilton and has a rear that makes JLo’s insurance plan look like a big (ahem) blunder. The Manx on the other hand is like Madonna – mature yet sexy, mystical yet desirable, and it still has the energy to put up a show for the next generation.

My choice? Well, I lust after the Gixxer, but I long for the Manx. The Gixxer will get beat next year by the K7. But the legend of the Manx has been around since the 1950s and it hasn’t been eclipsed. It probably never will. Besides, it will lift me closer to touching greats like Geoff Duke, Ray Amm, Phil Read, John Surtees and Mike Hailwood, all of whom rode the Manx on an island. And won.

Riding fast aside, Vivek can help you source riding gear. Visit  performanceracingstore.com,  his site , for more info.If you need to know anything about vintage machines speak to Atul Solanki on 09820147144 or atulsolanki1975@yahoo.com