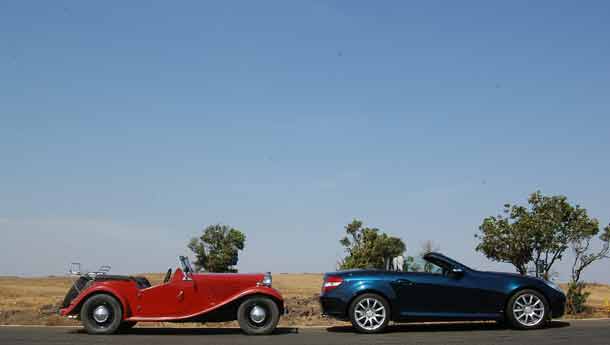 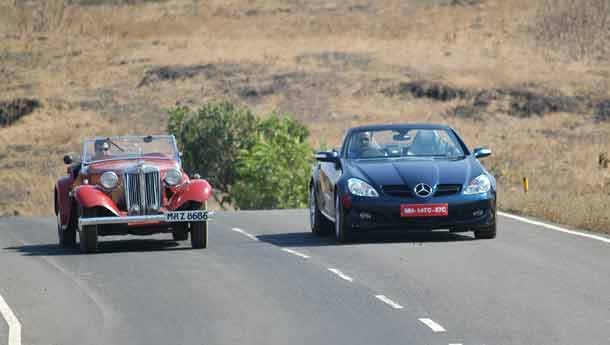 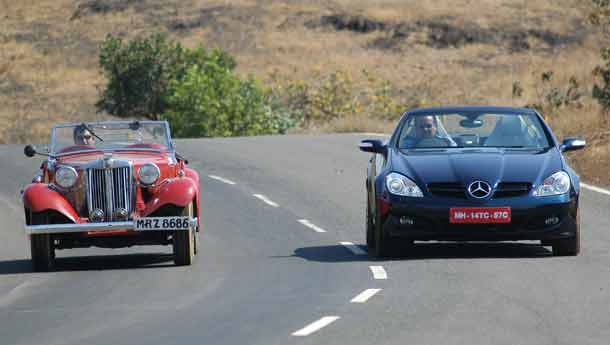 It’s early and the adolescent sun is just about making its way up through the mountains. Yet the morning dew has long disappeared and the sultry air blowing between my fingers and around my neck is telling me that the inescapable heat of high summer has arrived, while smoke escaping from chimneys in the distant landscape completes the picture postcard. We are headed out of town, and riding in Amir Ali Jetha’s 1951 MG TD, I am experiencing my very first encounter with a car from this era. It’s an astonishing date with the past, like having dinner with Marilyn Monroe. The TD’s twin carburetted four-cylinder engine is distilling 54 horses under the hood and dispensing them through the rear wheels. But the MG’s soundtrack is being drowned by the pupil-widening exhaust of the Mercedes-Benz SLK. It seems that the boxes in the ‘makings of a memorable day’ checklist had all been crossed.

But the point today, apart from testing the SLK, is not to compare the two, but to see how different or similar open top motoring has become over the past fifty years.The Ford Model T may have put America on wheels, but MG put them behind the wheel. It’s easy to see why. Unlike the softly sprung, numb-steering American barges, the MG (especially the earlier generation TC) offered at least the illusion of speed and handling. Add to that those stripped-for-action looks defined by the flowing front fenders, cut-down doors and a hood that has more feet than engine. Throw in an ol’chap wearing a tweed cap and a coat with suede elbow patches driving on a twisting two-lane road in an elbows-out driving style, and you would have a poster child for classic fifties British motoring.

But if ever there was a poster child for extreme makeover, it’s the new SLK. Once the softest, smoothest, and most conservative two-seater, Mercedes has given it fast, contemporary lines grafted from the intoxicating SLR, making it the most aggressive car in their stable this side of the supercar. The success lies in the fact that it makes the Boxster and the Z4 look dull.

The long bonnet helps it maintain the roadster’s proportions while the sharply upswept waistline and the tiny glass house convey a good sense of athleticism. Top up or down, the visual appeal remains as a small grand touring roadster rather than a hardcore sports car, something that the old SLK also did beautifully. If looks mean anything – which in this sort of car can mean everything – the SLK is a winner before it’s even turned a wheel.   It’s not just that. This SLK now gets a V6 and a seven-speed automatic transmission that hauls the roadster along with real authority. It’s also the first time that Mercedes-Benz is using variable intake and exhaust camshaft adjustment in a V6 engine.

With photography completed and out of the way, the high noon sun beats down on us as we head up to a series of shimmering bends along the mountains. The dry day is curling around the windscreens and into the TD’s cabin. The heat is so intense I think the lacquer of the wooden steering wheel will melt and I will be stuck to it for life. But frankly I don’t mind, because on a winding road the MG is in its element.

It’s not an easy car to drive, and to get the best from it, you have to concentrate. You sit low, so low you could put out your hand and file your fingernails on the tarmac, while the cut-out doors further add to that sense of excitement. Sitting with the large upright steering wheel staring into your face feels like flying a World War I biplane. Or at least I imagined it to be that way. Fifteen minutes in this car makes you wonder if God made mountains just so we could go up and down them in cars with no roofs.

At this point I would have loved to tell you that the SLK is the road-going equivalent of an F-16. But it isn’t. It’s more business jet than a commercial airliner, and though some amount of hip-swivelling is required to get in, the ambience is high-tech and rather inviting. There is no wood, which is nice to see in a Mercedes. There is a last-forever solidness in every part you touch and that two-tone theme is stunning. The SLK retains the deep dish look to its dials but the star of the SLK is still the roof and the act is best performed in front of a captive audience. Pull back a button, the roof hinges in half, the rear window does a back flip and folds into the boot, which then closes to hide the evidence. 22 seconds of street theatre later, you’ve got yourself a gorgeous convertible from a gorgeous coupé. You can never tire of watching the roof do its thing and this alone is worth the price tag. In comparison, the MG’s top is a bit ironic. It’s a quite a process to put the pup tent hood up and is best done when the sun is shining and you have extra time on your hands. Exactly when it’s not needed. So let’s just keep the tops down for now, shall we?

The first time you floor the throttle on the 350, what strikes you is not so much how quick this car is, but how good it sounds. It emits a cultured snarl even while cruising around and flooring the throttle gives way to an angry high-pitched bark. Precisely three minutes later you are desperately searching for a signboard that reads ‘Tunnel Ahead’.Keep driving it, though, and a different story emerges. Acceleration feels brisk rather than explosive, and keeping the throttle pinned to the carpet will bring up 100 kph on the speedo 8.3 secs later. Compared to the SLK 200, the 350 offers more than an extra 100 horse power and the smooth warblings of a V6. While the 200 did absolutely nothing to risk offence, the 350 feels like it was the engine that was meant for this chassis. The 3500cc 268 bhp engine has a wide power band and a muscular mid-range – 80 to 120 kph takes just over 5 seconds while 100 to 140 comes up in seven seconds.

The upgrade also means you can now smile at wiggly shaped road signs. Smile but not grin. The SLK-chassis rides on a three-link front coil and five-link rear coil spring suspension that keeps it stable and planted in corners. Turn-in is crisp, and though you can carry huge amounts of speed through corners, it lacks the nimbleness of a small, light car; given Merc’s obsession with safety it really doesn’t come as a surprise. And nimbleness is something that the MG had by the truckloads. The SLK feels bolted and yet it will reward those who drive it hard. Keep it within limits though and it won’t ask any unnerving question which your driving style can’t answer. In the MG, you have to keep a handful of opposite lock ready because it will snap the minute you put a foot wrong. The MG tempts you to use all the revs and plenty of gear changes; it isn’t fast but it feels fast. It’s that seat of the pants feel which lets you be a part of the landscape. In the SLK, all you want to do is use that loud pedal and get your dope on some German soundtrack.   The SLK feels ponderous and it is not just the weight that gives it flabby handling. Amazingly, despite the low profile tyres and the suspension’s composure in bends, the SLK’s ride quality is excellent. Even the largest bumps merely elicit a distant thump and the car’s ride stays on the comfortable side of firm. The car rides well, unlike the earlier SLK which was twitchy, soaking up the bumps without pitching or jiggling and yet it stays flat through corners with a taut, responsive feel, and the heavy steering wheel give it sparkle free dynamics. Then again, asking an SLK to go slithering round corners like a go-kart is asking it to behave unlike a Mercedes.

Those looking for out-and-out performance in the current SLK lineup are going to want the 350 and it even seems to have an unanswerable argument. Till you hear the price. The car that we had on test came with a lot of equipment apart from the alphabet soup of electronic lifesavers like ESP with EBD and brake assist, ABS, and so on, for which you will have to dish out a rather exorbitant 70 lakh rupees. For that much money, you could get the 200 and a C-class with the spare cash. But the best part about the SLK 350’s price tag is that it’s just shy of a 911’s.

But then it wouldn’t be a convertible. That’s the thing with the joy of joys that is open top motoring. In a hardtop like a 911, all you want to do is drive till you have exhausted your resources from every last fibre in your body. But when you don’t have a roof, you are among the sights, the sounds and the smells and that’s when unknown landscapes become alluring destinations. Cars without roofs do that to you and then it doesn’t matter if it’s a 2005 hardtop or a 1951 ragtop. They also help you understand why dogs love to put their heads out of car windows.

With most of the driving done for the day, we are heading back to base and I floor the SLK hard, relishing the cry of the engine for the final time. But for all the SLK’s baritone propelled motion, the MG is hanging on hard behind, almost.

If the SLK becomes a collectible it will become one for the way it looks, not because of the way it drives. Don’t get me wrong here, the SLK is a wonderful car, almost all the roadster you will ever need, yet somehow in being and having less the MG is the more intimate car to drive.

As the sun turns to haze and the smoke trails from chimneys almost disappear and the dark sky looms large it is time to put the roof up and head home. Lights out.

I drooled when I saw the original SLK and went ga-ga over it in a long-winded story after I drove it for the first time way back in 1997. The SLK was a refreshing change to the world of Mercedes-Benzes and when it came to the scene – along with the A-Class – it changed the way the world looked at Mercedes-Benzes. I can easily replay that first test drive in the bright yellow SLK on the winding B-roads in and around Heidelberg. Eight years is a long time and lot of things have changed. To begin with, the old SLK  played second fiddle to such masterpieces as the  Boxster and  the ‘girls car’ is now dead. The problem is that the old Boxster has been rolled back to a museum in Zuffenhausen and a new one has hit the road. I have driven the new  Boxster S (BSM, April, 2005)  so allow me a quick comparison.

The Boxster is still the better car, but the SLK has caught up. The Boxster felt nimble, light and sharp while the SLK  felt a tad too heavy and needed to be woken up for action. You take ten seconds to be comfortable in the Porsche and you take ten minutes in the Mercedes. Okay, make it five minutes. The SLK sounds great all the time while the Boxster needs revs to make music. The Boxster driven by a good driver can tail a 911 driven by a mere mortal. No such chance with the SLK, though I am sure the SLK 55 AMG can cure most of the potency issues. But wait a minute, isn’t this the wrong SLK for Indian roads? Bring on the tri-turbo diesel version and maybe the ‘average’ conscious Indian buyers will flock to the dealerships. Just maybe.  -Bijoy