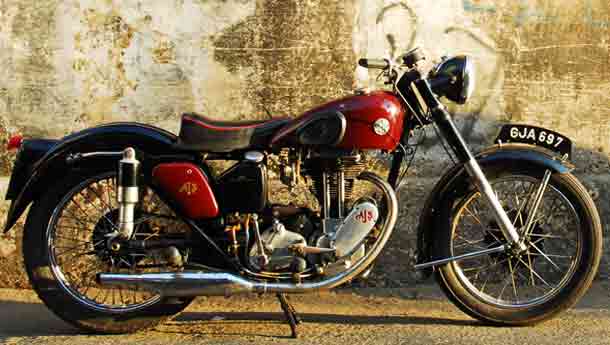 History Lesson:
Joe Stevens built his first internal combustion motor in 1897 and started supplying engines to other manufacturers in 1900. He used his father’s factory to build mobikes and by 1905 he built his first – a V-twin JAP-engined motorcycle with leading link forks and rear swinging arm suspension.

Albert John Stevens registered AJ Stevens Co in 1909. The company was a family business with his brothers Harry, the chief engineer, George, the chief salesman and Joe Junior, the production engineer. AJ himself was in-charge of design. They rolled out their first bike in 1911 and entered it in the TT. In the next four years, AJS would go on to develop motorcycles at an astounding pace.

Post-war AJS would continue and in 1928 their chain-driven OHC motors brought home the loot at the TT. By 1930, AJS also had a 496cc shaft-driven transverse V-twin in the S3. But the tidal wave of Japanese machines mercilessly swept AJS and their 117 world race records into the AMC conglomerate.

People say ‘If you’ve ridden one British motorcycle, you’ve ridden them all.’ But not many people have had the opportunity to ride the  AJS Model 16 that you see here. It’s rather different from any of the other motorcycles that came out of AMC’s Plumstead factory. You do know that AJS motorcycles were manufactured by AMC after 1935, right? And this notion isn’t just from the top of my head. I’ll take you through it.

All of you must have seen a tube well, right?  If not used one just for the heck of it? Firing up this AJS is just like pushing the lever down on the pump. It’s a very mechanical process – you can feel the gears in the box churn as the crank starts turning around, just like the water flowing through the vanes in the pump. And it isn’t half as hard – you could even start the 16 (don’t mind if I call it that) with your hand if you wanted. The motorcycle fires up to a very muted thump as the flywheel ticks over each time. The long stroke ensures that it doesn’t rev faster than your grandpa’s old clock, so you can imagine what the idle speeds are. Not that I’m complaining, because you can hear every little cog and cam in the motorcycle do its job. Most would call it mechanical and noisy and honestly, it is. But I thought it was truly amazing and probably one of the finest sounds out of a British single, because it gave me a mental picture of exactly what each of those components in the engine were doing. It was a working model of an engine cross-section.

The engine on this AJS model 16 bore quite a striking resemblance to the Matchless G80 (BSM, Nov 2006) that I rode a few months back. It would, because Matchless, AJS, and even Norton couldn’t survive the Japanese wave and all of them, at some point or the other, sold out to AMC to keep their brands alive. This meant that AMC had one of the most spectacular line-ups ever – the amazing AJS 7R, the one-off supercharged, liquid cooled V4 (that clocked 160 kph at the Ulster GP), the TT dominating Matchless G45 and even the Manx Norton all under one roof.

It’s rather unfortunate that not many know of AJS’ rich racing history. Allow me to elaborate. AJS have showed that it was in their blood right since the inception of their first motorcycle, a 1911 two-speed 292cc side-valve. It placed 15th in the Junior TT with AJ Stevens on board. By 1914, they had a 350cc motor in place and took the first, second, third, fourth and sixth places. 1920, ‘21 and ‘22 saw them win the Junior TT, while their only senior TT title came in 1921 where Howard Davies rode a 350cc AJS like a man possessed to beat a couple of 500cc Indians and a Triumph by a narrow margin. When AMC took over, they cashed in on the AJS racing history (and more importantly the technology) and stuck with the reliable pre-war engines to build some rather reliable machines.

You would’ve noticed the suffix S at the end of the name. That may have fooled you into thinking it’s a Sports model, but it isn’t. S stands for spring, which means that it isn’t a rigid frame. By 1951, the 16 inherited the famous Jampots, which is what you see here. Good ride? I’m not sure. Better than a rigid? Most definitely. As I was saying earlier, another reason why this single was different from the others is that it had a close ratio synchronous gearbox. Or at least it seemed to be synchronous. At idle, you can just slip the lever into first without any trouble, but once you’re in motion you have to keep your ears pricked up so that you can match revs before engaging the next cog. The close ratio box puts you in fourth by 40 kph and you can stay there all day. And honestly, I enjoyed it like that because I can never get myself to trust those half-a-century old dead(ly) single-sided drums. With the long stroke generating enough torque to (theoretically) tow Pablo and the tracking car along, this was one of the most relaxed and pleasant rides in a while.

The Model 16S wasn’t one of the greatest machines to come out of Wolverhampton or Plumstead. It was a poor-man’s machine that was put together to bring AJS back from relegation after  WWII and was produced in large numbers. Yet for us in India, it is quite a rare find. So I’ll just be content with the silent thump of the 16 until I find another AJS and hope it’s a gorgeous 7R in deep black with gold pinstriping that will come rumbling through in these pages.