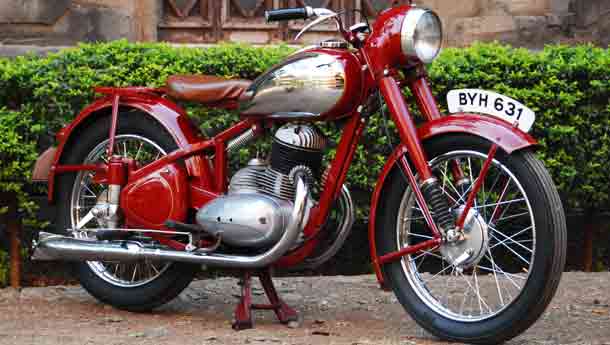 Jawa two-strokers have quite a legacy. I've heard numerous tales of these smoke machines from the eastern block doing rounds of the Himalayas back when the Himalayas were sprouting roads. Some reports suggest that a couple of Jawas managed to reach there as the engineers of the 201st Engineer Regiment of the  Madras Sappers paved the way to Khardung La.... on kerosene. This shouldn't come as a surprise, given that Jawas were built at a time when cities were nothing more than stacks of rubble and fuel was rationed. Frantisek Janecek decided to build motorcycles to overcome all this.  Janecek is the JA in Jawa and he's the brilliant mind behind these magnificent machines. If fact, by the time he was 31 he was credited with about 60 patents, the most famous being the hand grenade. With Janecek's inventions you were certain to have a blast, so to speak.

The WA in Jawa came from Wanderer – a German motorcycle manufacturer – that Janecek chose to source engines from over a twin from Puch of Austria and a two-stroke from Schliha, another German manufacturer. The first Jawa had a 500cc engine and was already ahead of its time. It had front forks made from pressed steel and an advanced lubricating system for the cylinder head, connecting rods and bearings. By the 1930s, Wanderer shut down and Janecek was given a choice to follow convention and other manufacturers and stick to a 500cc engine or break tradition and come up with something new. He roped in British racing enthusiast GW Patchette, who tuned a 175cc Villiers two-stroke around a lightweight chassis to form a motorcycle that would cost half as much as others and have twice the following in the then Czechoslovakia. It was the birth of a motorcycle that would eventually become the Perak.

Jawa's Czech operations ground to a halt after the German occupation. The factory was used to build components for German warplanes and the workers made every effort to throw a spanner, literally, into the Germans' production plans so they could get on with building motorcycles. In 1940 Janecek, the clever chap, started work on a new motorcycle for the Führer's men - or at least led them to believe he was doing so. He wanted to build a motorcycle that was reliable, simple, comfortable and cheap, a motorcycle for the masses that would be the BSA Bantam of Czechoslovakia. But the poor man died while he was doing so, leaving his son Karel to fulfil his dreams. The first  Perak model, a 249cc two-stroke single draped in military green was tested in the late thirties or early forties under the watchful eyes of the Germans. By doing this, Jawa had already gone one up on the competition by clearing the way for post-war production of the Perak.

Which brings us to the flaming red machine on these pages. This little beauty of 1950s vintage is only one of Mandar Phadke's 30 Czech mates that are parked in his garage, all of them Jawas. Mandar's Jawa is one of the few Peraks that have been carefully pampered, so much so that the motorcycle still has every single bit it did when it rolled down the assembly line in 1950 -  everything except the tyres. A glance at the Perak and you'll understand what Janecek intended. The motorcycle was built keeping simplicity in mind, yet it had the curves that would be infused into later models in the Jawa lineup. The Perak was also one of the earlier motorcycles to sport a nascelle headlamp, plunger shocks, a covered carburettor, an instrument cluster with an ammeter and of course the springer seat – Perak meant springer in Czech – at such an early point in time. And it even won an award at the Paris Motor Salon in 1946.

The Peraks had a four-speed gearbox, part of a unitary constructed engine that produced 9 bhp, and had the famous kick-starter that doubled up as the gear shifter. Cool, e?h? I still remember being fascinated by this feature as a kid whenever my dad's friend pulled up on his Yezdi Roadking, although the Perak was distinctly better looking and a hell of a lot easier to start than his run down Roadking. There were no half kicks or pumping the kick starter. Just a couple of light kicks and the little Perak sputtered to life. You could even start the motor with your hand. Smoke billowing out of the tiny fishtail silencers, the little motor sounded exactly like any other of its descendants, and I was ready to hop aboard my first Jawa.

From the time you get into the saddle, the little Jawa feels comfortable. The springer seat along with the plungers in the rear and the telescopic front forks  dampened every ripple on the road and then some. I actually began to enjoy bouncing around in the sprung seat. The gear box doesn't exactly slot into first, (rather, falls into it) but once you have the gear engaged and the clutch out, you leave all your inhibitions of riding a vintage machine and a long blue trail of smoke behind. The throttle response is rather disconnected, but the Perak needs no convincing to pick up speed. Mandar assured me that the little engine is capable at cruising at 90 kph, but I was content just tottering about the place enjoying the bike.  Besides, I've never been able to entirely trust  drum brakes that are 57 years old, and I'd like to visit Mr Phadke again to sample a few more of his Bohemian friends.