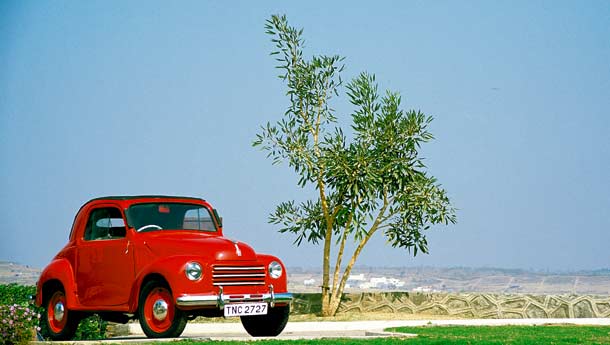 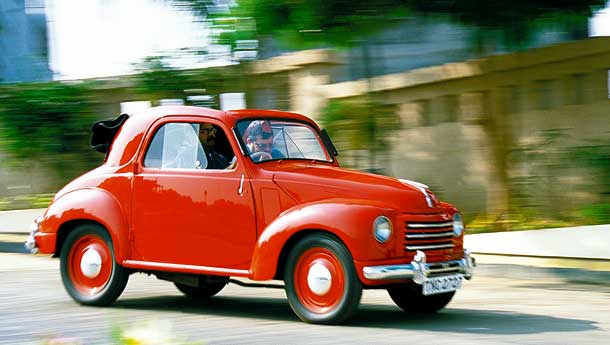 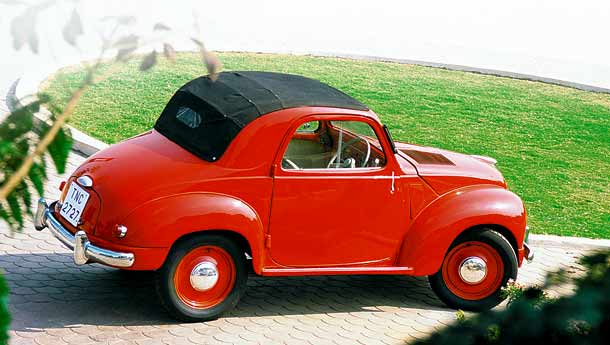 Mickey Mouse! Ha ha ha! He actually calls it Mickey Mouse, can you believe it?’
‘But guys, the first 1936 Topolino was indeed named after the Disney character. It says here, in this book, see?’‘Ha ha ha! Even the author doesn’t know his mouse from his elbow!’

Even more ha-ha-ha-s. At Motoring, every once in a while, we have this raging battle. According to me – and several renowned authors plus Fiat’s own historians – the first Topolino, the one with those, er, Mickey Mouse-like headlamps (see poster illustration) was affectionately called the Topolino – that’s what the Italians called Mickey Mouse, though Fiat’s official designation for it was Cinquecento or the 500. But according to my less informed and, ahem, hardly well-read colleagues, it’s just ‘Little Mouse.’

Like with the Volkswagen Beetle, which was never officially known in Wolfsburg as that, the name for the 500 was completely spontaneous. In fact, when it was shown at the London Motor Show in 1936, the year of its launch, Fiat’s UK branch had to issue a statement that this car was not called Mickey Mouse. Whatever it may have been called, it made history by being the world’s smallest mass-produced four-cylinder car. And it kickstarted Fiat’s reputation as a manufacturer of brilliant compact cars, a fact that’s acknowledged even today.

This particular model in front of me is the Topolino Cinquecento C of 1949 vintage. The ‘C’ in the nomenclature meant it was the third iteration of the 500. The second iteration came along in 1948, at the Geneva Motor Show, when Fiat launched the 500B with a marginally more powerful engine, incorporating overhead valves in place of side valves and a few more tweaks. Barely a year later, in March 1949, in keeping with the American trend of making cosmetic revisions without changing the internals, the ‘Mousey’ look was gone. The 500C debuted at the Geneva Motor Show, acquiring a contemporary appearance, with the headlamps faired into the wings and the spare wheel being accessed through a tiny hatch above the rear bumper. But the Topolino name still stuck.   You’re not going to believe it, this Topolino belongs to Adil Jal Darukhanawala, the editor of Overdrive magazine. Yup, we managed to get this Scoop! Exclusive! right from under our ‘rival’ magazine’s nose. Clever, aren’t we? Actually, the walking automotive encyclopaedia and passionate car & bike guy that Adil is, he couldn’t say no to us when we popped the ‘Um, can we feature your Topolino?’ question. Anyway, Adil picked up this car from Bangalore a couple of years back and restored it to a fine 1949 showroom level. And on a fine January morning, we went to Pune to drive and photograph this legend.

Drive? Easier said than done. This car is so compact that if you have a girlfriend along with you when you’re driving, it gets rather intimate. The only way to change gears is to put your arm through hers. No wonder the Italians are supposed to be great lovers. It’s those damn compact cars, I tell you. The dash is bare-basic and the two-spoke steering wheel is quite spindly. But the most prominent feature inside is the extra long gear lever. It won’t look out of place in a Tata 1210 truck, but here, in this tiny car, it felt quite disproportionate. But there’s a reason for that, which I’ll come to later.

Forget multi-function steering wheels, have you heard of multi-function ignition keys? Well, the one in the Topolino turns on the dipper and the headlamps as well! Pull the starter button, and the little four-pot motor starts up with a raspy note. Displacing just 569cc, the engine produces all of 16.5 bhp at 4400 revs – which, by the way, goes to the rear wheels. Dante Giacosa, Fiat’s legendary engineer (read his profile in the December 2003 issue, Dante’s Inferno) wanted to make this a front-wheel driven car, which would have been easy and economical to design and manufacture, but Giovanni Agnelli, the head of Fiat, had an aversion to front-wheel driven cars. Giacosa’s persuasion to shift to front-wheel drive in Fiat’s economy models would be successful only 30 years later, with the 124.

Meanwhile, I still have to come to grips with the car – though it has the conventional H-shaped shift, the long gear lever doesn’t seem to like me. First falls in place quite easily, and once I start moving, I attempt to get into second. Instead I get double-promoted to fourth, and the car stalls. Okay, once again... this happens a few times, until Adil himself helps out by pushing the lever to second. I putter around in second, enjoying the top-up feeling thanks to the long, foldable canvas roof that opens up all the way back. The engine is quite a cheerful little thing. Incredibly, for its 569cc size, it pulls the car (and the two of us heavyweights inside) up over a rather steep incline without missing a beat. I had my doubts whether it would make it, but Adil had supreme confidence in the Topolino, which eventually made it above the crest. No wonder people loved it; the car performs above what you expected out of it, and that too, without complaining.   In fact, it could attain a top speed of 95 kph, but I certainly didn’t check it out because, unlike modern cars, the stopping power of the drum brakes all around did not exactly inspire confidence. Going up and down for giving Param his pan shots, I had to plan about three days in advance to decide where to stop the car. Just joking of course, it’s just that us modern-day types take everything for granted in automobiles, forgetting that it was cars like these that have ensured that life is safe, fun and comfortable for us today. Every time I took a U-turn for those pan shots, I was amazed at the turning circle of the car – yes, I agree it’s a small car, but in those days there was no power steering and even small cars need not necessarily have small turning radiuses (radii? I was never good at geometry either).

Meanwhile I was still botching up my gearshifts, though the Topolino boasts synchromesh in third and fourth. Even after driving so many vintage and classic machines, I am quite cagey about shifting gears. A mis-shift or a grinding noise just scares the hell out of me, I felt like I hurt this loveable machine. But Adil was next to me, encouraging me to go through the gears.

Now the reason why the gear lever was so long was that it had to reach far inside the hood, almost up to the front axle. The development of the Topolino was a classic example of Giacosa’s genius at work. He had to make sure the car was not too powerful, yet peppy – and so as to avoid excessive road tax, it had to be light, comfortable and safe, compared to the rest of the existing competition those days. Simplicity and low cost was everything.

Taking into consideration passenger space and an ‘economic independent wheel suspension,’ Giacosa arrived at the conclusion that the engine had to be placed in front of the axle – most cars at that time had their engines placed aft the front axle, but Giacosa’s path-breaking idea is considered de rigeur in front-wheel drive cars today (he was barely 30 years old then). And using his experience in aeronautical engineering, the engine was supported by the chassis – ‘just like an aeroplane engine is by the fuselage,’ wrote Giacosa in his memoirs. ‘The shape and dimensions of the bonnet made it impossible to position the radiator in front of the engine. At best there was just enough room for the engine alone, provided its dimensions were really reduced... I came to the conclusion that the diameter of the cylinders could not exceed 52 mm with a 67 mm stroke if it was to fit under the bonnet of the bodywork. As a result engine capacity became 569cc,’ he wrote. Which is why the gear lever is so long, and the reason why the radiator’s placed behind the engine!

It’s really amazing when you look at Rodolfo Schaeffer’s styling of the first Topolino – you wouldn’t know the kind of thinking that’s gone inside those cute lines. ‘The body was much, much lower than anything built up to that time, it was Fiat’s first vehicle without running boards,’ writes Giacosa. But more importantly, because of its low centre of gravity, the Topolino could corner quite neatly, something the Italians would go on to appreciate a lot.

Giacosa’s ‘economic independent wheel suspension’ consisted of wishbones, transverse leaf spring and shock absorbers at the front while the rear had a rigid axle supported by semi-elliptic leaf springs, shocks and an anti-roll bar. Adil has added fresh Michelin 125 R15 rubber to his car and the wheels and wheel caps are right out of Italy.

When the 500C debuted, the mechanicals remained the same, but the new, contemporary styling made the car look much bigger that it actually was. But the truth is that with the styling exercise, the length of the car was actually reduced by an inch! The 500C would go on to become the most popular of all Topolinos, with 376,370 units sold until 1955, total Topolino sales from 1936 onwards being 519,646 units. The Topolino put Fiat on the path of mass-production, carrying them from strength to strength even after the ravages of the Second World War. Giacosa’s genius would still bloom, with his engineering wizardry seen in the 600 launched in 1955 and the 1957 Nuova 500, which took over from where the first Topolino left off.
Oh, by the way, it was called Mickey Mouse in Italy and Little Mouse in England. The issue is finally sorted, guys!