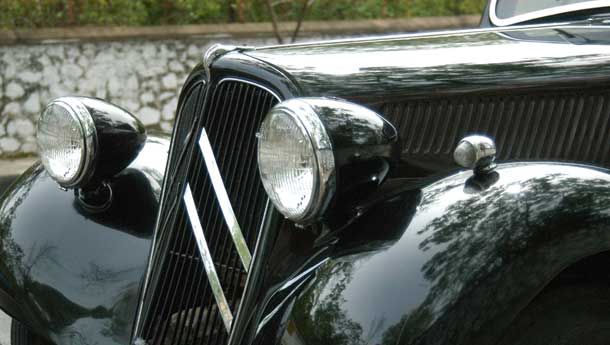 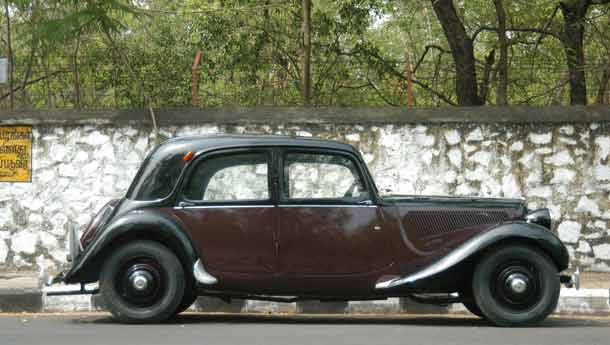 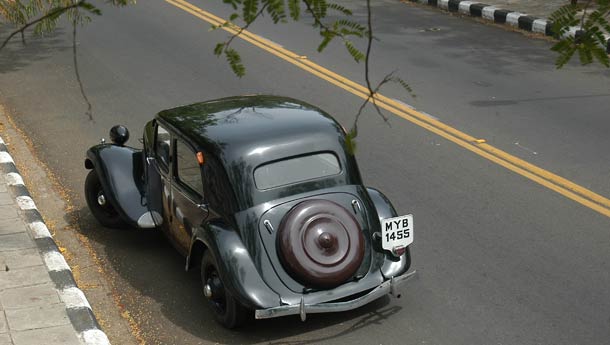 Look at that car. No big deal, right? Just another vintage machine... okay, maybe better looking because of its raked grille and flowing fenders, but nothing to write home about perhaps. If that's what you're thinking, then turn the page.

But, if you're still reading this, you'd better recognise one of the most advanced cars in the history of mankind. I admit it may not look the part, but it was a technological tour de force nonetheless. You know that under their dumpy skins, other Citroens like the 2CV boasted a host of innovations, while the DS was actually as futuristic as it looked. But it is with the Traction Avant that Citroen started it all, and got into the habit of making highly innovative automobiles.

When it was launched in 1934, the Traction Avant was the first mass-produced car that featured monocoque construction with front-wheel drive – that's what it's famous for – but there's more to it. It came with independent front suspension, 'subframe' mounting for the engine, gearbox and front suspension, hydraulic brakes, 'Floating Power' engine mounts, a lower centre of gravity, and a gorgeous shape crafted by one of the finest designers of that era. Phew! And later in its life – in 1948, to be precise – it even moved on Michelin X rubber, the world's first radial tyres. However, what it didn't have, and what I would have dearly loved at this moment, was power steering. If only Citroen had invented that too, then wrestling with the spindly three-spoke steering on Chennai streets would have been effortless.

Traction Avant, as everybody knows, means front-wheel drive in French – imagine a car being known by that attribute. What that translated to for over 750,000 drivers was better road-holding and driving precision. It's something we are used to today, but in those days it was nothing short of phenomenal. Most of the vintage machines I drive need constant steering corrections even to keep them on a straight line. No such issues here. Though the steering was a bit tough while on sharp turns, it eased itself once on the move. And the Traction was much easier to control compared to other cars I have driven of this era. It had none of that vagueness in the steering, nor was the rest of the car trying to catch up with the front; the marvel of an integrated body, no doubt.   Since it is low-slung and quite aerodynamic, the Traction doesn't get any running boards, which makes it look sleek and light. The classic look of the Traction was created by an extremely talented Italian called Flaminio Bertoni (who also penned cars as radically diverse as the 2CV and the DS). Bertoni, instead of sketching the design of the car and then making a three-dimensional model based on it, sculpted the gorgeous Traction from plasticine overnight. Not just that. The Traction's chief engineer, Andre Lefebvre, packaged it so brilliantly that he liberated plenty of space for passengers by shoehorning the gearbox ahead of the engine (call it out-of-the-gearbox thinking!) Add to that a light all-steel body (again pioneered by Citroen – remember, most cars used wood in their construction in those days) and an even distribution of weight and the Traction boasted facets that we look for in today's cars.

The Traction Avant I drove was a right-hand drive version from 1946. It originally belonged to a doctor in Mysore, who used it as a daily runner, before it was bought by Chennai-based S Srivardhan. If you remember, the Austin 7 and Morris 8 that we featured in last month's issue also belonged to Srivardhan, who's a district sales manager-cargo for Air India. And more importantly, a car freak and a big <I>BSM<I> fan.

Sitting inside that lovely louvered hood is a four-cylinder 1911cc motor that develops 46 bhp at 3800 revs. This short-stroke unit with overhead valves is a rugged little number that does an adequate job of propelling the Traction. In fact, it's so rugged that it kept on chugging even after production of the Traction was halted in 1955, being produced all the way from 1934 to 1957. The reason the engine noise and vibrations don't intrude into the cabin even today is thanks to Floating Power, a Chrysler innovation, where rubber mounts were used for the engine.

Though lovingly called Traction by everybody, the Citroen's official name when it was first launched was 7CV, a common usage at the time to denote a vehicle's taxable horsepower (CV stands for cheval vapeur). When Citroen, almost immediately after launch, added some width to the car and gave it a bigger engine, it was still confusingly called the 7CV, when it actually should have been 11CV for this motor.

A three-speed gearbox is paired to the engine and through some devious linkages, a lever juts out of the dash in front of you. You have seen floor- and steering column-mounted gear levers, but a lever protruding from the dash is something else – this innovation of Lefebvre was continued even in the 2CV and the DS! It seems a bit weird and awkward initially to shift the gears, but as I have written down in my precious notebook, it is 'so intuitive and easy!' For its age, the gears fall into place flawlessly, no doubt helped along by synchromesh in second and third.   Though the Citroen's overall performance is not exactly scintillating, in its day it was one of the fastest production cars around. It could do the standstill to 60 mph (96 kph) dash in a full 25 seconds, and when pushed, could achieve a top speed of 113 kph. It's a good thing it featured hydraulic brakes, then. The Traction sat lower than other production cars of its era, as it eschewed the cumbersome drive shaft and offered a lower centre of gravity. Besides, it featured a precursor to what we call a subframe today (two arms reach out from the firewall to which the drivetrain and the front suspension was mounted), and this, combined with front-wheel drive, allowed the Traction to offer brilliant roadholding, confident cornering and precise handling – a fact that was not lost on the French resistance during the Second World War. <I>And<I> the invading Germans too! Reportedly, you don't get good examples of Tractions produced during wartime simply because 'the car died for its country!'

Perhaps it saved a lot of lives, too. Since the Traction featured an all-steel monocoque body, it was safer than other cars on the roads too. In fact, to demonstrate just this, Andre Citroen (<I>See box: King Cog<I>) apparently showed a film at its launch in 1934 that had a Traction fall from a cliff. It landed, bounced back, rolled a bit and came to a halt on its four wheels. Yet, all it suffered was a broken window. Its doors could open and shut and it was then driven away!

Andre Citroen and his company went broke very soon after the launch of the car, so the French government persuaded Michelin to take over the company, which I must say, did a fine job in keeping this legend alive. Thanks to Michelin's funds, the Traction also received a 77 bhp 2867cc six-cylinder engine, which overcame the shortcomings of the four-cylinder unit in terms of performance. So much so that the Traction 15/Six was known as the 'Queen of the Road.' This also made it popular with robbers for making a fast getaway!

The Traction's ride quality was also superior to its contemporaries. It featured an all-independent suspension in the front, using torsion bars for springing, upper wishbones, radius arms and shocks, while at the rear, it used a trailing axle with transverse torsion bars, longitudinal radius arms and hydraulic shocks. Maybe it was good then, but it's a bit bouncy for my more modern bottom-end. I shouldn't be cribbing, at least not about a car that was so futuristic, so ahead of its time.

The manufacturer would go on to prove that the Traction Avant was no flash in the pan, as it immediately followed it up with the equally mind-blowing DS. Makes you wonder whether being innovative and avant garde was the exclusive preserve of Citroen, right?

Born in Paris on 5 February 1878, Andre Citroen joined the French Army as an engineer officer after his education. Once, when he came across wooden double helical gears as part of some machinery in Poland, he got the idea of manufacturing them in steel. He set up a small gear cutting business back in France and this is where the Citroen logo – the double chevron, which are actually two teeth of a double helical gear – appeared for the first time.

He was so successful in his venture that the automaker Mors asked him to run their operations for them. Citroen turned around Mors and returned to his business. During his time in Mors, he travelled to the US to see Ford's legendary River Rouge plant. Impressed by Ford's superb mass production ideas, he decided to implement them in France as well. In fact, he met Henry Ford in an attempt to set up a joint venture in France, which old man Ford declined.

Soon, the First World War began, and Citroen reported for duty in the army. There, he noticed that the French army was desperately short of ammunition. He offered to set up a mass shell manufacturing plant, which was accepted immediately by the government. With funds from the Ministry of Armaments, Citroen set up a facility at Quai de Javel in Paris. The plant was supremely efficient, and Citroen even introduced radical ideas then, like facilities for over 12,000 workers, support systems for women workers and the concept of food ration cards.

Within four months of the war ending, Citroen converted the Quai de Javel factory to produce automobiles, and production of his first car, the Type A, started on 28 May 1919. This, of course, was the first mass-produced car in Europe. The Type A came loaded with stuff as standard and was cheap to acquire, which made it a massive success. His automotive business was off to a flying start and soon Citroen was the biggest automaker in France, producing some well-built, cleverly engineered cars.

Andre Citroen was also a superb marketing man, relying on mass media advertising to sell his wares – his piece de resistance was putting up the Citroen name on the Eiffel Tower! He also set up auto finance and insurance companies, and set up another unit to mass produce Citroen toy cars, which was successful in its own right.

But Citroen was also a heavy gambler, and this, compounded with the general economic depression, made his automotive operations run into losses. His friend and biggest creditor, Edouard Michelin, then took over the company. And according to the law, Citroen was not allowed to take part in the running of the firm he had set up. His health eventually took a turn for the worse, and he died of stomach cancer on 3 July 1935. The Traction Avant was barely a year old then.