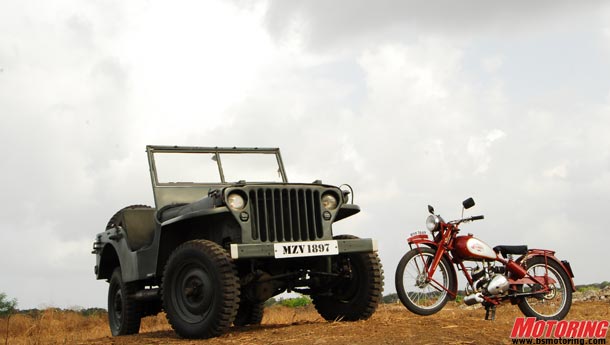 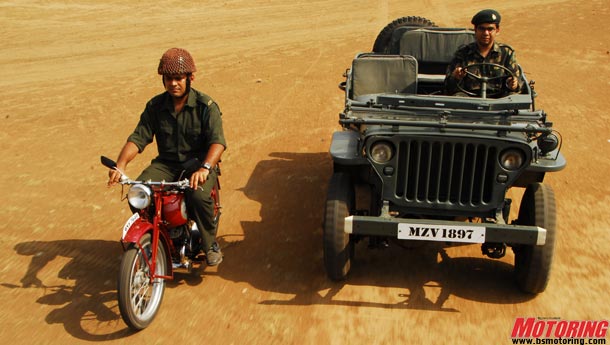 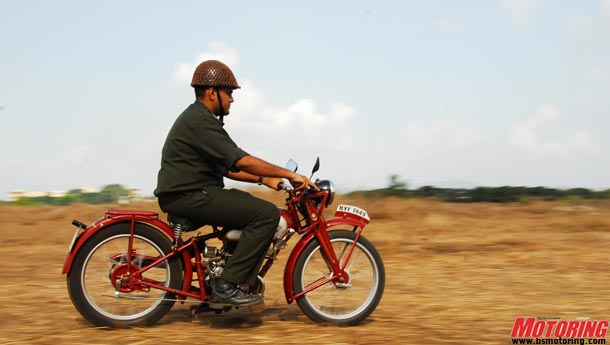 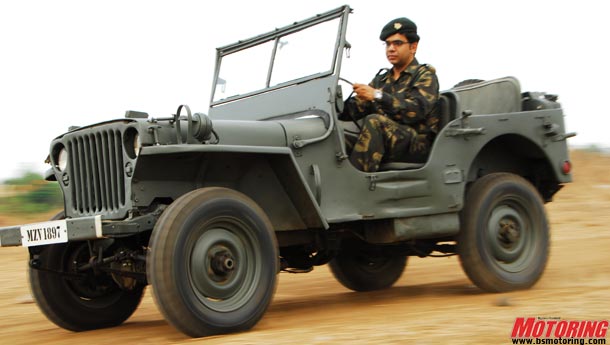 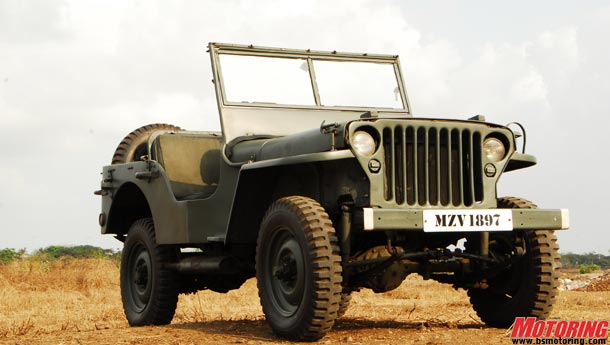 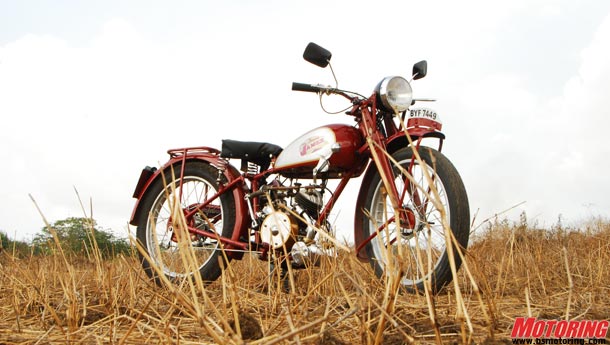 Catch phrases like ‘lily livered rats’, ‘those blimmin Jerries’, ‘dumkopf’ and Kamerad are etched in the minds of every single Commando comics lover. The dramatic visuals of exploding tanks, trains and aircraft, stories of deceit and traitors, of exceptional bravery and sometimes over the top drama has introduced dime a dozen young lads into the fascinating history surrounding World War II. Of course, the machines itself were always central to the stories and as Josef Stalin put it to the Americans in 1941, the side with the largest number of machines would win the war. That led the allied war machine to churn out hundreds of thousands of vehicles on assembly lines that didn’t stop to catch a breath until the end of the war in 1945. Two of those machines that made a big impact were the James ML and the Ford Jeep, which is why they adorn these pages in the best of livery and, well, passable army uniforms.

'Achtung! Englanders am Himmel', yells the soldier at the top of his voice, pointing into the night sky. A long drone of the air-raid siren cranks up, rousing slumbering German soldiers, and spot lights come on, searching the heavens for the birds of prey. In the distance, the silhouettes of the big Avro Lancasters can be seen, flying slowly like pregnant birds, their bellies filled with little explosive eggs waiting to be laid. The ack-ack guns swivel, gunner crews break into a sweat, reloading furiously as the barrels let off lead with small blazes from the muzzle flash suppressors.

Little do the Germans know, there is death coming to them from behind their backs as well. Another Allied aircraft, this time a Douglas C-53 Skytrooper, has dropped off some gifts for the Jerries - a bunch of famously lethal commandos. They leap off the aircraft in the dead of night, undetected as everybody's concentrating on fending off the bombers in front of them.

The paratroopers get their feet onto the ground and they are armed to the teeth. Their drop zone is a couple of kilometers away from the anti-aircraft gun nests and mobility could be an issue. Not this time, however. They've got their rides all right - little James ML motorcycles that were airdropped with them.

The Brits swiftly and silently proceed towards their mission objective, and rapidly put down the sentries.  Before long, the German guns are silenced forever. The bombers have safe passage.

This little scene might have been fabricated in this very fertile imagination of mine, but the James ML saw similar and very real action in World War II. Besides being parachuted out of aircraft, the ML or Military Lightweight, was used for marshaling duties in beach landings, before the larger but heavier motorcycles arrived ashore. Because of its diminutive size, the ML earned nicknames like 'Mechanical mouse' and 'Clockwork mouse'. But this little two-wheeler's maker had a long history and lineage attached to it.

The marque had simple beginnings way back in 1880. Harry James started the company to produce bicycles, which were a rage back then. In fact, many other British motorcycle companies, like Sunbeam for example, can trace their roots to the manufacture of these pedal-powered two-wheelers. The first true James motorcycles weren't on sale till about 1902. Dubbed the Model A, this was nothing but a Minerva engine bolted onto a bicycle with drive given to the rear wheel through a leather belt. The Model B arrived shortly after, with a Derby motor plonked into a triangular frame.

As can be seen, James started production of their motorcycles that were powered by engines outsourced from various other companies. Although this trend was largely followed by the marque throughout its existence, James did make their own engines as well. But these models were too few in number and most didn't go down too well with motorcyclists of that era.

Coming back to the ML, its origins can be traced to a pre-war design. In the 1930's, James almost exclusively produced lightweight two-stroke motorcycles, which was the reason why the company survived the Great Depression. During these years, the economic situation was in the doldrums and people didn't have too much money for expensive playthings like bikes - there were more urgent priorities like food to worry about. It is for this very reason that many brands which manufactured exotic but pricey motorcycles perished during this era.

When WWII began, the forces needed lightweight but capable machines and there was no time for much development either. James answered the call to duty with their ML, which was tweaked upon to make it suitable to be airdropped from aircraft. There were other two-wheelers used for similar duties as well, some of them being Royal Enfield's Flying Flea, Exelsior's Welbike and a gawky folding pedal cycle manufactured by BSA. After the war ended, the James ML was stripped of its olive green uniform and was introduced into the market as a civilian model. And there it remained, never to see action again, apart from getting its owner to work everyday and doing the odd grocery run.

Riding the James makes you realise that this Mouse is nothing like modern small capacity motorcycles. The smokey two-stroke Villiers '9D' 125cc engine puts out a minuscule 3.5 bhp. While most lawnmowers today make more power than that, the ML is good for a top speed of about 64 kph. That might not seem like much, but realistically, going any faster would be quite bloody scary.

If you were wondering why, well, I'll begin with the 3-speed gearbox that goes through its cogs at the jab of a petrol-tank mounted shifter. So to change gears, you need to let go of the throttle on the handlebar and fiddle with the knobbed lever with your right hand. That could get a little jittery, especially since the Clockwork mouse doesn't have much suspension apart from two springs underneath the Terry manufactured saddle and a pressed steel girder up front. Comfort wasn't quite on the design brief – it was simplicity and low weight of the motorcycle.

To that effect, it was truly well thought of. With about four litres of fuel and fully equipped, the ML weighs in at a mere 80 kg. The design is so spartan that the little flywheel mounted dynamo has no extra power even for a horn, other than a stamp sized tail light and a Millers headlamp that barely lights up a handkerchief-sized spot on the road ahead.

All in all, the ML isn't a flamboyant machine. But it is a motorcycle that was built for a purpose and it went on to fulfill all that it was expected to do. Although I cannot say for sure whether the machine I rode was actually chucked out of an aircraft, only to land in the backyard of the bloke I bought it from, I am sure that this motorcycle is a piece of history and I'm really quite proud to have had a tryst with it.


Dry hot air blew across the sand dunes as the sun started to rise to the peak. The atmosphere was quiet and as far as the eyes could see, there was nothing but sand across the desert floor. It seemed like yet another day for the German sentry at the watch tower who couldn't help but stifle yet another yawn. Then, just as he was about to turn around for yet another cup of char, the world around him exploded. Out of nowhere, three British jeeps burst into the compound, lobbed grenades and other explosives at the petrol tanks and were quickly making an exit. He raised his gun and tried to take aim at the enemy soldiers, but a crack of a rifle bullet burst through his palm, swiftly ending any opportunity of taking down the enemy. It was 1942, El Alamein and the tide of the war had started to turn the other way.

The jeep had become the mainstay of every single theatre of war. As General Dwight D Eisenhower, the supreme commander of the Allied forces would later put it, 'The jeep, the Dakota, and the landing craft were the three tools that won the war.' Indeed it did as it dug trenches, towed anti-aircraft guns and even aircraft, got dropped from them, carried wounded across frontlines to safety, acted as a mobile command post and even towed bogies on rail tracks. That's just a few roles the G.P. or General Purpose vehicle played. But the reason why it won the war for the allies was its ability to do everything, even inconceivable to the designers, wipe its brow and ask for more. The dogged determination of the jeep helped raise spirits of the Americans as they fought to reclaim every single island in South East Asia. Or the Russians who were getting pushed deep into their motherland by the Germans, keen on turning them into a tight spot – Stalingrad.  In all these theatres, the Jeep changed the outcome of the war, while back home everyone argued whether it was Popeye's Eugene jeep or General Purpose that helped coined the term.

It began in 1937 as a tender, which eventually ended up becoming one of the greatest machines known to man. For Bantam, technically the creators of the Jeep, the fortunes rose, but not as much as that of Ford and Willys-Overland who got access to the blueprints, courtesy the US Army. Over 6,60,000 of these jeeps would eventually see action and would later spawn other greats like the Land Rover and the Toyota Landcruiser.

It really is a fantastic machine to drive as well. That simplicity boils down also the Go Devil engine that powered the jeep. A side-valve 2.2-litre petrol engine with 60 bhp and in a vehicle that weighed less a tonne was just the perfect recipe to get a million strong army on the move. And the permanent all-wheel drive meant it could just get out of a sticky situtation at the drop of a hat. Generals, commanders and lieutenants alike swore by it. Troops landing at advance beach heads would love the fact that it could wade through chest deep water at places. The ease with which it could be maneouvred is just superb as I drove this example which was produced nearly seven decades ago. At parking speeds, its steering is lighter than most known power steering units. The 3-speed gearbox is surprisingly smooth and there's decent reserve of bottom end torque. It's so easy to drive and such a wonderful feeling that you can only help but wonder what it must have felt like for the soldiers back then.

For the period it was designed, it has some really swell features. Like the map light that doesn't give away your position to the enemy. Or the swivel head lamps on the first Ford GPWs that would act as engine bay lights for mechanics to work on them at night. Ingenuity and simplicity became one fo the reasons why the jeep would be copied by several manufacturers around the world once the war ended, and some continue to be built even today. Most of the war jeeps would later be transferred for civilian use and in some countries it would be converted into transport carriers that continue to this day. The jeep itself has gone on to influence the way of life of people who were never touched by progress and improve their way of life. Indeed then, when Dwight Eisenhower applauded the three vehicles that changed the course of war, neither of them were weapons.