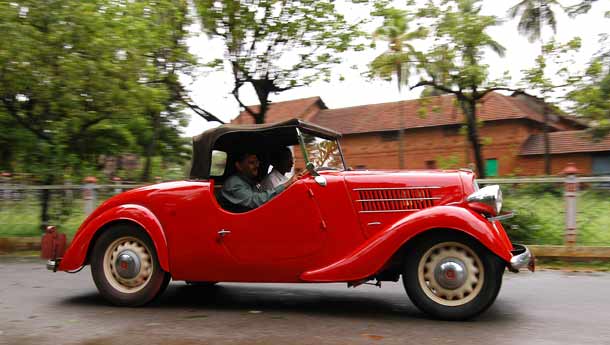 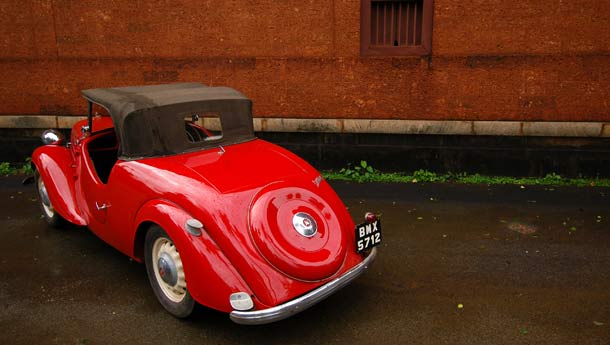 Driving vintage cars sometimes scares me. Usually, it has to do with bringing these machines to a halt. Given enough road, they pick up speed, but they seem to stop only on sheer willpower and all the good karma your forefathers have done. But what scares me even more is if I have to come to an emergency stop.

I believe saying the right prayers in such moments works wonders and ensures your path skywards is, well, without emergency stops.Braking was the least of my worries in this early 1937 Skoda Popular Roadster. You see, it had a three-speed gearbox, where putting it into neutral was as easy as winning Rs 200 crore in the Super Lotto or something like that... in fact, the chance of you winning one of these lotteries is actually much higher than getting this gearbox into neutral.

Okay, so where’s the scary bit, you ask. I am just coming to that. You check for play in the gear lever and you are reasonably sure it’s in neutral. Then you press the little button mounted on the floor with your left foot to start the car, when Wham!, it scoots towards a very solid looking wall in front as if it’s a long-lost lover. Brakes! Now imagine doing this every single time you start the car. So why can’t I keep the clutch pedal depressed when I start the car, you ask. Dude, how do I start the car then? Bend down and press the floor-mounted starter button with my left hand or what? Or should I depress the clutch pedal with my right leg? How corny is that?

There is a reason why the gearbox is slightly vague, which I will come to soon. Meanwhile, after numerous attempts I eventually come to grips with that wayward gear lever with throws that are more suited to one of those Tata 1610s and finally start driving this little Skoda. In the pictures, you can see that it looks gorgeous and proportionate, but behind the wheel, it’s not the case. Since it’s a sporty, cosy Roadster for two (wonder why they gave it a mother-in-law seat at the rear?), you sit low and grasp the large three-spoke steering a little awkwardly. Then you realise that your forward vision is hampered thanks to the hood, which instead of being low-slung is pretty high up.

Compared to the sleek, flowing rear lines and the fashionable cut of the doors, the front end is butch and high. The reason I presume is because the Roadster is one of the seven variants of the Popular series of Skodas, including a delivery van. So with a little nip here and a tuck there, they created a Roadster without too much of re-engineering. And the dash is incredibly bare too. Except for a round speedo in the centre in which two semi circles for the fuel and battery display are integrated, there is nothing else. Oh, there are two hollows that function as glove boxes, how could I forget those. Since the Popular Skodas were made for both right and left-hand drive markets, a central display made great economic sense.   Powering the Roadster is a tiny 995cc four-cylinder motor that develops 22 bhp at 3000 rpm. But it’s so noisy that it will give the Gallardo in this issue a complex, let alone the other modern day Skodas elsewhere in this issue. The output may not seem too much, but in this case, it does a decent job of moving this convertible. It does not make the Roadster go too fast, an estimated top speed of 80 kph is more like it. Yet, it’s enjoyable in the way all machines of this sort normally are: a sensation of driving that’s here and now, a (mild) wind in the hair feeling, a motor that’s conspicuously going through the motions and a conscious push emerging from the rear wheels. My drive however was not that smooth, as I was still groping between the three gears, losing revs in the process, and sometimes stalling it... which meant the excruciating and frightening process of starting it all over again.

The reason why the gears were so vague is because unlike other machines, even of that era, the engine and gearbox were not unitised. While the engine was in the front, the gearbox and the final drive were far away at the rear. Besides, you should remember, this is an ancient car. But at the time this car was around, it turned around the fortunes of the manufacturer, and the Popular series (two-door coupe/convertible, four-door sedan/cabriolet, roadster, van, open military car) is generally considered as the landmark model in Skoda’s history. It sold well not only because of its price – the roadster, for instance, was the cheapest in the series, selling for 17,800 crowns, about as much as a motorcycle with a sidecar – but for its low fuel consumption as well, a guaranteed 14.5 kpl. And thanks to this watershed model, Skoda would remain the top Czech automotive manufacturer for a long, long time (the country had no less than eight serious domestic car makers before WWII).

So how did the Popular change Skoda’s fortunes? For that, you’ll have to go beyond the skin. And a little back in time. A small car was necessary because the economics of the post-Depression era demanded it. So when the Standard was launched in 1933, it was the smallest Skoda to emerge from Mlada Boleslav. The Standard had a novel feature to it. Instead of the conventional ladder frame that was present in all Skodas till then, the Standard came with a backbone frame, consisting of two soldered longitudinal channel sections. It was forked at the front, to accommodate the engine and gearbox, while at the rear, the final drive housing was connected to the propeller shaft. The advantage? It was substantially lighter (faster, fuel efficient), less complex and cumbersome (cheap to build) and made passengers feel they were not cargo.
But the Standard did not become Popular (literally) till Skoda worked at it and improved it substantially. The backbone frame was now a steel tube through which the driveshaft ran and not pressed metal plates, the gearbox was placed at the rear along with the final drive, a differential was incorporated and the bigger 995cc engine (which still attracted lower tax) was introduced. It came with independent suspension too, with upper wishbones and lower transverse leaf spring at front and swing axles with transverse leaf spring at rear. The automobile was then badged Popular, freshened up in appearance several times and Skoda never had to look back since then.

The early Populars especially went on some record-breaking journeys without breaking anything. In the ‘By Land to India’ expedition, seven students drove from Prague to Kolkata and back in four months in 1934. In 1936, a writer called FA Elstner and his wife Eva decided to do ‘100 days in a Small Car.’ So they went with their Popular in a ship to the US, covered 25,000 km in 47 days in the car across the States and returned to Czechoslovakia. That was proof enough for customers about the durability of the car, so it was no wonder that the Popular did big numbers, contributing in its own way to make the Skoda cars of today. Which I’ll admit, have sure-stopping brakes and precisely-shifting gears. Still, trepidation in driving ancient codgers is part of the fun, isn’t it?

(We would like to thank Dr Veerendra Heggade, the Dharmadhikari of the Manjunathaswamy Temple, Dharmasthala for allowing us to drive and photograph the Skoda Roadster)