1937 Lincoln-Zephyr - Design of the times 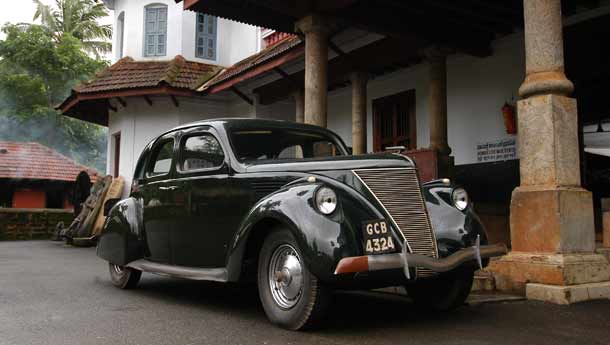 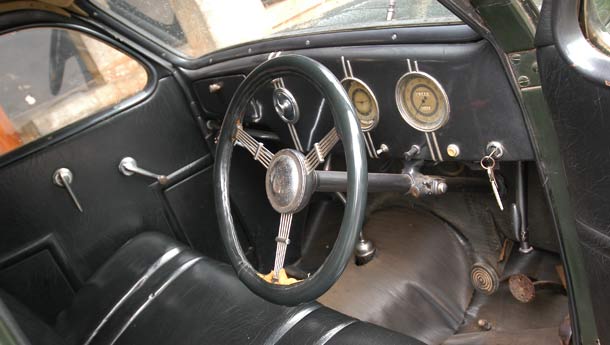 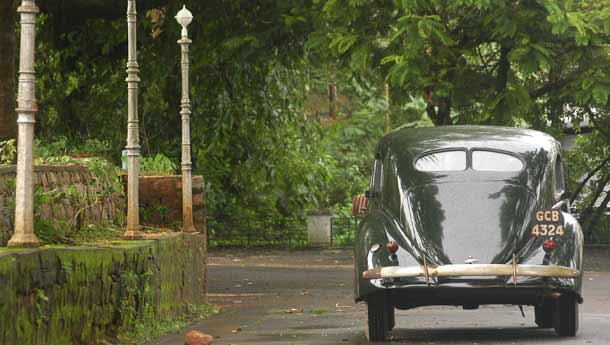 If Philip Powell were here with me, he would have done a double-somersault. It wouldn’t exactly be a decent sight to see a Canadian on the wrong side of 70 do a stunt like that, but that would have generally been the effect had he seen this 1937 Lincoln Zephyr. In the flesh. In India. In a town 300 km away from the nearest metropolis. An unlikely car in an unlikely setting, but India, as everybody knows, is full of surprises.

Philip Powell is a person whom I have never met, but we communicate with each other regularly – he used to write on classic and vintage machines for one of the biggest websites in the world, about.com. Now he has his own blogsite, www.classicaldrive.com – highly recommended, do visit it. Together we even ran a series on the Pranlal Bhogilal collection for about.com. Philip has always nursed a desire to visit India, in fact, one of his ancestors was in the British army ages before we got independence. And he has an eye for beauty – in fact, I got in touch with him after I read one of his articles on Art Deco designs in cars https://vintagecars.about.com/od/timeline1/ss/artdeco_ era.htm).

So now you know why I thought of Philip when I saw this Zephyr? No? Because the Zephyr is one of the finest examples of the Art Deco movement represented in automobiles. Okay, this Lincoln is not exactly in concours de elegance shape – the headlamp covers are missing, the metal strip in the centre of the grille has disappeared, and so has the Lincoln Zephyr V-12 badge on the grille. But that doesn’t distract you from the sheer beauty of  this automobile.

Before I go on, I guess it’s time to tell you where we found this brilliant piece of American automotive design. Dharmasthala is a town about 75 km away from Mangalore, or about 325 km from Bangalore, if you please. Famous for its Manjunathaswamy temple, it’s also a place vintage/classic car buffs should make a pilgrimage to. Surprised? For generations, the Heggade family has been the final authority of the temple and over time, they’ve done a fantastic job of running the whole town too. The current ‘Dharmadhikari’ is Dr Veerendra Heggade, who loves old cars (and bikes, horse carriages and other memorabilia), all of which are housed in the Manjusha Car Museum. Among the 40-odd cars there is this magnificent 12-cylinder Lincoln (some more cars are forthcoming in the next few issues!).

Okay, let me confess that I couldn’t drive it – the car just wouldn’t start, this despite a team of mechanics working all day before we landed at Dharmasthala. So I can’t tell you what the experience was like behind the wheel of this Lincoln. Sad, because driving an ancient 12-cylinder machine is not something one does too often. Still, the Zephyr is too significant a car in automotive history to ignore simply because I couldn’t drive it.   The troublesome V12 engine, which kept me from driving the car, was also the Zephyr’s weakness. For a V12, it was not large – it displaced only 4381cc to develop 110 bhp at 3800 rpm and 26 kgm at 2000 rpm. Paired with the engine was a three-speed manual gearbox that sent power to the rear wheels. The British magazine The Motor tested it, and managed a 0 to 60 mph (96 kph) timing of 14 seconds and a top speed of 90 mph (144 kph). Its problem was not that of overall performance, as the engine did not have to move too much mass. You see, for a sedan this big, it weighed only 1,520 kg, because the Zephyr boasted unit construction.

But there are other reasons why the engine let the rest of the car down. People were used to better performance from Lincolns – in fact, Lincolns were used as getaway vehicles by crooks, so the police also had to buy them as chase cars! Another reason could be that there was a mismatch in real life between what the name connoted and what it eventually turned out to be. The Zephyr (a gentle west wind) name came from the 1934 Burlington Zephyr, a gorgeous streamlined train that was a landmark for two reasons – with its diesel engine, it effectively ended the steam era, and two, it set new speed records. So it was a Lincoln with an evocative name but with just about adequate performance. And the other reason is that this engine was reportedly trouble-prone. I have a feeling that since it was one of the first instances of parts-sharing within Ford (this V12 was based on a ‘flathead’ Ford V8), the engine was not built to the exacting standards of the late Henry Leland (See: Status of the art).

Despite this, the Zephyr actually rescued the Lincoln marque, because it was quite successful. America was just recovering from the Great Depression, and the market for large 12-cylinder luxury cars had plummeted. Ford realised this and readied the Zephyr for launch. The timing couldn’t have been more perfect. The star of the New York Auto Show in 1936, the Zephyr was one of the cheapest cars you could get, yet it was a good enough car not to tarnish the prestige attached to the Lincoln name. Thanks to unit construction and Ford’s efficiency in mass production, the Zephyr could be priced at just a fraction of what the hyper-luxury Lincoln Model K commanded, which brought a whole bunch of new customers into the fold. Lincoln managed to sell about 15,000 Zephyrs in the first year of operations itself, thereby saving the marque from disaster.

For that money, you got a car that was a reflection of the times. Though it still carried over Ford’s transverse springs for suspension and mechanical brakes, externally it looked every bit contemporary and modern. The Lincoln Zephyr was the bold new car for a brave new world. Its aerodynamic, teardrop looks (called a more evocative ‘streamlined’ then), uncluttered (and un-American!), European looks, gorgeous detailing all combined to make it an instant design classic. New York’s Museum of Modern Art later would call it the first successful American streamlined car – yes, the 1934 Chrysler Airflow was the first streamlined production car, but it was not as successful as the Zephyr in its original form.

The Zephyr was penned by John Tjaarda, a Dutch-born stylist, who worked for Briggs, a coachbuilding firm that supplied bodies to Ford. Tjaarda had worked on a rear-engined concept (the Briggs Dream Car) in 1933-34; perhaps this was something that caught the eye of Edsel Ford. Eugene Gregorie, who was a stylist at Ford, worked on Tjaarda’s design and refined it, while also making it suitable for series production. The result was a car that was breathtaking in its simplicity, elegant in proportion and futuristic in its outlook. The long, triangular hood was narrow at the front and was topped by a sleek grille with crisp horizontal lines. The headlamps were faired-in into the fenders, the rear wheels had skirts to make it even more elegant, while at the rear, a small split-window was the only break in the flow of sheetmetal.   The Zephyr’s design would not just influence future Fords and Mercurys; it is rumoured that even Dr Ferdinand Porsche came under the spell of Tjaarda’s creation while designing the Beetle. The Zephyr received a facelift in 1938, when the grille became a two-piece unit that sat lower on the face of the car. It also contributed in the making of another classic, the Lincoln Continental, which Gregorie created specially for Edsel Ford for his vacation in Florida – this one-off led to another series of iconic Lincolns. Thanks to the Second World War, Lincoln had to attend to the war effort, and the Zephyr brand would cease to exist after 1942, a beautiful car’s life cut short in just six years. Well, after 60 years, the brand is back, but in the form of a badge-engineered Ford/Mazda.

But an elderly gentleman I am familiar with is just not pleased about it. Read what Philip Powell said about both the Zephyrs (https://vintagecars. about.com/od/historygreatmoments/a/newzephyr_old.htm?nl=1), and you’ll know why he is not so ecstatic about the new car that wears that hallowed badge. Such is life, Philip. Come let’s drown our sorrows in classicaldrive.com

STATUS OF THE ART

Two competitive American luxury car marques, and they are actually linked! Did you know that both Cadillac and Lincoln had the same father? Yes, his name was Henry Martyn Leland (1843-1932). Leland was a genius in precision engineering, who eventually moved to Detroit from Rhode Island to set up a machine tool firm. His reputation spread and soon he started supplying engines to Oldsmobile. Leland then became an integral part of the auto industry, when along with the Detroit Automobile Company, he established Cadillac Automobile Company in 1902 – this happened after he had a tiff with Henry Ford while at the Detroit Automobile Company. But their paths would cross again.

However, in seven years, Cadillac became part of William C Durant’s General Motors consortium. Legend has it that during the First World War, Leland wanted Cadillac to contribute to the war effort by building Liberty V12 aeroplane engines, but when Durant refused, Leland, along with his son Wilfred, quit GM. They then set up the Lincoln Motor Company in 1917 (yes, the company was indeed named after the legendary American president) and manufactured about 6,500 Liberty engines.

After the war, the Lelands re-entered the automotive industry, and the first Lincoln cars – the L series – were launched in 1920. Leland’s engineering was so good that the V8 he built for his cars remained the blueprint for succeeding American V8s for a long time to come. However, that did not translate to financial success, which led to the Lincoln Motor Company becoming bankrupt in 1922. The economic situation at that time also was a reason. At this time, Edsel Ford, the 25-year old son of Henry Ford, realised that it was a good business proposition to enter the luxury end of the car business, and convinced the old man to buy Lincoln. Thus, in 1922, Lincoln became part of the Ford Motor Company.  Was it the end of the Lelands’ contribution to Lincoln? No, it lasted... for about four months. Thanks to a disagreement between Henry Leland and Henry Ford, the Lelands quit, after having supposed to stay back to manage Lincoln. Edsel then became the president of Lincoln, and the future of the marque became inextricably linked to the Blue Oval.

With the help of superb coachbuilding, powerful engines and quality engineering, Edsel Ford did a good job in establishing Lincoln as a premium brand, which counted Thomas Edison and Herbert Hoover as its customers. The Lincoln K series and the Zephyr did amazing work in strengthening the brand. The original Continental, which was based on the Zephyr, became a strong sub-brand by itself. After again contributing to the war effort during WWII, Lincoln carried over pre-war cars for some time. The most significant car after WWII was the Continental Mark II, launched in 1956, that set the design standard for luxury coupes. Over the years, Lincoln’s product lineup became more and more common with Ford, and today, one of the finest American marques is nothing but a badge.