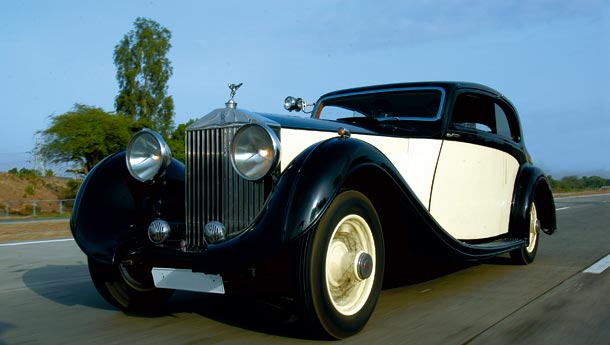 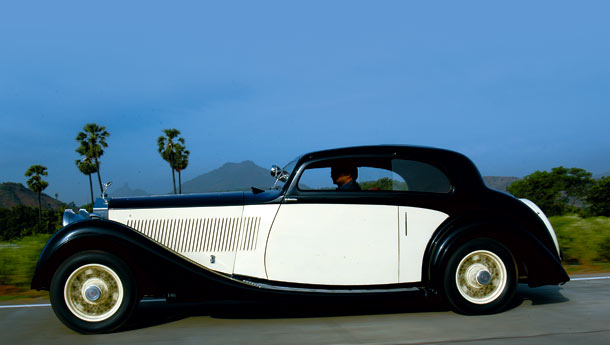 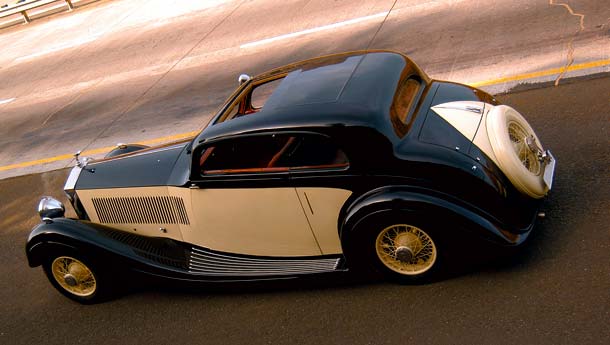 When I am senile and dribbling, with no control over my various appendages, with one foot shakily planted in the grave, and someone asks me, ‘Hey gramps, what were you doing on 28th May, 2004?,’ with a clear glint in my eye, a ramrod posture and an articulated tongue, I will be able to exactly describe what I was up to on that day: ‘It was a Friday, and I was driving an automobile crafted by the immortals. It was a 1935 Rolls-Royce Phantom II Continental – in fact the last one ever produced – with a gorgeous Streamline Coupe body by Gurney Nutting. I was driving it on what was then the fabulous Mumbai-Pune Expressway – now of course, it’s used for parking cars. I distinctly remember the speedo nudging 65 mph, that’s over 100 kph, mind you, and that was merely walking speed for the over two-tonne Rolls. And if you know how to calculate, young man, the car was almost 70 years old then. But the moment I cherish the most was when...’

Cut to the present. As I was saying, the best part was when the Roller entered one of the tunnels along the Expressway. The six-cylinder engine was gently humming along, and I was piloting what felt like an imposing but utterly gorgeous locomotive with endless power on tap, making me feel, at least in those precious few seconds, imperious and invincible. Like the Viceroy of the British India before Independence. Suddenly, day turned into night. The Spirit of Ecstasy was bathed in yellow light, gleaming somewhere in the distance in front of me, cutting a path like a motorcycle outrider. The lights of the tunnel were moving fast, highlighting the curvilinear forms of the fender and reflecting all over the car – precious jewels rolling and dropping off a work of art. And mesmerising me with their strobe-like effect. It was hypnotic, heavenly.

Everybody knows that all Rolls-Royce cars are special, but why is the Phantom II considered to be the best among ‘the best cars in the world’? To somebody like Ralph Stein, one of the most respected automotive writers in the world, it was the greatest Rolls-Royce ever built. And Raymond Gentile, one of the world’s greatest authorities on the marque, who’s written a full book on just the Continental, ‘it was Henry Royce’s last and greatest masterpiece surpassing in every facet of design excellence and manufacturing technique than even the Silver Ghost.’ Gentile also attributes its greatness to its lowered, shortened chassis and the finest examples of classic coachwork that complemented it.   Surprisingly, the birth of the Continental version wasn’t planned. Briefly, this is what happened. The Phantom I, when it was launched in 1927, was essentially a new six-cylinder engine on a modified old Silver Ghost chassis. Soon after its introduction, Rolls-Royce started work on a new, more rigid chassis with a lower centre of gravity, semi-elliptical springs on all four ends instead of the rear ‘cantilever’ type of the Phantom I and an upsweep at the rear end of the frame. This new chassis, along with the six-cylinder motor, was meant for a new car, the historic Phantom II. (Which came to life in the most turbulent of times, during the Great Depression, at a staggering price point and yet was immensely successful – but that’s another story...)

However, Royce wanted to break with convention. He felt that there was a market for a powerful, self-driven car, but his sales department in London thought otherwise. So in 1930, Royce decided to go ahead and build himself a car like this for his winter retreat in France. He asked his chief designer Ivan Evernden to modify the Phantom II chassis and build a compact body around it. Evernden took the Phantom II chassis, which had a wheelbase of 150 inches and reduced it to 144. With several other modifications, he built a beautiful prototype of the Continental, which he entered in the Grand Concours d’Elegance at Biarritz in September 1930. Competition was strong from owners of marques like Isotta-Fraschini, Hispano-Suiza and even Rolls-Royce, but when the results were announced, it was the underdog that won the Grand Prix d’honneur! It couldn’t have been a better launch for a new car and it effectively ensured that the Phantom II Continental became a production reality. (Evernden, much later in life, said, ‘I do not believe Royce ever intended to use this car personally, but he said so just to get it made.’ Touché.)

That’s how a legend was born. The Continental was thus a short wheelbase version of the Phantom II and was also lighter, consequently offering more performance, plus a better ride thanks to stiffer spring ratings and high speed handling qualities. The name particularly meant that it was well-suited to be driven on the continent. At that time, while the United Kingdom had only narrow roads and country lanes to drive on, most of Europe boasted straight and wide roads. And the famed German autobahns were also being readied for use. As for me, the Mumbai-Pune Expressway was just perfect.

This 1935 Phantom II Continental, with a unique ‘Streamline Coupe’ pillar-less, all-aluminium body by Gurney Nutting, was the last one to be manufactured by Rolls-Royce. Of the only 280 units built in its short span of five years at Derby, this one was specially ordered for the Maharaja of Jodhpur and eventually ended up with a collector in Mumbai. Who graciously (and courageously, I must add) allowed me to get behind the wheel of his prized possession.

Well, if this is what Royce thought of as a compact owner-driven car, I wondered what a Rolls-Royce chauffeur-driven truck would be like. It’s over 20 feet long and as wide as a Tata 407 truck and the rear-hinged doors open and shut like those of a vault. And you don’t enter the car through the driver’s side, but from the passenger door as you’d have to otherwise pole-vault over the long handbrake and the extra long gear lever placed on the right of the driver. There’s adequate room inside for five passengers but it’s clear that all the attention has been given to the driver and the front passenger. It had a feature that was much-talked about then – a sun roof – and a neat electric rear windscreen curtain that drops or rises at the touch of a button (boo to today’s Mercs). There are plenty of gauges on the wooden panel to distract your attention, but it’s the giant four-spoke steering that dominates the whole cockpit. The windscreen is an apology, can’t believe a car so large can afford to have a windscreen so small. But I guess it has to be like that because it’s function that’s following form – any other way and it would mar the fabulous lines of the coupe.   Sitting smug inside the long, louvered hood is a sublime 7668cc inline six rated at about 110 horsepower. Not much perhaps, but the magic of inexhaustible cubic capacity is something to be experienced all right. The engine whispers instead of revving and it’s more relaxed than a three-toed sloth during siesta time. Yet, it’s a grand tourer in the surest sense of the term. The Continental has been designed to swallow distances without stress and in fact the fuel tank has enough capacity to get from England to the south of France without tanking up along the way! It’s got so much torque that you start from standstill in second gear. The gear lever, as mentioned earlier, is placed on the right-hand (-leg?) side of the driver and it has an open gate to ensure you shift properly. Well, I don’t think it was necessary as it falls into place perfectly.
The reason for it being so precise is that unlike in the Phantom I, where the engine and the gearbox were two separate units, in the Phantom II, the two units were joined and housed together, just like how it is in today’s cars.

Initially, to barely keep the Continental in a straight line on the Expressway, I had to keep making minor steering corrections. It was some sort of jostling for control between me and the Rolls – my steering input and the car’s direction output were totally mismatched and I was thinking what the hell was the Rolls-Royce ad for the Phantom II talking about, its ‘steering control’ and ‘ease of operation’ et al. As well as Ralph Stein’s comment that it had a quick, accurate steering. But then in a little while, I got the hang of it; it became second nature to keep the giant on track. In fact, I became so comfortable with it that I could rest my right arm on the window sill and drive it like a Mumbai taxi-wallah.

Today’s much touted multi-function steering wheels are not a patch on the Continental’s wheel. For instance, above the centre boss, was a ride height adjustment lever – right on the steering wheel, mind you, and not in the middle of the dash like in some top Mercs. Ride control could be set to Min or Max depending on your mood and the road conditions. I felt more comfortable with the firm settings, read as more in control and confident actually. Then there are two other levers on either side of the steering wheel boss. On the left is the throttle control, essentially to be used like cruise control, and on the right was the ignition timing, marked Early and Late. Need to climb without having to downshift? Vehicle fully loaded? Simply slide the lever upwards and the engine summons enough torque to clamber without fuss. Similarly, you can modulate your speed with this lever – you can even crawl at 20 kph for hours without the engine getting all heated up.

In no time I was doing 100 kph, and didn’t even feel it. With a further thrust on the accelerator pedal, the Continental surged gently forward and collected enough speed without letting you know, unless you actually glanced at the mph-marked speedo. The top speed of the Continental was 95 mph (152 kph). In fact Rolls-Royce had released an ad warning about driving on continental high speed roads and on ‘continuous high power touring,’ where they advised in all seriousness not to exceed 75 mph (120 kph) of continuous speed on the Phantom II. To quote the ad: Speeds of this nature will not cause unnecessary wear and tear, but if higher speeds than these are maintained, then the engine must invariably suffer however well designed or constructed it may be. Amen to that.

Such was my experience with a very special Rolls-Royce, an automobile that moves as well as it looks. Now will you be able to forget what you have seen and read here?

There has hardly been any major engine or body work done on this Rolls-Royce – in fact, it has never gone through a restoration. Only the interiors have been brilliantly restored by Mumbai-based Marespand A Dadachanji