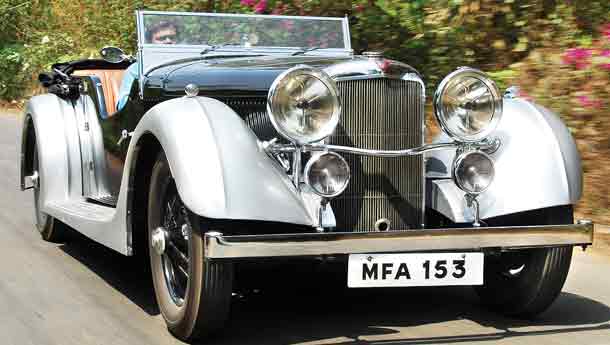 You have heard of ghost limbs, I’m sure. But have you heard of foot memory? It happens quite often to people who drive old cars for a living. You see, we also drive new cars quite regularly, and everybody knows the pedal placement in these. But in some vintage and classic cars, for some godforsaken reason, the clutch-brake-accelerator pedal arrangement is not sacrosanct. Imagine if there is no standard for something like this today... you would have cars wrapped around each other at every corner.

As you might have guessed, the Alvis Speed 25 is a bit off. The pedals, as seen from left to right, are clutch-accelerator-brake. Ha, ha, ha. Think it’s very funny, do you? Because of what I call foot memory, my leg kept reaching for the accelerator when I wanted to BRAKE! It’s not funny if you are driving a precious and pretty powerful pre-WWII car that belongs to Vijay Mallya and not you.

You should see the way the car flew over a speedbreaker. All the occupants in the car, which included Joshua and his cousin from Down Under went Up Above. We were all lifted several inches from the car towards the sky like in those cartoons and landed back with a thud. Good thing the suspension systems in these cars were built to last a war or two. But the foot memory disease ensured it kept happening a little too often. Once it was a chicken that actually crossed the road and I almost made a sandwich out of it, and the other one was when I was backing up against a wall for a shot. Scary. Remember, this car is called the Speed 25.

Evocative name for a big, luxurious car which tilts the scales at almost two tonnes. And it could really go. The driving position is sporty in a 1930s kind of way. You are seated low, stretched out and the outsize steering wheel makes you feel you are really steering something unlike most of today’s cars. Then there is the dashboard, an exquisitely crafted slim wooden panel that is lined up with instruments and gauges from one end to the other! The temperature and speedo is at the extreme left end, so you know what that means, don’t you? ‘I say, old chap, tell me what is that hot thing in my face – is it a low-flying magpie or the radiator cap?’ Or even ‘Were we going frightfully fast or was it this cow that’s splayed on our bonnet?’

The 3571cc straight-six, massaged further by three SU carburettors, develops 106 bhp at 3800 revs which could catapult it to a top speed of over 152 kph. And sending all those horses to the rear wheels is a four-speed manual synchromesh gearbox. The whole car comes through as being very masculine and tough, the ‘manly’ Maruti Suzuki SX4 is a feminine wimp next to this car, for example.

The engine’s power really comes through in the way the Alvis surges forward. This is a fast, powerful car and it doesn’t hide the fact. And the power is on tap across the four gears. You could move the car from standstill in fourth and it goes without hesitating. Likewise, if you want to crawl, no problem, you can even do that in fourth. The flexibility of the engine is vast – really, they don’t make petrol engines like these anymore. Or even pedals like these anymore. The throttle pedal is tiny, as if to indicate that small, measured inputs are more than enough to make the Speed 25 thrust forward. Which is exactly the case, because the engine is really responsive and acceleration is quite instantaneous for a car that is almost 70 years old.
Thank goodness Alvis was constantly innovating. They introduced servo assistance for drum brakes from 1937 onwards (Phew! I can’t imagine how it would have been otherwise). The gearshifts are also brilliant. Alvis was one of the pioneers of synchromesh in all the forward gears, offering it in their cars way back in 1934. For a car this old, I have never experienced gearshifts so smooth and sure-slotting.

Compared to its competition, the famed Bentley 3.5 litre and the Lagonda 3.5 litre, the Alvis Speed 25 was way ahead in terms of engine output and top speed. The latter two cars couldn’t go beyond 144 kph and did not develop more than 100 bhp – remember, we’re talking about marques that were known for their performance more than anything else. Alvis’ achievement is even more remarkable considering they were initially specialists in making large volume high quality cars, who shifted to making expensive grand tourers in limited numbers after the Great Depression of the 1930s. Though today the Bentley and the Lagonda are acknowledged to be great cars, no one gives the Speed 25 – a better car than these two – its due importance. Then there is also the exhaust note, again strong and muscular, but not good enough to blow the other two’s reputation away.

The Speed 25 was quite a popular model for Alvis, and reportedly some 400 units were made. It was preceded by the Speed 20 which had a 2.5-litre engine and was followed up with a more powerful 4300cc model that could easily achieve over 160 kph, but it was not as refined as this car’s 3.5-litre engine. Though production of the car would go well into WWII, up to 1940, Alvis got into serious armament manufacture and passenger automobile production would take a backseat.

Alvis was also one of the first car manufacturers to introduce independent front suspension, while the rear features a live axle supported by semi-elliptic leaf springs. The ride of course is what you would expect from cars of those days, a little too bouncy for comfort, but handling for a 70-year old car is amazing. It can handle corners pretty well and the only thing that doesn’t allow it to corner really hard is, er, me. I still haven’t forgotten that foot memory experience, you see.