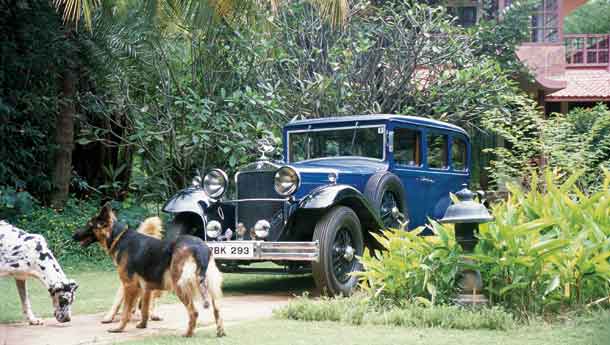 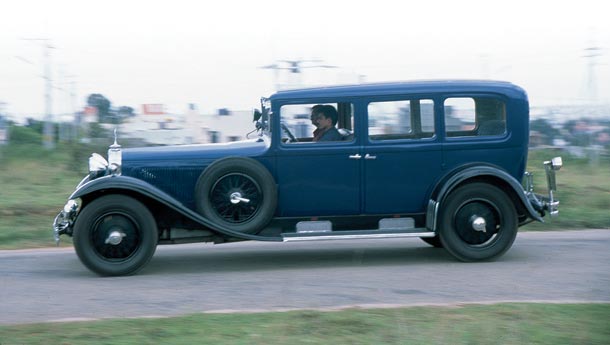 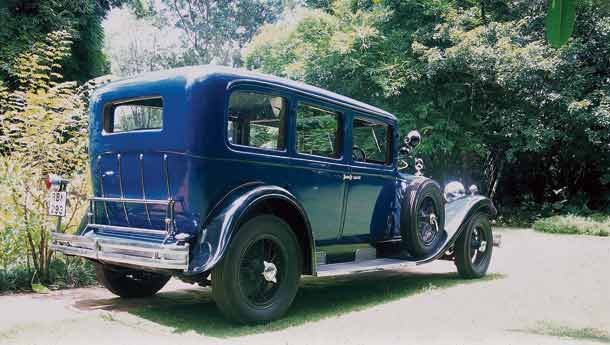 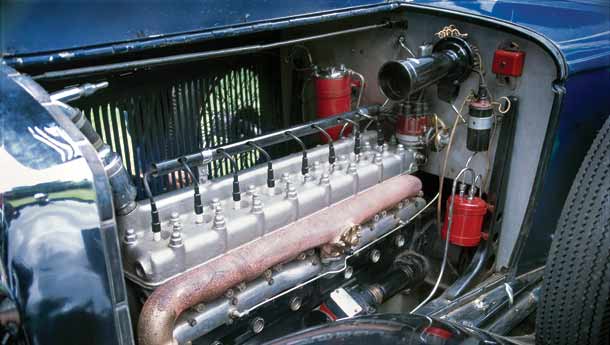 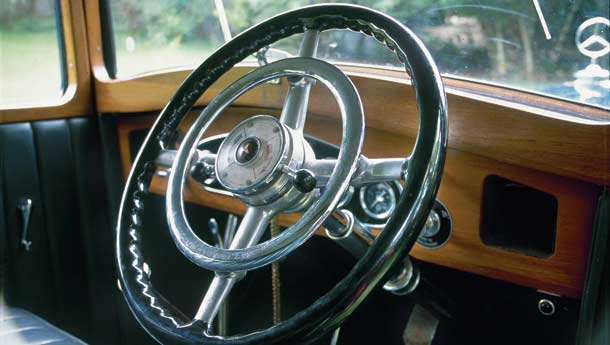 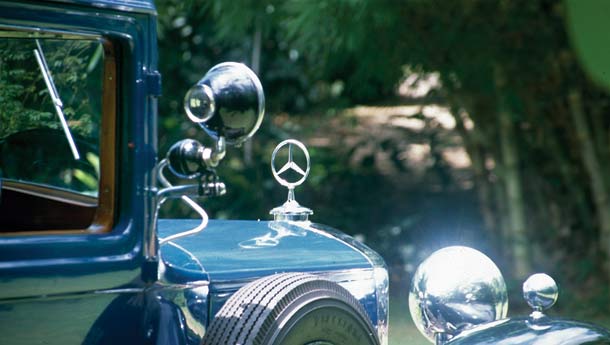 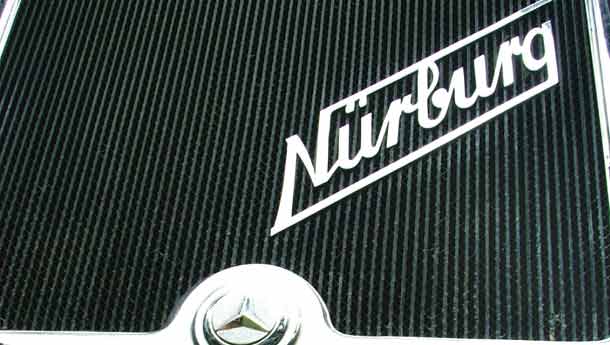 When Janis Joplin beseeched God in her hit 1970 number, Oh Lord, Won’t You Buy Me A Mercedes-Benz?, I am sure someone higher up had already done the original version. That too, a whole four decades before the rock star. The person in question was none other than Pope Pius XI, who might have crooned the song into the hotline to heaven and perhaps immediately – that is, in July 1930 – received a spanking new Mercedes-Benz Nurburg 460 with Pullman bodywork for himself (See box: Heavenly rides). Yes, the first Popemobile was a Mercedes, and it was the Nurburg.


So what was so special about the Nurburg that made it suitable for the Holy Father? For one, it was powered by an 8-cylinder engine which, frankly, was not for everybody. Besides, it ran like silk, it could be customised beautifully and luxuriously upholstered, and was one of the most prestigious models from Mercedes at that time. It was certainly not cheap – it was priced at 14,500 marks at a time when other German 8-cylinder cars cost between 8,400 and 13,250 marks.

So if that was the case, could any Indian Maharaja be far behind in acquiring one? This Nurburg you see here once belonged to the Maharaja of Rajkot, and has since found its way into the hands of Dr Ravi Prakash in Bangalore. Dr Prakash, well known in vintage/classic car circles, has an awesome collection of machines that run on both two and four wheels, all parked at his farmhouse on the outskirts of the city. Not just that, the place is worth converting into a museum – it has automotive memorabilia by the tonne. Entire walls are covered with steering wheels, hubcabs, signages, the works!   We took the Nurburg out of the farmhouse to drive and photograph it. The locals seemed hardly surprised that a gleaming, ancient motorcar was vending its way on their roads – as if it were an everyday event. In Mumbai, I would have been mobbed, as the Mercedes is highly attractive. Ironically, in those days, its looks were considered classical thanks to its tall chassis and stolid proportions – almost old-fashioned, rather than reflecting the current flowing trends of that period. Something the locals here on the outskirts of Bangalore already knew, perhaps.

But what they wouldn’t have known is that I was driving the first ever Mercedes-Benz passenger car to feature an eight-cylinder engine. And what I could have told them further was that the engine and the car were developed by none other than Dr Ferdinand Porsche. Yup, Dr Porsche stepped into the
place of Paul Daimler as chief engineer of Daimler-Benz and was instrumental in developing this model. The Nurburg was Dr Porsche’s riposte to the Horch 8 developed by Paul Daimler (See box: Battle of the Eights ).

Sitting in the driver’s seat, I thanked automakers for creating SUVs because if not for them, it would be difficult to get used to passenger cars of the past. The Nurburg is gigantic and you sit tall. Unlike earlier Mercs, where the instruments and gauges were scattered all over the wooden dash, they are now sensibly placed in a central console. Among the various displays, the anti-clockwise speedo is optimistically marked at 120 kph, with indicators marked to tell you in which gear you should be at a particular speed. I could make out that one of the displays was an electric clock, but everything else was confusingly marked in German.   The steering, like in all the Mercedes cars of its generation, was one of those multi-function units, but I wondered how  anybody could drive and fiddle with those levers at the same time. That’s because it’s so tough, so tough, so tough to move the car from standstill that I thought that Dr Porsche had fitted in a steering lock to prevent non-royal chauffeurs from driving the car. Whoever speaks about a fine, well-weighted steering wheel should come and meet me sometime. Finally, after shifting to first, I managed to point the star on the hood in the direction I wanted to go, and the steering eased up a bit. The engine, for all the bits that have gone into it, was hardly noisy, and seemed eager on the move. I worked my way through the H-pattern four-speed gearbox – though it took me several attempts in each gear to get it right – and was now comfortably piloting this mini-truck.

The Nurburg hissed up and down the roads, but it was quite an effort when I had to take a three-pointed turn. To engage reverse, you have to lift the long gear lever upwards and shift it to the extreme left top, which means you keep knocking on one of the dials with the lever. And needless to say, rear visibility is like, um, wearing sunglasses on a moonless night in a place without electricity. You are so intimate with the engine that the heat seeps in through the wooden firewall and finely bakes whatever is there below your knee. While the brakes... they, er, do stop the car. Eventually.

Formally called the 18/80 Nurburg 460, this Merc made its debut at the Paris Auto Salon in 1928. If you have been impatiently waiting to find out whether the ‘Ring had anything to do with it, yes, you’re right. During the development of this Merc, it was tested for a full two weeks for over 20,000 km around the Nurburgring – the track had recently been opened in 1927. Today, virtually all car makers, even the American ones, are doing what Daimler did way back then!   But giving it the fancy Nurburg moniker didn’t mean the car was a performance machine; it was nowhere near Dr Porsche’s feared supercharged legends. The 4600cc straight-8 developed 80 hp at 3400 rpm, and at a pinch, the fastest Nurburg could barely touch 110 kph, considering it weighed over two tonnes. But what it could do was run for ever without tiring. A Nurburg participated in a two-week long endurance marathon at the Eifel circuit, covering over 13,000 km with ease. The reason for its durability was the brilliant engine construction. Like the Dr Porsche-designed inline-6 engine which was further supercharged, the cast-iron cylinders of the inline-8 were cast as a single unit along with the top of the crankshaft housing, while the alloy bottom section also served as an oil sump for the pressure-circulated lubrication system. Like the six, this engine also features twin-spark ignition. But why did Dr Porsche not supercharge this? My guess is that a blower was better used for cars on the track, while this was more like a sedate luxury cruiser.

The standard Nurburg sat on a wheelbase that was over 12 feet long, but in an attempt to make it a bit more sporty, a short wheelbase ‘K’ variant was offered. Since there was hardly any price difference between the two, buyers stuck to the long wheelbase version, including our Maharaja too. Talk about more car per car. Later in its life, the Nurburg received a bigger 4918cc 100 hp engine, but the Nurburg 500 was still not exactly setting the tracks on fire.

The Nurburg rides on 20-inch rubber and the suspension setup is typical for these cars – rigid axle at both ends with semi-elliptical springs. While I was too busy trying to pilot this car to figure out whether I was actually riding comfortably or not, my able colleague Shreenand was rather unhappy. He was bouncing around in the rear, you see.   Still, he shouldn’t be complaining, as it’s a pretty decent place to be in. A comfy sofa set with armrests is placed at the rear, and two foldable seats are fixed to the partition behind the driver. A sliding glass panel also separates the driver from the passenger, so the Maharaja (Nandu) could commute in peace, leaving his chauffeur (me) to handle the heat emanating from the engine. I guess I should do a cover version of
that song: Oh Lord, Won’t You Buy Me A Chauffeur-driven Mercedes-Benz.

This year, Mercedes-Benz is celebrating 75 years of supplying Popemobiles to the supreme pontiff. Ever since the Nurburg was gifted to Pope Pius XI in 1930, several highly customised Mercedes limousines, landaulets and off-roaders have made their way to the Vatican.

The first Popemobile, the eight-cylinder Nurburg, had Pullman bodywork borrowed from the luxurious 770 Grosser (Grand) Mercedes and was modified meticulously for its holy passenger. A throne chair, with fine silk-brocade upholstery was installed, while the roof lining was embroidered with a dove – signifying the Holy Ghost. The interiors also featured matching wood and metal trim. The Holy Father could signal the chauffeur about the speed and destination through a control panel fitted at the rear. There was no doubt that Pius XI was excited about his new set of wheels. When a Daimler-Benz delegation handed over the car to him, he went on an hour-long trial run through the Vatican gardens. ‘A wonderwork of modern engineering,’ he’s reported to have said.

Several Popes after Pius XI too used the Nurburg, and after covering about 40,000 km, it was retired from active service. In 1983, the Nurburg was sent to Stuttgart for an extensive renovation at the Mercedes museum workshop, and was returned to the Vatican in late 1984. Just like Pius XI, Pope John Paul II also went immediately on a trial run in the restored Merc around the Vatican gardens. The Nurburg can still be seen at the Museo delle Carrozze in the Vatican.   BATTLE OF THE EIGHTS

Though the silky smooth Nurburg’s straight-8 had the genius of Dr Porsche behind it, it was not the benchmark among German  8-cylinder cars. That honour went to the Horch 8, coincidentally developed by Paul Daimler after he left Daimler-Benz – in his place as chief engineer came Dr Porsche. Daimler had in fact left in a huff, involving a disagreement with the management on the development of an 8-cylinder engine!

At Horch, Gottlieb Daimler’s son created one of Germany’s first  8-cylinder engines. Launched in autumn 1926, the Horch 8 preceded the Nurburg by two years. Featuring double overhead camshafts, this inline-8 was beautiful to look at, brilliantly crafted and technically superior to the Mercedes eight. Also, it was priced much lower than the Nurburg – at 13,250 marks, compared to the Nurburg’s 14,500. Around 8,490 units of this straight-8 were produced, before production ended in 1931.

I had the opportunity to drive a Horch 8 limousine at the Audi forum in Ingolstadt in November 2004. Beautifully put together, the Horch was an eyeful. And that was before I opened the bonnet. Inside was a jewel of an 8-cylinder engine. Displacing 3132cc, this motor developed 60 hp at 3200 rpm and could propel the limo to about 100 kph. But more than overall speed, the straight-8 helped the Horch glide about. The gears, with a little bit of love and attention, fell into place beautifully and the Horch 8 whispered around the Audi Forum arena. There was no indication of anything mechanical going on inside the hood, it was absolutely sublime. An unforgettable experience.