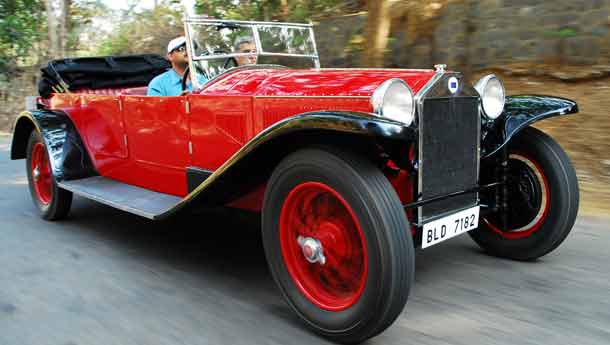 Even if it was not a watershed model in automotive history, the Lancia Lambda is something else to drive. Low, long, Italian and red, it has all the elements that define a fast European touring car. Stretched out in the driver's seat, with an oversize four-spoke steering wheel in front of me, the Lambda is anything but silent. Well, if it's low, long, Italian and red, it had better be noisy as well!

The Lambda I am driving is a long wheelbase version, so there is plenty of car behind me as well. Still, unlike other equivalent cars of its era (especially those which boast a wheelbase of over 11 feet!), the Lancia feels light and fast. Again, for its length and its age – it's a 1928 model, so that makes it almost 80 years old – the Lambda goes like the blazes. And the engine is so responsive! Here I am giving photo-ops to Pablo who's in another (modern) car in front of me, and I can modulate the distance between these two cars simply with the throttle pedal. If he says come closer, all it takes is a dab of the pedal, and with an additional surge of noise, the geometrical Lancia grille is right up the Nikon's lens. But if you think it sounds easy, perish the thought. My right foot is at an angle, and the only way I can press the tiny, delicate accelerator pedal is by using the little-toe side of my shoe. I think I could have given even more precise outputs if I had driven this car barefoot.

However I have ensured that I stay in one gear for Pablo's tracking shots, as I seem to muss up my gearshifts, especially between second and third. Every time I make the attempt, I seem to grind them. And that makes the most horrible noise possible for a vintage car fan. Sitting in second, I am amazed by the speed it attains and the flexibility of the engine. Heck, I'll need the Mumbai-Pune Expressway if I ever get around shifting to fourth. Smoothly.

The Lancia I am driving belongs to Vijay Mallya, and it's housed, along with other machines that you might have seen in these pages before, in Mandwa, a beach resort off Mumbai. Accompanying me in the car, if you are already not familiar with him from the earlier stories, is Anil Ovalekar, the man who takes care of these machines. Anil reaches over to the short-for-its-era gear lever and somehow smoothly snicks it from second to third. Before I have time to wonder how he did that, the Lambda's beautiful Jaeger speedo is hurrying towards the 80 mph (128 kph) indicated on it. This Lambda could attain a top speed of 115 kph in real life.

The Lancia Lambda came with some amazing, revolutionary features that made it not just an incredible car to drive, but a landmark automotive model as well. The reason why it was so perky was because of its unique four-cylinder engine. What's unique about a four-cylinder engine? Well, this one was not an inline-four, but a narrow-angle V4 – the world's first, if you please. The Lambda, which was produced between 1922 and 1931, received engines with three different displacements during that period. The early ones had this, a 2120cc motor that developed 50 bhp at 3250 revs. Later models featured a 60 bhp, 2370cc engine followed by a 70 bhp, 2570cc engine. Early Lambdas came with a three-speed gearbox, but along the line, it was replaced with a four-speed transmission that's also seen here. The V format of the engine allowed it to develop better torque than an inline-four, and the other advantage was that Lancia could make it low and sporty compared to other brick-like cars of its era. Impressive, no? Oh, but there's more to the Lambda.

This was the first car to feature monocoque construction. Instead of a separate chassis with a body built around it, the Lambda's chassis and body were combined to form a load-bearing structure. Legend has it that Vincenzo Lancia was inspired by boat construction to create the unitary chassis for his now-legendary automobile. His creation was essentially a large U-shaped tube with cutouts for the doors, a transmission tunnel integrated into the floor, a luggage compartment at the rear, and finally, strategically made holes to lighten it up further. It was a path-breaking idea, and allowed the Lambda to be much safer and nimbler than any other contemporary car. Combined with the torquey V4, unitary construction allowed the Lambda to offer better dynamic handling than any other car that was sold then.

So did that make it a rather obvious choice for motorsport? You bet. But it's only that Vincenzo Lancia did not want to spend money on racing programmes, and wanted to engineer and build better cars instead. Still, that did not stop privateers from rallying the Lambda successfully. Vincenzo, however, made an exception in 1927 and 1928 when he allowed specially built Lambdas to take part in the Mille Miglia. This car however is more of a tourer, sitting on the optional long wheelbase (135.8 inches) than the standard 122 inches. Which means it's really long, ok? The monocoque was also altered to allow for wider doors.

The Lambda's special features don't end here. The front suspension is another unique Lancia touch; it's an independent setup featuring sliding pillars and coil springs. No wonder that I could get really close to the car Pablo was tracking me in. For a car of its age, the front suspension allowed it to be remarkably precise and allowed for a greater degree of steering control. You must remember that in vintage cars, the steering wheel and the rest of the body usually have different thought processes. The rear live axle with semi-elliptic suspension is however conventional, but since it's really long, I would have no idea whether the rear passengers enjoyed the ride. They sure have no reason to complain about legroom, however.

The Lambda did quite well for itself, selling about 13,000 units in the nine years it was built, even though it was expensive. Vincenzo Lancia was content with sales, as he was the sort of person who would make the kind of car he wanted rather than what customers wanted. And that, unfortunately, spelled the end of the Lambda. You see, the unitary construction meant that there were limited options the coachbuilders could offer on the Lambda. And this was an era when the coachbuilding industry was strong, and cars could be heavily customised. By the end of the Lambda's era, Lancia made the shift to a conventional chassis. Much to the delight, I presume, of coachbuilders like Viotti of Turin and others who built some really gorgeous bodywork on these Lancias. Sigh. You win some, you lose some, I guess.

Vincenzo Lancia, born on August 24, 1881, was the youngest of four children. His father, who was in the preserved food business, was wealthy and had already made plans for little Censin, as young Vincenzo was called. However, as usually happens, studies did not interest Vincenzo. He found his calling in life when the Ceirano brothers opened a workshop for bicycles in the Lancia family estate and Censin was taken on as a novice mechanic. The Ceirano brothers soon started work on making automobiles and the Lancia scion was completely smitten by the new-fangled machines. Though his father gave him permission to work with the Ceirano brothers only as an accountant, Censin couldn't keep his hands away from the internal combustion engine.

In July 1899, Giovanni Agnelli made the Ceirano brothers an offer they couldn't resist, and their plant and patents for their automobile became Fiat property. Vincenzo was then 18 years old and was taken on by Fiat as a test driver. After a few years in Fiat, the entrepreneurial bug bit Vincenzo, and with his friend Claudio Fogolin, he founded Lancia on November 29, 1906.

The big and burly Vincenzo was completely involved in developing the cars that bore his family name and he often used to test drive them himself. His attention to detail and originality in execution paid off. Lancia soon became a successful marque, and the cars that Vincenzo built were pretty advanced for their time. They were sporty, well-built and were known for their path-breaking features. But Vincenzo wouldn't live long to see the progress of his marque. On February 15, 1937, he passed away after a heart attack at the age of 55.