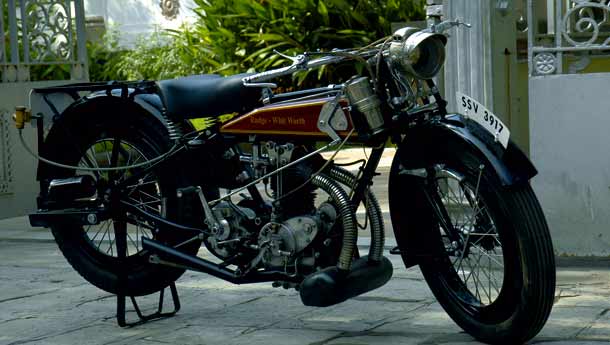 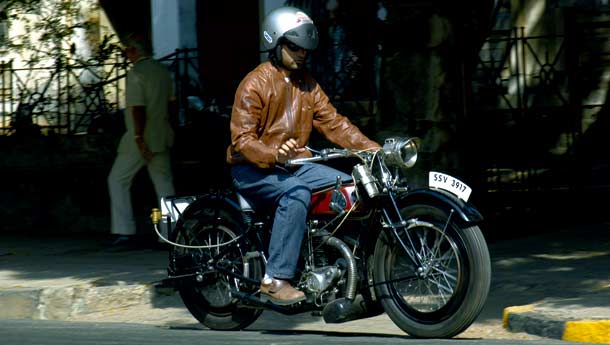 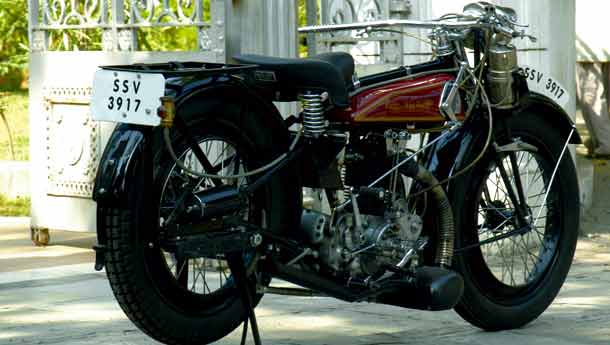 Quick, what are the names that come to your mind when someone says ‘classic British motorcycle?’ Messrs Royal Enfield, Triumph, BSA and Norton probably stood up and raised their hands instantly. If you knew your classics fairly well, you would probably have said ‘Hey, let’s not leave out the Vincents, Brough–Superiors, Ariels, Scotts and Sunbeams of the world either.’ Fair enough, you’re pretty clued up. Or so you think. What if we took you aside and asked ‘What about Rudge, then?’ ‘Whudge?’ would likely have been your response, or ‘Eh?’, at the very least.

That, at any rate, is certainly how I reacted when told that a mint condition Rudge Whitworth was mine for the riding. I pulled up at the owners house with an air of intense curiosity, with Param in tow. Rahul Dangle, the chap who restored the machine, was waiting for us there. Now, there are bike enthusiasts and there are bike ENTHUSIASTS and Rahul is a paid-up member of the latter club. Want incontrovertible proof? If you had happened to enter his room during the restoration period, you would have been confronted with the sight of the Rudge strewn liberally all over it, reduced to its constituent parts. ‘My mother threw a fit every now and then’, he said, ‘but I just went about my work without bothering too much. In fact, even when the owner called once in a while, I would politely tell him to let me take my time’. The owner in question, Freddy Turel, joined us soon afterwards. A jovial Parsi gentleman, Freddy has been collecting vintage cars and bikes for years now, and is the president of the Mercedes Club (the Three Pointers) in India. What is it about Parsis and their automobiles, I ask you? Personally, I think they have equal parts blood and high-octane petrol running through their veins.   As is sometimes wont to happen with old machines, the Rudge was feeling a little cranky and wouldn’t start until Rahul showered a little attention on it. Various nuts were unscrewed, oil drained into a hub-cap (from a Mercedes, no less), plugs cleaned and carburettors drained until, with a fairly flatulent ‘whap’ and much spewing of black smoke, the 500cc single gave voice and settled into a steady chug-chug. The bike really was quite an eyeful, glinting in the morning sun. The external pushrods and rockers clanged away in an impromptu exhibition of how an IC engine works, while the carburettor cheerfully dripped petrol onto the ground (‘Don’t worry, that’s normal’, said Rahul). Immaculately restored, it looked like a fun ride before I had even swung a leg over the seat (which, by the way, is very comfortable).

Motorcycle riders in the 1920’s must have been incredible multi–taskers, because bikes like the Rudge feel like they were built for an octopus. I sat there and stared a little blankly at the endless number of levers on the extra-wide handlebar, while Rahul patiently explained which one did what. There were the usual clutch and front–brake levers, plus one lever each for adjusting the ignition timing and the fuel–air mixture. The accelerator was also a lever, which had to be operated with one’s right thumb. Thankfully, the Rudge had a mechanical oil–pump and a spring–loaded accelerator (unlike, say, the Triumph SD on which Sac scared himself silly a while ago), so I wouldn’t have to whirl about like a windmill trying to push or pull a hundred things at once.   A mighty stomp on the kick-start, a nervous but smooth shift into first (via the tank-mounted hand-shifter) and I trundled down one of Dadar Parsi Colony’s shady avenues. The 500cc, four valve, 3.5bhp powerplant had a surprising amount of get-up-and-go and I was soon making a spectacle of myself, lurching forward with a flick of the thumb and frantically dragging my heels on the ground to try and stop the darn thing (the brakes, as you may have deduced, weren’t exactly F1 carbon–fibre). The long–stroke engine produced a large amount of torque as well, so the bike didn’t complain even when I accidentally shifted from first to third – it simply hitched up its socks and chugged along in an unperturbed manner. As enjoyable as the Rudge was to ride, the absolute coolest bit of it was the carbide headlamp. Picture, if you will, the steps you have to take before a ride at night: add lump of carbide to water in canister, wait for resultant gas to reach the headlamp via tube, light a match, open headlamp cover, hold match to gas spout et voila, a little flame emerges to serve as illumination.

I can tell you, with a straight face, that I had more fun on the little Rudge in a half hour than I’ve had with many of our long–term bikes in a months worth of riding. Freddy obviously figured that out, because he said ‘I have another bike, a big one. Want to take it for a spin?’. I almost danced with delight as he brought out the machine, a massive 1300cc...wait a minute, that’s another story. Watch this space!

Chocolate rudge: The Rudge is a sweet old machine to ride (right) and comes with quaint features – a carbide headlamp (above left), snail-like accelerator lever (above), an air-pump for a quick top-up (above right) and tank-mounted gear lever

Dan Rudge started a company in 1868 to make velocipedes and it was eventually acquired by the bicycle manufacturer Whitworth Cycles in 1894. The two bicycle manufacturers merged names and started selling motorcycles in 1911. They had several early innovations, including a spring-loaded stand, a front-and-back linked braking system, a spray-action carburettor and, in their early 1912 model, the Rudge Multi, a belt-gearing system that offered 21 gear ratios. In the 1920s Rudge built four-valve cylinder heads for their 500cc single, a version of which won the 1928 Ulster Grand Prix – ‘The World’s Fastest Road Race’ – with a speed of 80.78 mph. As a result, their next model was named the Ulster and offered a top speed of 90 mph. Rudges were reliable too; Stanley Glanfield took a Whitworth on an 18,000 mile world tour
in 1927.