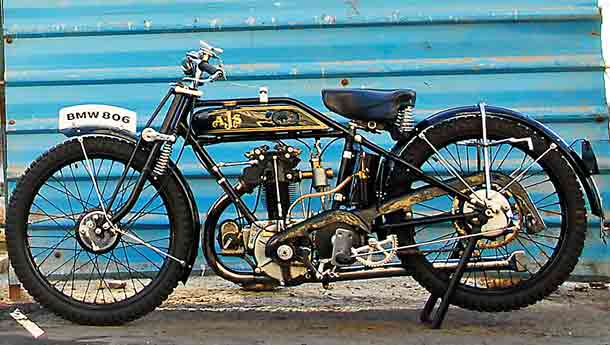 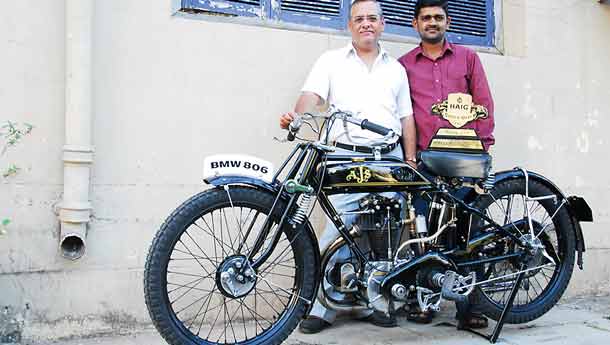 We were looking for something special to feature in this Summer of Speed issue and it had to be great if we were to maintain the standard of last year, if not exceed it. The motorcycle had to go like stink (obviously), be as rare as a pink, striped elephant, have oodles of charm and have a rich history behind it. When I got to know about the bike you will read about in the next few pages, I knew that we had just the machine we were looking for. To most of us, a bike dating back to the 1920s doesn’t really conjure up an image of speed. Well, that’s true in most instances – until one rides a bike like the venerable AJS H-7 pre-war veteran racer.

Back in 1897, four Stevens brothers – the sons of a blacksmith – built their first motorcycle, albeit with a proprietary engine. The engines they built were being sold to other companies and in order to retain their identity, they realised that they had to build their own motorcycles under a brand name of their own. So, in 1910, the name they chose was the initials of the name of one of the brothers, Albert John Stevens, as he was the only one among them with two Christian names. AJS, primarily based in Wolverhampton, England, got involved in racing with a vengeance, and by the 1930s had already racked up 117 wins at the Isle of Man TT races. Among their most cherished products were the Porcupine, 4 and the 7R. The AJS H-7 I got to ride rolled out of the factory in 1924 and is a racing model. Its evolution culminated in the iconic AJS 7R, which helped fill out the AJS trophy cabinet and was one of the first ‘homologation specials’, in the sense that it was a race bike the public could buy. Popularly called the ‘Boy Racer,’bikes of this period are rare to start with, and thoroughbreds like this one rarer still. Most racing machines were altered by their owners to make them go faster, so it’s next to impossible to discern a totally stock machine from one that was tweaked, because so few remain today. This, however, does not reduce the exclusivity of the bike and this AJS H-7 is still priceless.

It’s certainly a handsome machine. Finished in glossy black with gold pin striping, it grabbed our attention as soon as we parked and walked towards Farokhi Bengali’s home. The lines are extremely clean and the bike looks very sporty. This is what I love about pre-war motorcycles – they were built for performance, but always ended up looking good enough to be art museum display material. The handlebar is wide and is swept low, with the levers having their fulcrum points at the ends of the bar. The tank is slung between the upper and lower backbone of the frame and is a delectable confluence of rectangular sides with rounded corners. The mudguards look straight off a period bicycle and are an ode to the lineage and progression of the evolution of motorcycles. A bicycle-type main stand, which swings under the rear wheel to prop it up, is bolted onto the rear axle and a small chain cover prevents the primary chain from shredding your trousers and leg into spaghetti and mince. However, the engine crank cushion spring isn’t covered and spins a few inches away from your toes – a very comforting thought indeed!    Kicking the AJS to life is pretty much the same as the standard routine for Brit bikes of yore. First, push in the ‘Push/Pull’ fuel cock to let the fuel into the carburettor. ‘Tickle’ the carb a few times (very familiar to Jawa and Yezdi riders) and then depress the kick-start lever once gently, while pulling in the decompress lever. Retard the timing and then kick with a very steady but heavy foot while wringing in the twist-grip accelerator a little and whap-whap-whap, the bike starts with one kick. This speaks volumes about the meticulous care its caretakers have lavished on it.

Riding the AJS is an unadulterated, no frills motorcycling experience. There are no gauges to peer into, no horn, no lights and definitely not much suspension to isolate you from the road. What you see is a no-pretence, 110 per cent undiluted motorcycle; what you hear is every stroke of the engine as it gulps its fill of air and fuel and then chucks it through the elegant, chromed straight-through silencer. It seems that ‘to be left in a cloud of smoke’ was probably coined by some unlucky blokes left lagging behind an AJS H-7 whizzing past them on the motorway! The engine note is raspy and loud and lets you know that this baby means business.

The ride is stiff and although I didn’t corner the bike at a high speed (throwing around an 84-year old machine isn’t really a good idea), I can say that the handling must have been good for its day despite the skinny tyres, which would be hard-pressed even on a bicycle. The front girder fork doesn’t dampen too much and the two springs beneath the ‘Terry’ saddle prevent your rear end from becoming jelly. This is understandable, as these bikes were designed to be ridden on race tracks and not off-road to conquer continents. The handle is adjustable to suit the rider and the footrests don’t bend your legs at the knees too much. However, getting into a racing crouch is a cinch and doesn’t bust your back or your wrists; proof of the H-7’s racing origins. The bike generally went where I pointed it and that is remarkable for a rigid rear framed motorcycle of this period. Offset drum brakes up front and at the rear are pretty capable for their diminutive size, but definitely won’t stop the bike on a dime.

This motorcycle makes you feel like a control freak. Almost everything, including whistling a tune, is done by the rider. You manually advance or retard the ignition timing, you pump engine oil at regular intervals, you change gears with your right hand and of course, all this has to be done on the fly. Changing cogs in the 3-speed box is an acquired skill and goes like this: throttle down for a second, pull in the clutch lever, select the gear with your right hand and then wring in the throttle again while letting go of the clutch. The side-float ‘two-let’ racing carburettor has no idling provision and so if you keep off the throttle for too long, the bike will stall – not exactly something that would win you a race. The three slots for the ‘gate change’ gear shift lever are denoted with ‘low’ for first gear, ‘medium’ for second gear and ‘high’ for top. The gearing is slightly tall and the gears mesh effortlessly.

A clean looking 349cc engine propels this ancient speed demon, with a delivery of 3.49 bhp to the rear wheel. This seems piddly today, but back then it was jaw-dropping. The fuel is fed in and the burnt exhaust gases are spewed out through a pair of large ports regulated by overhead valves and highlift cams – technology that was light years ahead of its time in the 1920s. The valve springs and rockers are devoid of covers and the pushrods run exposed too! It’s enthralling to see the valves and pushrods in action, as the engine goes about its business. The engine cylinder and head are heavily finned for more efficient cooling – important for a machine that is to be raced at high revs for extended periods of time.    The bike was sold fitted with a standard aluminium (as opposed to cast iron) piston for a lower compression to run on petrol, but it was also supplied with a spare piston that would bump up the compression high enough to run on  racing alcohol. The engine uses a total-loss type of lubrication system, which consists of an oil tank, oil lines and a foot-operated oil pump. The pump is fitted with a transparent window, through which you check if there’s enough oil in the system. When the oil in the window seems deficient, the rider pumps the pedal of the pump that squirts it into the engine. Used oil does not get circulated back into the tank and hence the term ‘total loss’ – not very eco-friendly but who’s complaining? Acceleration is brisk, but you have to keep advancing the Lucas magneto to keep the engine from misfiring. Most of the classic bikes I have ridden have a weird kind of grinding feel when ridden, perhaps because of the employment of bushes in their engines. Bushes are cylindrical collars made of metals like bronze, within which a shaft rotates. They were used to support rotating shafts and reduce friction and were employed abundantly in early motorcycles. In this motorcycle, however, almost all the bushes were ditched for roller and ball bearings,as they are more reliable and efficient – just goes to show how purpose built this motorcycle is.

Bikes like these always have very interesting histories and this AJS H-7 is no exception. This bike was raced in the UK in the 1930’s before it made its way to Indian shores. It went through a few hands till Captain Rohinton Bappu became its present owner in 1970. However, because of his overseas job, the bike went into disuse and was entrusted to Farokhi Bengali for its restoration and care. It was brought back to its present pristine condition in a mere 45 days by ‘Chottu Bhai’, under the supervision of Bengali and the AJS Owner’s Club, UK. It even won the Best Restoration award in a recent vintage rally.

A big thank you to Captain Rohinton Bappu and Farokhi Bengali for letting us ride this exquisite machine –  you made our day.