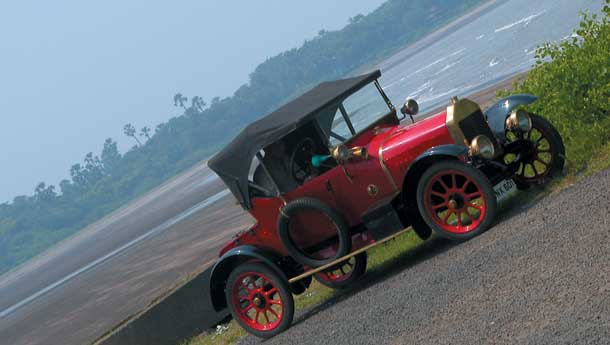 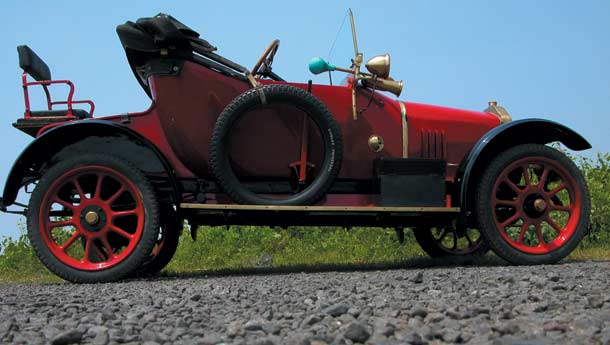 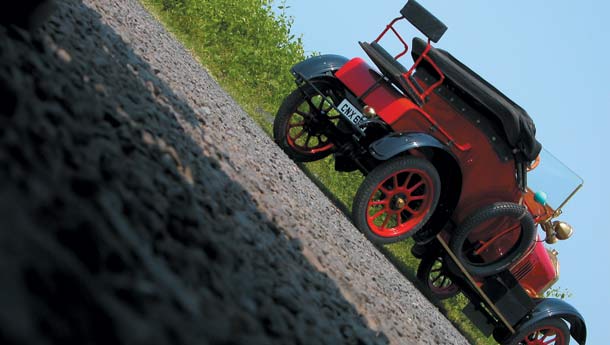 To be honest, I had never heard about Swift cars before. I would have read something somewhere that said Swift – it could even be Suzuki Swift, for all you know – but I knew zilch about the marque. I am not to be blamed however, as even the greatest repository of knowledge on this planet, google.com is familiar with only the Suzuki Swift. And what I did manage to dig up from vintage car books wasn’t terribly impressive either. So why is the 1914 Swift here?

Because it has a ‘mother-in-law seat’, that’s why. What a fascinating concept! You know what a mother-in-law seat is, don’t you? Also known as a dog seat or a dickey seat, this foldable chair is buried in the boot, and secured by leather straps. When you have to take along a third passenger – be it the hired help, a friend or better still, your mother-in-law – you just unbuckle the straps, unfold the seat and voila! a fancy new accommodation for your favourite person, who’s lovingly exposed to the elements. If not for current safety norms, I am sure the MIL seat would still be around, and it would be the most popular option while buying a car, after plastic wheel covers, of course.

Anyway, back to the Swift and its third seat. I always wanted to ride in one, so Anil Ovalekar, who takes care of the impressive Vijay Mallya collection, took over the wheel and off we went, on a jolly ride. It was, to say the least, the ride of my life, and I understood exactly why it was called the MIL seat. For support, I held on to the two leather belts on either side – I guess that’s where the word ‘seat-belts’ came from.

While the dickey seat was definitely an incentive to feature this machine, the other reason is that the Swift is quite a neat-looking compact car. With its glossy red-and-black paintwork and gleaming brasswork, it’s very attractive, to say the least. The windshield and canvas top can be folded, transforming into an open-topped tourer. There’s only one door, and that’s not on the driver’s side, thanks to the presence of the handbrake and battery box on the right. The seat is essentially a small couch borrowed from the nearest furniture maker, and along with it, the bare wooden dash seems to have come free.   To keep this light car as light as possible, the Swift Motor Company of Coventry, Warwickshire, deemed it unnecessary to fit too many instruments for the driver. Instead, what you get is an ampere gauge, temperature and oil indicators and a switch for the light. So you won’t have any idea of how fast it’s going (not that it mattered, as the Swift is really an over-optimistic name) or how much fuel is left in the tank (the car’s light enough to be pushed single-handedly). Doesn’t the instrument layout now make sense?

Imagine the pre-World War I era. If you could see in the front, why would you need lights at the back of cars? So while the Swift has four lamps at the front, the rear makes do with a cat’s eye jewel-like reflector, and the only light available is meant for the numberplate!  With a push (with your left leg) of a little button smothered under two layers of floor mats, the Swift comes to life, with an untidy clatter – somehow giving the idea that there’s more to it under the bonnet than a simple 1100 CC four-cylinder engine. So much activity, and what a racket! Developing 10 hp, the motor’s mated to a three-speed gearbox. So where’s the gear lever? Comfortably placed, between my right leg and the panel where I would ideally would like a door. And one more thing, the accelerator was where the brake should be and vice versa. So you know what a handful this car would have been to drive, and over and above that, you have your MIL at the back too.

Somehow I squeeze my right hand and shift to first. The Swift shudders and starts to move. The wooden four-spoke steering wheel is quite a handful and by the time it has moved a few metres, I had to shift to second again. The engine note changes, and accompanied by my misplaced revs caused by that tiny accelerator lever, it starts to sing like a kitchen mixie (very much like what MILs generally use – heh heh, sorry couldn’t help it).   The Swift gathers some speed and I shift to third, and hope I can now tour Mandwa in this tourer. You know what, surprisingly, with those levels of noise and drama from the engine, the vibrations are not transferred to the body. Riding on 19” rubber and artillery wheels, with leaf springs all around, the Swift is, for lack of a better word, jaunty. I associate small cars with manoeuvrability, but never, from now on. To maintain my direction, I have to keep steering continuously – my arms have become pampered by power-steered cars, I guess. And it was even worse when I had to take a U-turn. The steering wheel makes life difficult, and the turning circle... was a turning point in my life.

The engine was, however, beating along happily, and had just enough gusto to climb the uphill sections of the road. It struggles a little, but somehow pulls the car up. In fact, it was this never-say-die quality that was the hallmark of Swift cars. They were generally well-built, but simple in terms of features and looks. Swift was however not used to making powerful cars, and their speciality was making rugged runabouts like these. In fact, these light cars have won Britain’s highest awards in reliability trials, organised by the English and Irish Royal Automobile Clubs. They won for fuel efficiency and overall performance – not surprising, because these were awards for durability and steady performance, rather than going fast.

However, the life of the Swift Motor Company was short. Swift was originally a sewing machine manufacturer, and then diversified into making bicycles. So it was,er, logical to start manufacturing motor tricycles, quadricycles and then of course,cars. The production of this model, badged the 10 (to indicate the horsepower), continued with some modifications well after WWI till the demise of the company. Their overall product range was also limited, and Swift couldn’t compete with other automobile mass-producers. Eventually the firm wound up, having been in existence only from 1900 to 1931. Nice to have known you, Swift.