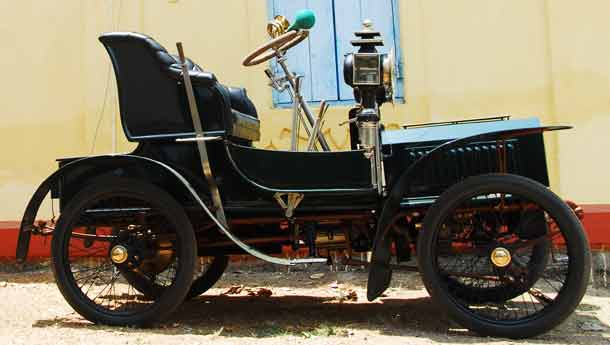 I have driven some old cars, but this one really takes the cake. It’s so rudimentary that all it needs is two horses at the front and a whip and reins in my hand – a 2 horsepower car, if you please.

The car you see here – Dr Vijay Mallya’s 1903 Humberette – is one of the oldest cars in India that can actually be driven. Driving is obviously too simple a word to explain the complexity of making it move. Oh, but you have to start it first, which is a task better left to Anil Ovalekar, whom you see in the picture next to me – Anil is the man who handles all the cars in the Mallya collection. Once it gets fired up, the Humberette for its compact dimensions, is quite a chatterbox – it’s unbelievable how a one cylinder engine can make this much of a racket. Loudly developing about 5 horsepower from a 762cc single-cylinder motor, the Humberette can chug along at a steady clip. Power is despatched by pigeon-mail to the rear wheels through a three-speed gearbox – oh, there is one lever for the three forward gears and another exclusive one for reverse. The first gear is just to move the Humberette from standstill, second is meant to move from virtually standstill to slight motion and third is from slight motion to more slight motion.

Okay, it’s not that bad. It is just that the wind-(and body-) in-the-air motoring that the little Humber provides makes it feel faster that it really is. Claimed top speed is evidently 40 kph, but I would rather wear a full-face helmet and protective motorcycling gear before attempting to check that fact out. For a century old motor, it does a good job of going chug-chug-chug. In fact, I would say its cruising speed is just right for doffing your top hat at all those pretty ladies taking the air and exchanging pleasantries with them (‘If I may be so bold to say so, madam, I can, with considerable introspection under the given circumstances, be allowed to compliment the characterfulness with which you swung that delightful parasol at my face.’)

Ah, as I was saying, it’s pretty complex because there is no give in any of the pedals. Thanks to a leather (yes!) clutch plate, the pedal moves about 3 mm (give or take a few mm) and you shift the longest gear lever in this part of the planet through the gate marked 1-2-0-3. Every shift is marked by the little Humber jumping forward a few feet like a jackrabbit. It’s not funny when you’re driving it, okay? And then there is the steering wheel. A one-spoked wonder, it is somehow directly connected to the road surface, which means it lurches violently from time to time. More than steering the Humberette, I was holding on to it for dear life. Speaking of life, it had one of its own, so to maintain a semblance of direction, you have to grip it hard. Phew. It was a gripping experience, all right. That’s not all. If you are feeling bored, there are other things to do while you are driving, like adjusting the advance-retard lever or adding some lubricating oil into the system every once in a while. This car spoils you for choice. Talk about in-car entertainment systems.

And then there are times when you have to reduce speed or stop. The brake pedal moves about 1 mm, so I don’t know whether it’s effective enough to haul that massive 20 kph down to zilch. So you use a (very) long handbrake. See that lever outside the car? That’s the one. Soon I got the hang of it, but since ergonomics and human-interface design were not exactly the Humberette’s strong points, it was quite an effort. However I will admit that using the handbrake as an anchor was quite fun, especially when the car slid sideways gently. I won’t be surprised if people practised handbrake turns with this machine back then.

Okay, the Humberette was no drift machine, but it allowed more people to get themselves an automobile. Its compact dimensions and incredible ease-of-use (I know it sounds dubious, but hey, we’re talking about a century ago) made it a cleverly engineered product, but the folks back then didn’t exactly take to it. So production of the little Humber ceased in 1908. So is it the world’s first mass produced compact car, a format that’s all the rage today? Maybe. Still, credit should go to Humber for being, er, a little too ahead of their time, about 80 years in my estimation.

Seriously, this machine, built at the dawn of motoring, has all the elements that make up a modern car – the engine is at the front, power goes to the rear wheels, a radiator does the job of cooling, there’s a proper clutch and a three-speed gearbox, it has a steering wheel, a handbrake and even a boot. Okay, it may not have cupholders or one of those fancy sunglass holders, but I am not cribbing. But the progress that has taken place in those 104 intervening years hits you only when you get down from the Humberette. My legs were wobbling after the effort involved in driving it... I could just about stand up. Seriously, now which was the last modern car that made you feel weak in the knees?