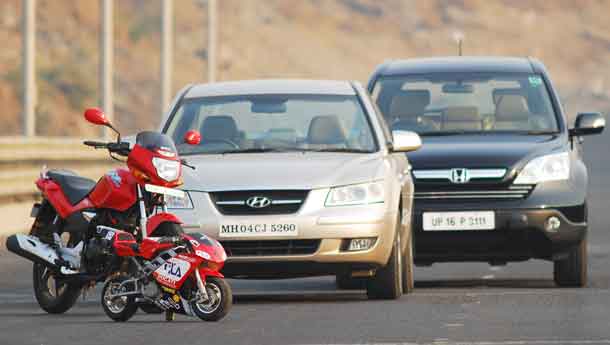 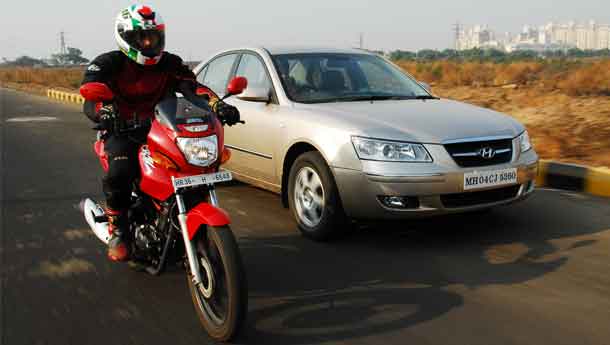 Hero Honda CBZ X-Treme
RN: That two-wheeled thing? 100 bhp to the tonne? Kid me not!
JC:  Motorcycles that accelerate to 60 kph in less than 5.3 secs pretty much cut the 100bhp/tonne mark. That means almost all premium class Indian motorcycles. Honda have always been pushing to achieve the 100 bhp/tonne and the CBZ X-Treme was closest with 102.1 bhp/tonne, and it’s one of those motorcycles with an edge on performance.

RN: Oh, so you think you can beat me with that?
JC:  Obviously not. And it’s not because I can’t, it’s because Newton and his theories won’t let me. Accelerating quicker is definitely more fun, but not when you can’t feel the wind push your helmet against your cheeks and send your nerve endings into a tizzy. And that’s exactly how the CBZX feels. And how exciting it can be if you are thrust from here to oblivion in a nanosecond in your armchair.

RN: Ha, mine’s bigger and fits all the chicks in.
JC: But does yours have rear airbags? No. Because you only get them on bikes. Have you read Sigmund Freud?   RN: Your bike thing makes such a poor sound.
JC: Bad sound, eh? Your car thinks it’s playing a part in a silent movie. And it’s evident that you haven’t heard about the CBZX’sthat are going to be on the race tracks this season. When a single is putting out an unstressed 14.4 bhp, you can’t expect it to cause a ruckus.

RN: Wanna switch to this after riding that undertyred contraption?
JC: I wouldn’t give it up for any four-wheeler that’s less exotic than a 500 bhp V12 shrouded in carbonfibre and is atleast 500 bhp/tonne.

Honda CR-V
JC: We were asked to get 100 bhp per tonne machines. What is this origami of sheet metal doing here?
RN: The CR-V is a 2.5 million unit best-seller with car-like handling in a soft-roader shell. It’s got
106.4 bhp per tonne. And it is a few gazillion ccs bigger than your table fan motor and has gizmos like ABS and AWD.

JC: How much fun can a box of metal with leather seats and an air-con be?
RN: Immense. It’s a brilliant corner carver with very little body roll. And when you roll over with those eight-inch wheels I shall clobber you with my 17-inchers. You crouch and nearly sit on your haunches while I slide into the seat, turn up the air-conditioning and zoom past you.

JC: You know what filling it up with chicks does to your weight now, don’t you?
RN: Go get yourself some chicklets to chew on. It can carry four chicks and their luggage and we can head off to Mahabaleshwar for days. You can’t carry even a chick, heck or even a toothbrush.

JC: How will you turn heads without fancy riding gear like mine. Everyone and their second wife drives one of these.
RN: The CR-V looks space age and if you haven’t bothered turning around to see it, it’s only ‘cause you are too busy trying not to fall. And those wives you talk about do 0-100 in 11 seconds with this. You don’t even do 100 kph.

JC: Do you want to try the tonne on two wheels?
RN: I don’t mind, but maybe if it were a little more comfortable.   Hyundai Sonata Embera
JC: We weren’t asked to get 100 tonne per bhp machines. What is this origami of sheet metal doing here?
RN: The Sonata Embera is a 162 bhp, 1500 kg car. Mathematically it is 100 plus bhp per tonne. It can do 0-100 kph in less than 10 seconds. And this ain’t any origami design, in fact it’s a rather understated, smart design. Your bike has too much colour in all the wrong places. Heck, those red mirrors look hideous.

JC: How much fun can a box of metal with some leather seats and an air-con be?
RN: A lot actually. For starters, the 2400cc engine is quite zippy, the gearbox a delight to snick through and the air-con chills. Those seats are so comfortable that while you sweat your way to the party, I’ll still be pristinely dressed.

JC: You know what filling it up with chicks does to your weight, now, don’t you?
RN: Not much really. You might have a head start but once I cross 80 kph, you will be left in the twin-exhaust wake. I can do 200 kph with a set of four lovely women while you struggle to push with even one chick to 110 kph. And she’d be frightened to bits at that speed.

JC: How will you turn heads without fancy riding gear like mine? Everyone and their second wife drives one of these.
RN: Hello, ever heard of a car attendant at a 5-star helping you get off the bike and parking it for you? All he’d do is tell you firmly to park that bike outside the premises. No such problems for me.

JC: Do you want to try the tonne on two wheels?
RN: Thanks, but no thanks.

Ducati 999 Replica Mini moto
RN: That two-wheeled thing? 100 bhp to the tonne? Kid me not!
JC:  This little two stroke motor makes 4.5 bhp and is still a 100 bhpto the tonne, a reason why it was our first choice for this story. At a fraction of the weight of any of the other contenders, this little beast is the best choice for a random pastime. Heck, one time I even brought one to the office and rode it on the roof top all day. It’s the perfect narcotic for blue smoke inhaling two-stroke junkies. Name another 100 bhp/tonne machine that you can carry to your desk under your arm.   RN: Oh, so you think you can beat me with that?
JC: Once again probably not, but you’re missing the point here. 80 kph and 3 inches off the ground is way cooler than 160 kph with only conditioned wind in your hair. Specific output when the vibrations are coming through the pegs, your ears are anaesthetized by the screaming exhaust and your bum numbed by ripples in the road only starts increasing exponentially with time. It’s the machine that is capable of liberating the most amount of adrenaline per cc of displacement.

RN: Ha, mine’s bigger and fits all the chicks in.
JC: You know what they say about guys who drive SUVs, right?

RN: Your bike thing makes such a bad sound.
JC: Did you even have a look at the sculpted under-seat expansion chamber? And it’s that tin sculpture that injects a dose of life into the little 50cc Aoli motor. This noise is the melody that two-stroke enthusiasts all over the world pay obeisance to all day.

RN: Wanna switch to this after riding that undertyred contraption?
JC:  Undertyred? They’ve got 6.5 inch 90/60 tubeless slicks. And the only reason why I’d switch will be to ferry the Minimoto home.