The Indian automobile industry has successfully doubled the domestic market for passenger vehicle (cars, utility vehicles and vans) and two wheelers over the past decade riding over the various challenges and years of low or no growth. India has now become the fifth biggest market for passenger vehicles and the biggest market for two wheelers, thanks to the growing population of scooters and a sustained demand for motorcycles. Over three million PVs and twenty million two wheelers are consumed locally in a year.

New players entered and some exited but the market remained firm. “It has not been a very steady growth as there were years of slump in demand due to macroeconomic issues. But people need transportation and this industry reflects the demand of the masses,” said R C Bhargava, chairman at Maruti Suzuki.


Let us begin with one of the very recent developments. General Motors, which happens to be Detroit’s biggest car maker, last year decided to pull out of the Indian market after trying to gain foothold for 22 years. The company continues to run the Indian manufacturing unit at Talegaon, near Pune, as an export base. Its Halol plant in Gujarat has been sold to Chinese auto major SAIC which is entering the country under the MG Motor brand. One may find it strange that in a year when GM decided to shut shop in India global brands such as Korea’s Kia and French auto maker Peugeot announced plans to enter the Indian market. Kia is investing over Rs 70 billion to set up its manufacturing facility in Andhra Pradesh. SAIC is pumping Rs 20 billion and could invest another Rs 30 billion.


A significant development in the last decade was the entry of French auto major Renault which set up a plant in Chennai along with its Japanese partner Nissan, in 2010. Nissan is yet to make its presence felt in the Indian market. Renault, however, managed to mark a strong presence in the country, thanks to Kwid, its small car. 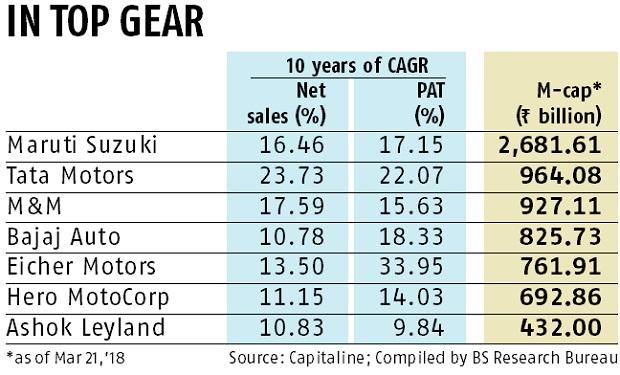 The past decade also saw the evolution of the car market. India is no longer that small car market where majority of buyers are happy with a basic entry level vehicle. Buyers are now more willing than ever to invest much more than Rs 500,000 in a car. There has also been a strong preference for sports utility vehicles (SUVs) as seen in success of models like Maruti Brezza and Hyundai Creta. SUVs were once the preserve of players like M&M and Tata Motors but now every car maker has it. The share of SUVs in passenger vehicles has reached one-fifth from less than ten per cent few years ago.

The decade also saw a lot of change in pecking order of car makers- Tata Motors lost its position as the second biggest car maker to Korean company Hyundai. Maruti Suzuki saw its market share decline during 2013/14 owing to an incident of violence at its Manesar unit but has subsequently regained it. It now holds a 50 per cent share in PVs while all the remaining players together hold 50 per cent. In fact, the only second player with a double digit market share (about 16 per cent) is Hyundai.


The growing income of buyers also led to entry to more number of luxury car makers- Volvo, JLR and Lexus in recent years. These brands have joined the likes of Mercedes Benz, BMW and Audi. The decade also saw regulatory action against diesel vehicles in cities like Delhi. This, coupled with decontrol of diesel prices, has impacted the preference for diesel cars in recent years. In cars, the share of diesel demand is now down to less than 25 per cent from over 50 per cent a few years ago. The awareness of environmental impact also led to introduction of stricter emission norms- BS-III and then IV- for vehicles. The government decided to jump the BS-V emission norms and go straight to BS-VI norms from 2020.


The government has also started nudging automakers to shift to green vehicles, including electric.  Arrival of cab aggregating platforms like Ola and Uber has changed the way people commute and these companies have also emerged as major buyers of cars from manufacturers. The domestic car industry has also seen a strong surge in export of cars from India to over hundred markets in recent years. India now exports over 700,000 cars every year. American car maker Ford is the largest exporter, followed by Hyundai and Maruti Suzuki. Export has helped a large number of players to improve capacity utilisation since their domestic sales have not seen the kind of growth they had expected.


A lot has also changed in the two-wheeler market in the past decade, leading to emergence of the country as the world’s biggest two wheeler market. Hero ended its 26 year old partnership with Japanese auto major Honda bringing an end to the Hero Honda brand in the year 2010. More than seven years into a solo ride Hero (now Hero MotoCorp) remains the biggest player in domestic market with a stronghold in motorcycles. However, its former partner Honda2Wheelers occupies the second spot and is a leader in automatic scooters which emerged as a preferred mode of travel for many in urban markets. Scooters now account for almost one-third of total two wheeler sales.


The past decade also saw entry of a number of international premium two wheeler makers such as Harley Davidson, Triumph and Ducati even though their volumes remain small.


The rising culture of leisure riding has helped expand the market for powerful motorcycles. The decade is also marked by a strong revival in the fortunes of bullet maker, Royal Enfield. Commercial vehicles have also become modern, fuel efficient and comfortable with entry of global players like Volvo, Daimler and Scania.