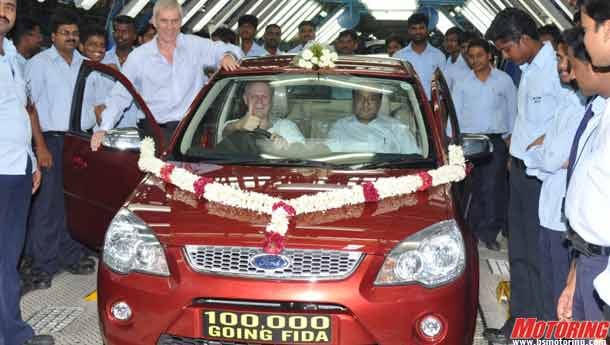 The 100,000th Fiesta was driven off the assembly line by Ford India's president and managing director Michael Boneham in the presence of executive director,  Marketing, Sales and Service, Nigel Wark; Sandip Sanyal, executive director of Operations and hundreds of Ford India employees.

''After a terrific sales record in March and April, the rolling out of the 100,000th Ford Fiesta is a truly special moment for Ford India.  The event marks a new milestone for us'', said Michael Boneham, president and managing director of Ford India.

The Ford Fiesta has been Ford’s premium-sedan in India for half a decade. The Fiesta was designed specifically for India and has been the most sought after sedan in its segment for delivering high on attributes such as drivability, styling, fuel efficiency and value for money.

Fiesta has won several accolades and awards since its roll-out in the Indian market. Powered by the TDCi common-rail technology powertrains, Fiesta has been widely recognized for its fuel efficiency and superior ride and handling.


''Ford Fiesta continues to make us feel proud and is a significant product in our portfolio. The popularity of the Fiesta testifies that more and more customers have been reassured by its quality, features and performance. The sale of the 100,000th Fiesta is testimony to our strong customer appreciation for the Fiesta,'' added Boneham.

Ford Fiesta has had great success since its launch in 2006 and it has now attained a new milestone.