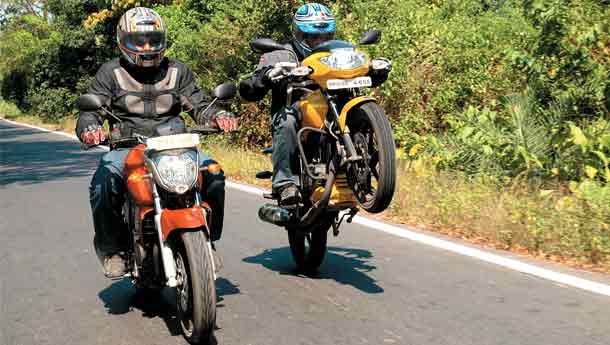 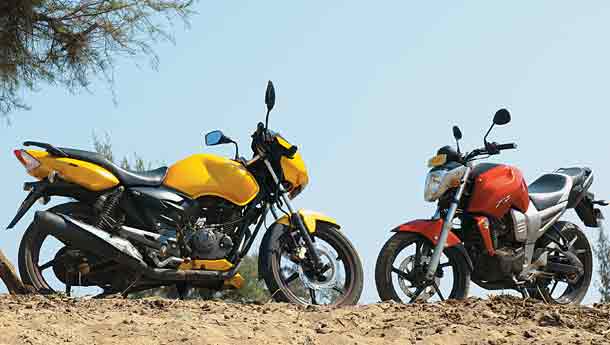 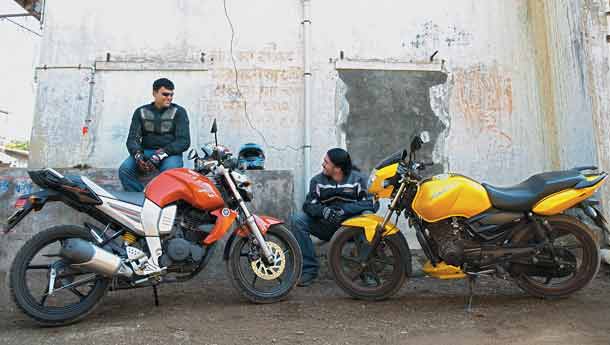 Scene one: On NH8, crouched over the FZ’s tank, tailing the RTR, 110 on the digital display in fourth gear at the redline, slotting fifth, pulling out and shooting past.
Scene two: On Bordi beach, trying to pull wheelies on the sea shore, not enough traction, less revs, sudden grip, big wheelie, rider chasing bike across sand in slow motion, bike goes down, no damage done, phew.
Lesson number one: Power-to-weight is an important concept, especially when the other guy, who’s riding the faster bike, weighs 20 kilos more than you. Lesson number two: Less revs do give you more grip on the loose stuff and you can’t afford to get surprised when it happens. Pablo’s idea of going to Bordi near Dahanu for the shoot surely turned out to be an enlightening experience, not to mention that it was brilliant fun as well.

As soon as Yamaha’s new FZ16 arrived at the BSM office, we could tell that it was looking for trouble. It went sniffing around and came upon our long term TVS Apache RTR160, the current 150cc wolverine, and blew a foghorn in its ear. Hackles raised, they circled each other, two predators of the urban jungle. In the interests of making more fur fly, we tried to make it a triple threat match, but the Bajaj Pulsar 200 shied away from the fight, tail firmly between its legs. Last we heard, it was at the gym, doubling its workout routine trying to match the FZ’s muscular body.

And what a body it is! Very much in the streetfighter mould, the FZ16 is a bonsai FZ1 from head to tail. Minimally clad and voluptuous, it grabs eyeballs like nobody’s business. The sapling-sized front forks are held by substantial triple clamps. Might look like overkill for a 150, but we’re not complaining. They look like they can take a beating and then some, which should be ideal for pulling stunts. The XXL theme continues with the tyres and that huge rear monoshock. Towards the rear, the shape tapers off, leaving the rear tyre and that chunky ‘midship’ exhaust to hog all the attention. One smart feature is the plastic dummy tank with two halves on either side. Looks good and makes for easy replacement without changing the entire tank. All in all, Yamaha have got the FZ’s proportions absolutely spot-on, which gives it loads of attitude and phenomenal head-turning ability. From the watchman to the girl in the Merc, everyone gives you... er, the bike The Second Look. Boy racers want to race you and hawkers forget their job midway through a transaction; that’s how effective the FZ’s visual treatment is, but that’s also partly the novelty factor at work. Let’s see how well it does in a few months’ time, when there are FZs at every traffic signal in the city. Wonder how it’ll look with the tank, front fender and wheels painted white with a blue stripe running down the middle. Chris Pfeiffer’s BMW replica, anyone? Fantasising aside, one particularly sweet looking detail is the Yamaha symbol on the tailpiece, where the tail lamp should’ve been. It reflects the tail lamp’s light and looks like it’s alight. Looks really cool at night (hey, that rhymes!). Also, as expected, the Yamaha is solidly built with good levels of finish. But still, there are little niggles like the tank cap, which doesn’t fit flush with the tank and the finish of the top triple clamp, which seems like it’ll get scratched in no time.   On its own, the RTR is quite the looker. Its front-endy stance, smart clip-ons, petal disc and compact dimensions do provoke a smile. But, try as it might, the RTR, even with its bright yellow, can’t overshadow the FZ’s musculature. With its smiley face, the RTR looks like Clark Kent in front of Darkseid. Who would’ve thought that someday a 150 would make the RTR look meek! Maybe the upgraded RTR with the tank extensions, in orange, would’ve stood a better chance against the FZ. One measure of how good a bike looks is whether you feel like getting onto it and riding off into the sunset, with the tacho needle knocking at the redline’s door.

Well, both bikes here do manage to do that. Our RTR too betrays no sign of the punishment it’s been through for over 3,000 km, remaining as ‘one piece’ as the day we got it. Which means all is good. Now, these bikes will be used in the city and for the occasional out of town ride, with the usual wheelies, stoppies and burn-outs thrown into the mix. Whatever the activity, these bikes need to be comfortable, right? On the FZ, you sit deep in the seat, reaching out to the wide handlebar, while your feet rest on the comfortably rear set footrests. It’s a very nice, roomy riding position, the tall flat bars making it feel more like a supermoto. The engine is velvet smooth and seamless, while the gearbox is one of the best we’ve had the pleasure of toeing. However, the mirrors don’t go with the bike’s look and are not of much use either, and this should’ve been avoided. Get on the RTR and it’s a sea-change from the FZ. You sit in a proper racing crouch that makes you wish for a race track in Mumbai. It’s great for attacking corners, not so much for long hours in the saddle and the engine is as rev happy as ever, though it’s not as smooth as the FZ’s.

The RTR is a proper cheater, while the FZ is less so. Don’t get it? Well, the RTR packs in 15.2 bhp from 159.7cc, while the Yammie makes 13.8 bhp from 153 cubes. Perhaps FZ15 would’ve been a more apt name, no? We always knew that since both weigh nearly the same, the RTR’s 15.2 bhp against the FZ’s 13.8 was going to be a no-contest. Then why do it? Because the feel you get from a bike is more important than dry numbers. The FZ’s grunty engine provides good low and mid range power and that means wheelies are no problem at all, but it does run out of breath at high rpm. While that will improve with a few thousand kilometres on the odometer, even now the FZ can sit at a smooth and composed 100 kph until it runs out of fuel. Even when the digital tachometer is at the ‘are you insane?!’ mark, the engine remains smooth and unruffled. The same goes for its ride, which continues the serene feel. The FZ rides well at all speeds and is quick to turn direction. Which is just as well, given that the road we were on had some stretches with really nasty potholes. And even if you aren’t inclined to avoid them, you remain well-insulated from every bit of shoddy roadwork that goes under the 140 section rear tyre, thanks to the beefy rear monoshock. The suspension is quite well sorted, with just the right amount of damping, which makes the FZ a confident handler. Scraping pegs around corners comes naturally to the FZ, helped by the wide and grippy tyres, and there is always a safe margin of grip in reserve, quite a bit more than any other Indian 150. The front disc provides excellent feel through the lever and there is always enough feedback from either end to know exactly when to back off. Not that we ever did, because the FZ is very stable under braking too, with the front disc shedding exactly the amount of speed you want it to, whether in a straight line or midway through a corner. All very predictable, safe and enjoyable indeed... and quite the polar opposite of the RTR.   The Apache is a ticking time bomb, a classic hooligan to the core that lives its life at the redline. Every time you get onto it, you grow horns on your head and want to let all hell loose. It’s got grunt throughout its rev range, but it really bares its fangs with a vengeance after 7000 rpm. Wheelies? You only have to think and they happen automatically. Feedback from the contact patches reaches Internet levels of information, which allows you to fine tune each and every input that you make. And then there is the lightning quick handling that feels twitchy and scary after the surefooted FZ. Quick steering it might be, but it’s far from unstable in corners by any stretch of the imagination, short wheelbase notwithstanding. Braking is as good as a giant parachute at the back and is feedback-rich, courtesy the 270 mm petal disc. Though the RTR rides well on good to medium surfaces, bad stretches do make the RTR skittish. Also, shifting your weight on the bike requires caution as the slightest movement can make the RTR wiggle around under you. One thing that’ll surely make the RTR more enjoyable is grippier tyres, even more of a necessity when you realise that the bike is happiest when it’s at the limit, where you need all the grip you can get.

At Rs 65,000 (ex-showroom, Mumbai), the FZ is more expensive than the RTR which will set you back by 59,000 one rupee coins. Quite a sizeable difference, especially considering that the RTR is the quicker and faster of the two. But the FZ comes with top quality parts and a built-to-last feel which are well worth the premium you pay for it. As of now, it seems like even a few years’ worth of hard riding won’t rattle its bones, another point in its favour. Yes, it could’ve been faster, but in the city you never really feel the need for more power. The FZ is more comfortable and smoother than the RTR and is also more than happy to go up on one wheel. Nothing fazes it and its friendly demeanour allows you to hop on and be instantly at home in the saddle. It’s made for the urban environment, where street presence and mid range power is all that you need, and it delivers superbly on both counts, all the while looking like a million bucks. With the RTR, you’ll have to make compromises, rev the living daylights out of it and only then will it be rewarding. Get it if you want to eke the maximum out of it by taming its hair trigger responses, and you’ll learn a thing or two about riding a motorcycle along the way.

In the end, both are bikes that appeal to the heart rather than to the head and both are great fun to ride. Both are made for two different purposes and yet, either will do the other’s job quite well. As you may or may not be able to tell, it’s a tough choice between the two. However, with a gun to my head, if I were to pick one of the two, it would be the RTR, an orange fuel injected one, of course.Never mind my aching back.