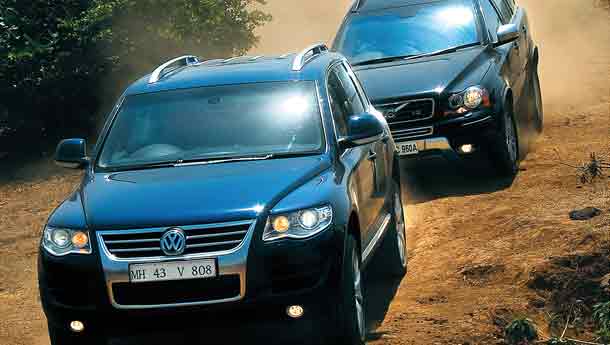 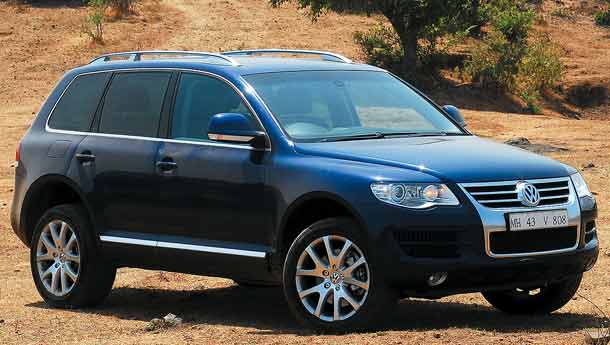 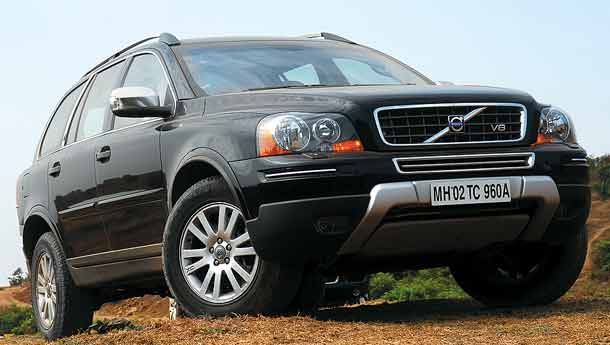 Just hope this piece doesn’t get read by some Greenpeace types. And not just the eco-warriors. When plain unleaded costs 50 bucks to the litre, machines like these are a slap on the face of the bourgeois. We took not one, but two massive European heavyweights powered by thirsty, gasoline-guzzling eight-cylinder engines and set them off against each other across the plains and valleys and highways and city streets.We revved the engines as if we were bench-testing them and went so fast that the concept of coefficient of drag became only theory; there was only drag. That translated to lots of fuel down the hatch and unaccounted-for contributions to the C02 slush fund. So much so that our credit cards melted because of the sheer number of times we ended up topping up the tanks. Why? To paraphrase somebody famous, ‘Because they were there.’ And the second reason was, Why Not?Anyway, the objective was to find out which of these SUVs to buy when you have over a half a crore of rupees just lying around (ouch, another slap!). Even if you don’t have that much money to spare, there’s no harm in knowing which is the better SUV; it makes for good pub talk, at least. So here we go.

Design
Quick. Which one looks like a proper SUV here? And which one looks like a beefed-up estate?Yes, the Touareg is more of a true-blue SUV compared to the XC90, which looks like an estate on stilts – but it’s not a bad thing, mind you. The Volkswagen is more butch and more aggressive compared to the Volvo, which is sleeker and car-like. Take off that big VW badge and replace it with the one from Zuffenhausen, and it won’t look out of place on the Touareg. That’s because there are more things in common between the Porsche Cayenne and the VW Touareg than just their German lineage. Both the SUVs were developed together in 2003, and to me, it shows in the VW’s Porsche-like fluid lines. That apart, the rich chrome surround around the grille, the slab-sided flanks, the chrome ring around the greenhouse and the funky headlamp/tail-lamp treatment all come together to make it look a premium SUV. It looks rich, all right. And between the two, it positively looks gigantic. So much so that even with 19-inch rubber, the wheel arches look empty, while the smaller 17-inch rubber on the Volvo fills up the wheel arches admirably.

Compared to the Touareg, the Volvo is more slick and smart, and looks like it is more at home in Manhattan rather than the Amazon jungle. Again, there’s nothing wrong with that considering that most SUVs never leave yaddayaddayadda. While the VW’s lines are curvaceous and soft, the Volvo is more angular and muscular, and I must say, it looks good, even after six years after its launch (expect the all-new XC90, two years down the line, to be even more butch and muscular, like the new XC60). All is well with the Volvo, except for those tall tail-lamps that bring back the automotive styling of the 90s. Between the two, it is the Volvo that comes through as more sporty and friendly.   But look at it from the prospective customer’s viewpoint. The Volvo comes through as a novel, not-usually-seen SUV, while the VW makes him look as if he’s driving/being driven around in a proper SUV, even if it comes through as the ‘poor man’s’ Cayenne. So it kind of evens out here.
Touareg: ****
XC90: ****

Interior and comfort
Reportedly, Steve Jobs (Steve who? Haven’t heard of the iPod? Which cave did you emerge from?) always wears turtle-neck T-shirts, and never normal shirts. That’s because he’s petrified of buttons (now you know why the iPod and iPhone look the way they do). Now Jobs is the kind of person who wouldn’t be seen dead in a Touareg. The insides of the entire vehicle are plastered with buttons; there are so many that it would make JFK airport’s Air Traffic Control blush with shame. And that’s before you turn on the headlamps. It’s like staring into a rather colourful Milky Way. The buttons apart, the Touareg is solidly built and feels like a house with quality furniture and fittings. The chrome-ringed instrument dials are classy, while the four-spoke steering wheel is neo-retro (hey, cool word, right?). The seats are superbly supportive and you can warm them up comfortably over long drives.

The dash of the XC90 is, however, better designed and more intuitive to use. It is much more ergonomic for the driver and the buttons are chunky and user-friendly. Quality is again not an issue over here either, with most of the elements that have gone in looking as if they are built to last several tough Swedish winters. Though Volvo says that their seats are the best in the business, I didn’t find the XC90’s seats too supportive. Life is however much better for the rear passengers, as the V8 version comes with stuff like LCD monitors with wireless earphones and stuff.

What I have an issue with both cars is the smooth wood finish on the steering wheel. Though I don’t like wood insert trim in today’s cars much (they are brilliant in classics, though), I guess the goras consider it classy. But where I draw the line is when they are used in steering wheels. When used here, they are slippery and somehow deaden the steering feel. Go hell for leather, please!
Touareg: ****
XC90: ****

Powertrain and performance
The crux of the matter: awesome V8 power. There’s something about V8s, as I have often said. And as luck would have it, I have had the chance to drive classic V8s to state-of-the-art ones. The car’s age notwithstanding, you emerge after driving a V8 with a wide grin plastered on your face. That’s because V8 motors have that extra edge that V6s cannot provide – they are not as highly strung as V6s are and have an abundance of power across the rev range. Okay, V12s are in another league altogether, so that makes V8s that much more accessible.

The Touareg’s V8 powerplant displaces 4163cc to develop over 300 bhp at 6800 revs and 44.86 kgm of torque at 3500 revs. This four-valves-per-cylinder engine also comes with a higher output (about 50 bhp more) and is used in several Audis. A six-speed automatic shifts power to all four wheels permanently. The Volvo’s motor – as everybody who’s read last issue’s BSM or even the Jan issue (XC90 V8 road test) knows – is an engine that’s been designed by Yamaha and is mounted transversely. Why? You missed reading those issues, didn’t you? Anyway, I am not telling now. The 4418cc is more powerful in horsepower terms, at 315 bhp at 5850 revs, while torque is identical to the VW V8, but comes in at a higher 3950 rpm. This too sends power to all four wheels via a six-speed automatic.

Description is fine, but you should look at the figures. The Volvo simply thrashes the VW in the overall performance stakes. It is quick and frighteningly fast across the board. The reason is pretty simple, and it’s not just that extra ten horses. The Volvo has a mighty weight advantage; it’s a whopping 200 kilos lighter than the VW, and simply seals the matter here.


Touareg: ***
XC90: ****   Ride and handling
Both the machines come with permanent all-wheel drive, and thank God for that considering the motive power on offer. But there is a difference. On normal roads, in the XC90, about 95 per cent of the power is transferred to the front wheels, while it is 50:50 in the VW. When conditions get bad, in the Volvo, up to 50 per cent is sent to the rear wheels, while in the Touareg, it can transfer almost 100 per cent. Besides that, the Touareg comes with low- and high-range settings as well as lockable centre and rear differential. Not just that. As an option, you can get air suspension with ride height control as well. Which means that if you are planning some off-roading, you know which SUV you should be taking.

What benefits the Volvo is its car-like dynamics, which are more forgiving for most people. The car’s dynamics are tuned to making your drive safer than anything else. In other words, the four-wheel drive system is more of a safety feature than a capability feature. Consequently, the Volvo is more of an entertaining car around the curves rather than the hefty VW, it is thrilling to drive... well, as much as a powerful SUV can get. Still, the Touareg is much more planted; those Pirelli PZeroes really stick and nothing can ruffle its feathers. It is this invincibility about it that I loved the most.

Both SUVs ride well across diverse terrain. On good roads, the VW and Volvo are well matched, with the VW offering a more luxurious, comfy ride. When you go off the road, the XC90 is not that grippy and you’ll soon have passenger reaching for the nearest grab handles. As I said earlier, in such conditions, the VW comes through as a nimble mountain goat that belies its size, a fat, well-fed mountain goat, if you please.
Touareg: ****
XC90: ***

Verdict
Aargh, here comes the difficult part. It is not easy to come to an outright winner-loser here. Not that I am taking the easy way out, it’s just that I really liked both the machines here, each for its own strengths. I like the Volvo for its looks, its car-like on-road behaviour and its refined V8. And I like the Touareg for its no-nonsense image, immense off-road ability, and its, er, nasty V8.

So if I had that sort of money, which one will I put it down on? Sigh. Here we go. The Volvo seems to be sensible, green and appeals to all the warm human emotions. So to me, it has to be the Touareg simply because it seems more offensive to the eco-weenies than the Volvo!