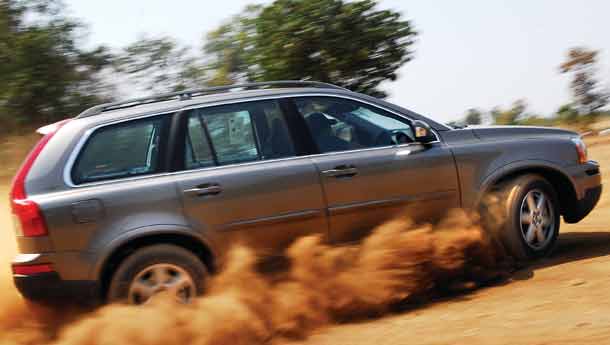 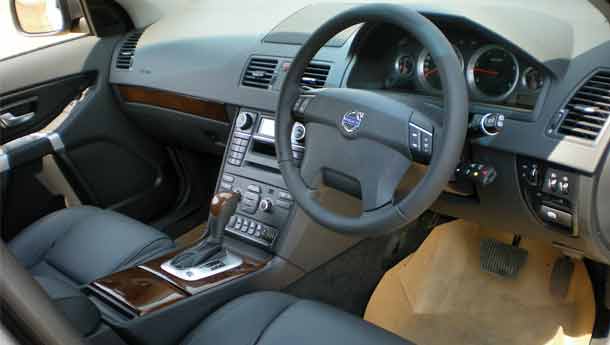 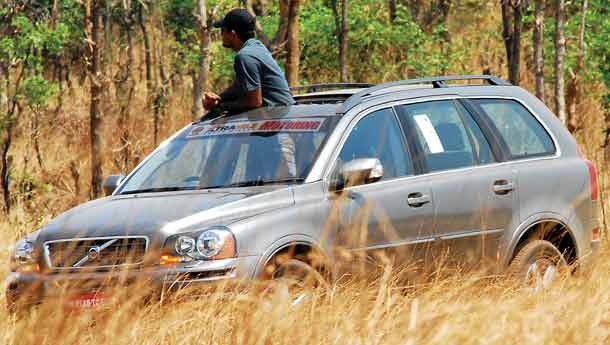 Srini is BSM’s music guru. I’m not. But I can say with full confidence that I’ve never heard Husan – the peppy dance number by Bhangra Knights vs Husan – played back this impressively. I think they call it, tight, resolved bass, clear mids and sparkling highs. I nearly parked the Volvo XC90 D5 by the side of the road so I could tune into the song. The music system in the XC90, a six-CD changer job, is so good that after a long time I looked forward to listening to music in a car as the sole goal of the drive. Yes, I do realise I’ve to write about the other 2,225 kilos of the Volvo also, so let me get to heart of the matter.

It fell to me to test the Volvo XC90, and since I’ve always thought the XC was one of the better looking SUVs on the planet, I was rather looking forward to it. All the more because Srini raved on and on about the XC90 V8 that he got to test. Somehow, the sleek, almost car-like lines work for the XC. It doesn’t look like a crossover, but it deftly sidesteps the visual bulk we normally associate with a full-size SUV. That the XC90 is pretty large is inescapable. It’s the first car that refused to fit into my parking lot at home. I moved both the long-term scooters and the RTR out of the way, and still, half a foot of the handsome rear end of the XC90 stuck out defiantly.

Fortunately, that bulk does translate into space inside. The XC90 is lavish in a very subtle sort of way. The Indian XC90 is a genuine five-seater, a fact that I like very much. Let us face it, no matter how many seats you cram into a car, the largest chunk of trips will feature one or two people, maximum. Plus chauffeur, if you’re that sort. A seven-seater van sounds right. A seven-seater SUV, to me, does not. Two rows are all you get. The two seats up front, and especially the driver’s seat, are thrones. While the passenger still has to manually adjust his seat, your fingertips and a hint of pressure will cause your throne to mould itself into any shape you like, short of a pretzel. Three of the contortions, the driver’s seat will memorise and return to. The rear row also has two big seats and a spacious middle seat that can take a third adult when needed.
And then there is the boot. There is the full size spare that takes a major bite out of the space, but Volvo India has kept it there to meet our country’s legislation. But since the space saver spare is under the boards, you just need to dump the big one at home, et voila. But seriously, behind the second row is a space the size of a small cave, or a treehouse, if you will. If you run out of boot space with a boot this large, it’s you (and not the car) that is doing something wrong.   Upshot? This is a large car with lots of space inside. Just a word more on the interiors. The theme is black plastic with some wood inserts. I, for one, don’t mind the black expanse one bit. It looks functional-classy and just a bit understated.

If you peer closely you will notice that the buttons are all pretty large. Srini tells me that’s by design – Volvos come from and are driven in cold places; the buttons are large so that fur-gloved fingers have a good shot at pressing the right ones. And all the usual ones (outside mirror folding, AC controls et al) aside, there’s quite a few to press. My personal favourite was a close run thing between the seat adjustments and the parking assistance. The former was very useful – I’d lower the seat almost to the floor for open road cruising, and then raise it till my hair practically touched the roof in traffic. In this position, you can see the corners of the car clearly. The parking assistance button was used mostly to switch it off. In India, there is always something too close to the car and the beep warnings – indispensable when parking the XC – get on your nerves after a while. Thankfully, the XC90 D5’s parking assist only looks behind.

And yes, I don’t like the position of the sound system controls or the cruise control on the steering. While driving, I’ve forwarded and backwarded too many tracks by mistake, and switched on and off cruise controls too many times. Love the steering wheel, though.Turning the XC90’s steering wheel itself is a pleasant experience. The car isn’t sporty like a BMW X5 or as isolating as the ML. It sits bang in the middle. You do get some feedback from the steering wheel, and it’s just enough for you to not really criticise it as inert. On one downhill road, the XC90 genuinely impressed with the ability to go plenty fast without requiring you to totally focus on going fast.

Effortless is pretty much how the Haldex all-wheel drive system can also be described. Most of the time, you don’t actually notice it, but when the corners come up, the XC90 goes around them flat, like a sporty car would. There isn’t much body roll, no dramatics and no fuss. At all speeds from zzz to yeehaa, corners are handled with a straight-faced grace that belies its size. Tyres may squeal, but the XC90 will not be deflected from its line by crests, potholes, dust or over-enthusiastic jockeying. It’s a solid, safe, thoroughly likeable handling package.

And that handling is backed up by a superb ride quality setup as well, which nearly doubles the fun. Again, the XC90 strikes an admirable balance between sporty and cushy and comes through with flying colours.On one narrow mountain road, multiple overtakes on ST buses required two wheels in the dirt. And not always flat dirt either. The XC never even noticed this. It just went through it. I heard thuds which usually meant that the irregularities just got pulverised, and that was that. On those narrow roads, Pablo, who was in a Swift diesel (smaller, more nimble and also a good ride quality package) was having trouble keeping up with the XC’s torrid pace (Actually, that was due mostly to the enormous cloud of dust you would raise in the process -Pablo). That should tell you something.   One of the reasons why Pablo was having all of that trouble, of course, was the stuff that lies under the hood. 185 bhp isn’t all that much power, but when it’s backed up by nearly 41 kgm of torque, it isn’t found lacking either. The engine in the XC90 D5 is a pretty straightforward job. Unlike the delish V8 that Srini got to play with, this thing has a humbler 2400cc inline-five turbodiesel, mounted transversely, of course. The relevant end is bolted to a six-speed automatic, and the aforementioned Haldex jobbie transmits power to all four wheels all the time.

The automatic, by itself, isn’t special at all. Shifts aren’t sporty quick, or ultra-slow, they’re just, um, shifts. Single kickdowns come with some lag, but you get used to it and simply kickdown earlier. Double kickdowns seem to confuse the gearbox somewhat and take noticeably longer. This is where the 41 kgm comes into play. I concluded, after an hour of driving, that a double kickdown on the XC90 is as pointless as fried onion rings served with ice cream. All you needed was a single kickdown and whoosh!Okay, maybe not whoosh, but you get the picture. The XC90 is a hefty piece of kit and the engine, despite that, acquits itself rather well. Standing start acceleration isn’t slow by any means, but it won’t turn heads. On the other hand, the lofty and flat torque curve endows the XC with superb in-gear acceleration figures. Anything that can move 2,225 kg of stuff from 100 kph to 140 kph in 10-odd seconds cannot be called slow, right? An explanatory note is needed here. You will notice that in the test sheets, the BMW X5 actually appears to be 0.1 seconds slower than the XC90 to 60 kph. That isn’t the case. You see, our enthusiastic tester decided to match the X5’s performance with the smaller engine-d XC, instead of just logging it. So he stood on the brakes, lofted the revs and launched the Volvo. And came up with a 5.1 second run to 60 kph. We were cheeky enough to try that on the X5, too, of course. And you’ll be happy to know that the X5 will swoop to 60 kph in just 3.8 seconds when you play naughty. That makes the XC roughly 1.3 seconds slower than the BMW. The point is that the 2400cc i-5 turbodiesel might seem small, but it punches well above its weight. Besides which, it is a pretty quiet unit, and reasonably frugal for a car this large, and of course, it burns the cheaper fuel.

In short, I deeply liked the XC90. It doesn’t lean heavily towards one end of the SUV spectrum, and what it does, it does really well. And I think that’s the key to this car. If you aren’t all starry-eyed about having a big brand at the pointy end of your bonnet, the XC90 is the pragmatic luxury SUV purchase. It’s a Volvo. That means good, solid engineering. That means extremely safety conscious design. The XC has very likeable, if not sporty handling, and tremendous ride quality, very nearly the best in class. It is spacious inside and the cabin is an extremely friendly, intuitive place to be in. And finally, there is that gob-smackingly great music system.

All that goodness is yours for just over Rs 47 lakh. Here’s the thing; a similarly spec-ed BMW X5 will cost you Rs 21 lakh more. Let me re-phrase that. In most half-decent towns in India, you could buy a Volvo XC90 D5 and a reasonably spacious apartment for the same money as you’d pay for a base X5. Do I even need to say more?