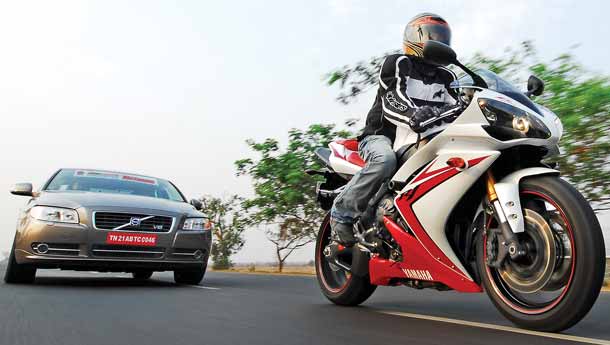 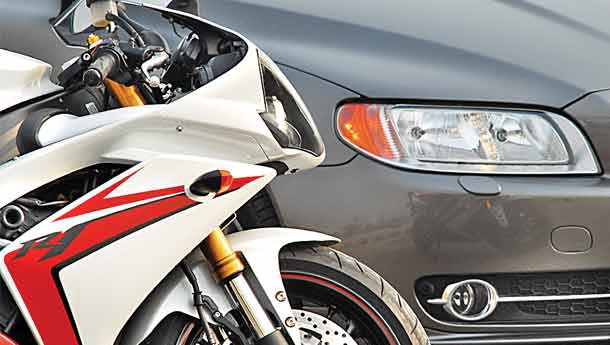 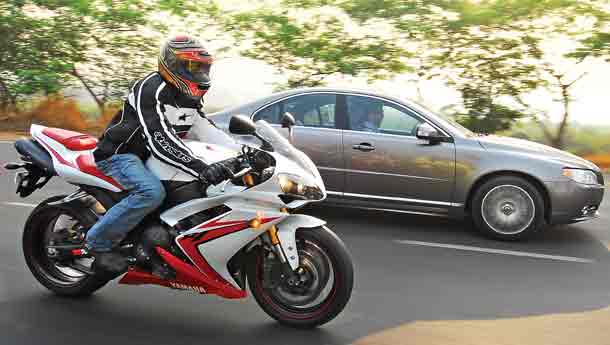 In just over 7.5 seconds, the Volvo S80 V8 has crossed 100 kph. That’s the kind of time that most six-cylinder cars of similar order can only dream of. But then in the same time, the Volvo S80 V8 is still hundreds of metres behind and becoming a speck in the mirrors of the Yamaha R1, that is now past 200 kph and looking to hit 300. It doesn’t make sense to have the R1 here; after all, with a power to weight ratio of 1000 bhp/tonne, it makes the S80 V8’s 164 bhp/tonne appear silly, (so why, then, have we compared the two? It’s not a comparison actually, but in typical BSM tradition, we decided to bring the two to gether to establish the Yamaha connection.

There’s no need to ring alarm bells just yet, because the S80, with its 4400cc V8, is one helluva fast executive sedan. But it’s not something I always believed. Back in Sweden, I’d found the S80 too soft and lacking drama, and that’s all because the last V8 I’d driven was the Audi RS4, the crazily quick four-door. But, with time also comes common sense and maturity. When I drove the S80 here, in isolation and in anger, it responded with such a mix of fluidity and ferocity that I started to appreciate the finer things in life. Such as this Yamaha V8. Rameez, the kid you see riding the bike in the pictures, is just 19 years old and as you’ve realised, one lucky bloke.

Ostensibly, Volvo were far too busy conjuring up new engines for the S80 and XC90, to a point where they had no time to build their own V8. Volvo had to have a transverse V8, so anything from Ford or Jaguar-Land Rover could not be used. So they handed over the job to Yamaha. Now, Yamaha were not new to the idea of building car engines (see box), but they developed an engine that overwhelmed the slow, lethargic gearbox. For all its quick revving capability, Yamaha forgot to add the one detail that entices anybody who wants to pilot a V8 – a throaty growl. The marketing and R&D boffins quickly remedied the situation, and the end result is nothing short of a masterstroke.   It was the market, in fact, that cried hoarse and demanded a V8 for the XC90, in the face of the Porsche Cayenne and the BMW X5, back in 2005. It was also Volvo’s first V8 in its 70-year odd history, and they slipped it in so quietly that Yamaha thought it prudent to spend more time on the NVH of the engine. After all, Volvo is the equivalent of yoga in a world where lifting weights and delivering a lethal ninja kick constitutes a workout, so a V8 would have meant to be the ultimate sacrilege, like power yoga. In 2006, when Volvo unveiled its second generation S80, they allowed the V8 to settle tightly in the confines of the engine bay. It’s an uncharacteristically narrow 60 degree block, developed to keep the ones in the most important wing of the company, the vehicle safety department happy.

On the inside, there is a tasteful blend of faux wood and leather. But for something this sporty, I can’t appreciate the wood treatment on the steering wheel. And where are all those damper setting buttons that made the car such a true blue hooligan? Volvo seems to have skimped on certain details, some that are more required than others. The stereo system here felt tinny, too treble heavy and not something our dear friends north of New Delhi would appreciate. The seats, though, are fab, with support in all the right places. Even the rear seat passengers never complained of a lack of legroom, and shoulder room is just about acceptable. But does it really matter?Not for someone like Rameez, for whom the only eye candy are the dials and comfort means figuring out the right riding, peg and leg position. On the R1, ear tearing performance is a given, and so is the exhaust yowl and blinding turn of speed. That’s also thanks to the 185 bhp that powers the light bike. That’s the kind of performance reserved in the car world for kit cars. Or the Caparo T1. But the Volvo S80 is quick too, if not hair-raisingly so.

On the test track, it’s easy to try to raise the revs, stand on the brakes, then release your left foot off the brake and gun the car forward. The tachometer needle barely raises, and it’s only then that you start to realise that the four-wheel drive system is a sterilising device. The car doesn’t hesitate as it lunges forward, the six-speed gearbox finally meeting its match in the 4400cc V8. It’s not brutal, but before you can blink your eye the car is covering ground rather rapidly. A bit isolated, but the intake roar just gets gruff and the decibel counter starts to rise. The sound is fabulous, one where the crescendo by the cylinders reaches a point where you feel sorry for all those who’ve bought German sedans with V6s or inline sixes. Of course, one needs to get a check on reality and the R1 will leave the S80 V8 standing, at any speed, even passing speeds. Even though the R1 will hit 300 kph on the counter, the S80 won’t disappoint, taking just around a minute to reach 240 kph, after which aerodynamics and physics act like the Berlin Wall.

Straight line performance for the S80 is brilliant, when placed against comparative four-wheeled rivals. On course to a set of twisties, the Volvo acquits itself well, but it starts to appear that the V8 was an afterthought in a car like this. Steering feel is not the issue – it’s present in dollops, but the narrow V8 has meant a higher centre of gravity for the engine and an inherent nose heaviness. Around sweeping bends, where one tends to just shed some speed entering the corner and power through on the way out, the car starts to understeer and one needs to cut down more speed than expected. The 50:50 torque split through the permanent all-wheel drive compounds matters, and that missing damper setting buttons starts to tell. It seems that the suspension has been set to a permanent comfort mode setting, one that allows for more roll than anticipated. The higher kerb weight also plays havoc with the overall dynamic ability, making it appear porky in comparison to a BMW 530i. Grip is not the problem here, and under braking the car stops instantaneously, providing enough pedal feedback. It’s just that the car seems a bit overwhelmed by all that power, neutral to an extent but not very involving.   It’s not very involving looking either, a bit of Steve Mattin magic and some Swedish tapestry. The overall design is angular, appearing just like a fast clipper boat, with some muscular edges. Everything is subtle, even down to the design on the alloy wheels, the shoulder line and the headlamps. A bit too underplayed, something that little brute of an engine  hides underneath.In today’s world, the S80 V8 is a true sleeper, one that doesn’t brazenly sport four exhaust tail ends, wider wheel arches and a deep front air-dam. It is like that bright boy in school, who aces his class and adds trophies to the principal’s case but gets away with pulling up girls skirts because he can do no wrong; it’s perfectly accomplished with a hint of devilry. I can only imagine the scene in 2012, when manufacturers queue up outside the EU commissioner’s office in Brussels, discussing the range of engines that need to be axed that don’t help meet the 130 g/km C02 average. When it’s Volvo’s turn, the commissioner might simply shrug his shoulders out of pity and say, ‘Well, since Volvo have done so much to help save lives and the environment, we’ll let you keep the V8.’ Yet another hardnosed guy who might fall for the charms of the Yamaha engined Volvo, methinks.