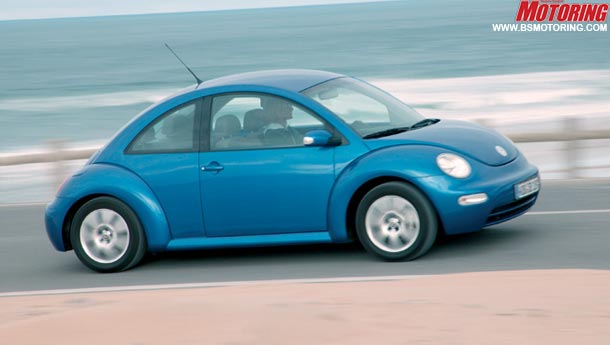 Going by the initial demand, Volkswagen India hopes to sell over 300 Beetles next year. The bug shaped popular car was launched in India in the first week of December.

"There are already over 170 advance bookings across India, and we have started delivering the cars as well. Going by the initial euphoria, we expect to sell around 300 Beetles in 2010," said Raj Sawant, business head of Automark Motors, Volkswagen dealer in Ahmedabad.

"We are now getting shipments of 40 cars in a batch. One batch has already landed while the second one is expected soon," he added. The car is brought into the country as a completely built unit(CBU) attracting a duty over of over 100 per cent.

The Beetle comes in a single 2-litre petrol variant with a 6-speed automatic transmission and is priced at Rs 20.90 lakh ex-showroom in Ahmedabad. Explaining the enthusiastic response to the Beetle, Garima Mishra, Dealer Principal, Volkswagen Ahmedabad, said "Its distinctive design makes it easily recognizable, which can be an effective brand-building feature. People's fascination for this bug shaped car has made Beetle one of the world's most popular cars across decades."

In comparison, the Fiat 500, priced at Rs 15 lakh, has sold over 62 units since its launch 17 months back. The company today also launched the sports utility vehicle Touareg in Ahmedabad, at a price of Rs 53 lakh ex-showroom. The SUV, which was earlier available in the country only on order, will now be stocked here, making its delivery time much shorter.

The German carmaker has, in the meanwhile, started the production of its small car Polo in India in its Chakan plant near Pune recently.

The five-seater hatchback is likely to be positioned in the B+segment, including Hyundai’s i20, Maruti’s Swift and Chevrolet’s Beat.

With its slew of new launches, the company hopes to increase its market share in India to 10 per cent by the year 2015.