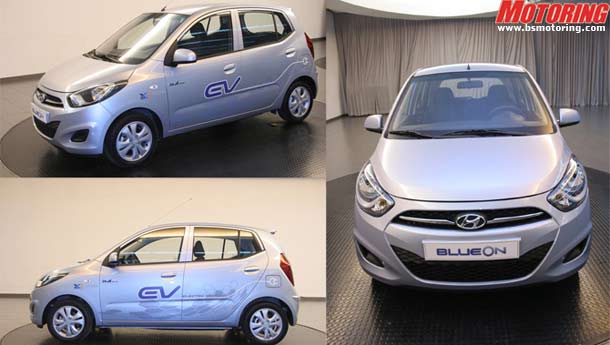 Hyundai Motor, South Korea's No.1 carmaker, unveiled its first pure electric car on Thursday, with a goal of commencing mass production of the vehicles in 2012.

The "BlueOn," based on its i10 hatchback, will be powered by batteries made by SK Energy with a capacity of 16.4 kilowatts per hour, Hyundai said in a statement, without disclosing prices for the vehicle.

The BlueOn can run 140 kilometres on a single charge and features a maximum speed of 130 kilometres per hour, it said.

Hyundai will produce and supply a small number of electric vehicles to government agencies this year and next before commencing sales to the general public in 2012, by which it plans to manufacture 2,500 units, Hyundai said.

Hyundai said it was early too say in which markets the BlueOn would be launched first.

"We are taking a baby step. There is no infrastructure such as charging stations in Korea and many other countries," a spokesperson said.

There are a number of electric vehicles in the works by other automakers, but their high cost and the limited range are cited as the biggest hurdles for their widespread adoption.

Japan's Mitsubishi Motors Corp was the first major carmaker to roll out pure electric cars. Its i-MiEV electric car was introduced in Japan in August.

Nissan Motor Co plans to introduce a mass-market electric car in the United States in December. Ford will have an all-electric version of its Focus available in late 2011.

The government said on Thursday that South Korea plans replace 20 per cent of the country's passenger cars with electric vehicles by 2020 with a goal to lead the emerging market.