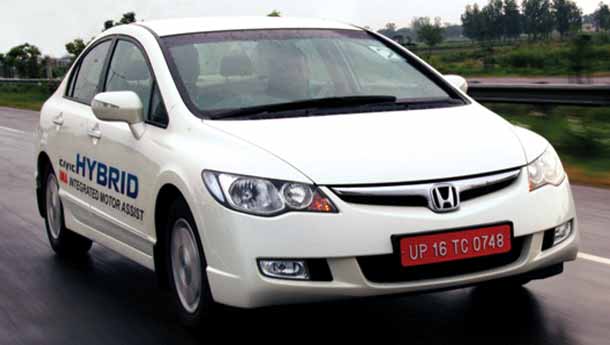 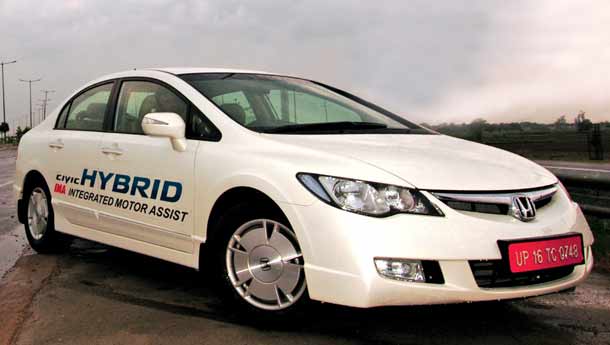 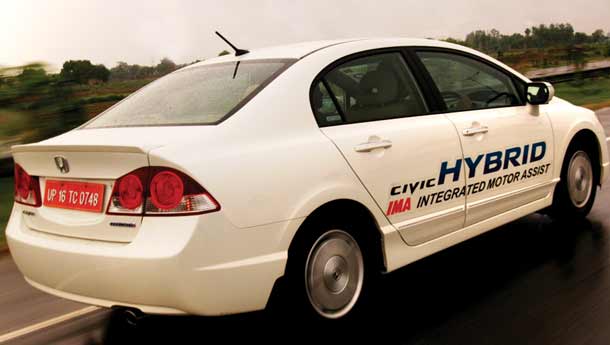 Yes, these are troubled times. Fumes are killing polar bears and oil is getting rarer to find than an impoverished sheikh. And the automotive industry is getting a huge amount of flak for such things coming to pass. Now they are making amends by introducing hybrid cars. While hybrid cars may not be the complete solution for a green planet (as they use IC engines), they are at least a step in the right direction.As expected, these machines are pretty sophisticated, and even a few years back, no one would have believed that we would have hybrid cars on our roads (though God knows they strike the right chord with our ‘average’ mentality!). But here we were, Aman and I, in a proper hybrid car on the Delhi-Noida Expressway, coming to terms with how different this car is and how it has a cleaner conscience. The car, of course, is the Civic Hybrid... really, hats off to Honda for being the first carmaker to introduce this category to India.

Except for the ‘Integrated Motor Assist’ emblazoned on the left rear quarter glass and a ‘Hybrid’ badge on the top right section of the boot, you wouldn’t be able to make out the difference between this Civic and a regular one. Okay, the wheels on the Hybrid are flatter because they produce less drag, but you wouldn’t be able to make that out very easily. It just struck me that since this car belongs to a whole new technological concept and ideology – besides costing a lot more – Honda could perhaps give the Hybrid a stronger identity for our roads.

The interiors too are very similar to the Civic 1.8, except of course for the instrument cluster. Now I realise why the regular Civic’s dash has digital displays and futuristic looks – it’s because they had a hybrid version in mind all the time! So, at the touch of a button, the temperature gauge switches to a mileage gauge; this gauge displays a reading from 0 to 50 and gives you an instant readout of the current fuel consumption of the car. Another eight-stepped bar at the bottom left of the cluster displays the charging condition of the electric motor’s battery. Adjoining this is an amp-meter that has ‘ASST’ at the top and ‘CHARGE’ below with a line in the centre, which signifies a zero charge-discharge condition. Another addition to the Hybrid’s instrumentation is an AUTO STOP light that glows when the engine is shut off and the motor is running when the car is at a standstill.    Complicated? Yes, somewhat. Because we were trying to test the fuel efficiency figures, the eyes constantly moved from the odometer to the battery charge to IMA and back to the speed. And did I mention that you need to look at the road also in between all this? It does take some time to get a hang of, but once you do, it’s all hunky-dory. Over to Aman, then.It’s good that Kyle is an automotive engineer and he knows exactly what’s going on under that bonnet. When I got into the driver’s seat, all I knew was that this was a 109 bhp vehicle (with both IC and electric motors humming) with a total of 22.9 kgm of maximum torque, and I just wanted to find out how it felt to drive.

Since Honda had organised the Hybrid drive as a kind of mileage run, getting a top mileage figure was priority. In order to do that, we had to keep a constant speed of approximately 35-40 kph, with the tacho figures shuttling between 1100 and 1300 rpm. Simple? No way! I was finding it difficult to curb that urge to step on the pedal. Beyond a point, specifically the broad, flat, six-lane Greater Noida highway, I simply couldn’t resist enjoying the Civic for what it is – a brilliant, driver-centric car. I just love the steering wheel of the Civic and the driving position. But as far as the driving experience of the Hybrid goes, how different is it?

Much to the amazement of the Honda employee who was with us in the car, I finally gave in and gave the Hybrid the stick... fuel consumption be damned! Compared to the Civic 1.8 automatic, the Hybrid is heavier by 50 kilos. This is not much, as the new-gen battery in the Hybrid is now more powerful, yet lighter. The battery, combined with the 93 bhp 1300cc four-cylinder engine, makes the Hybrid quite peppy to drive... though you wouldn’t know it! Well, the Hybrid is a fast car all right, but it can’t be compared to its 134 bhp IC-engined sibling, which hits the right notes. This one is silent and it is devoid of any sensation of a power-generating unit, but there’s no arguing with the digits on the speedometer. Even when you stomp on the pedal and the digits rapidly climb, there is no surge of acceleration. It is so smooth, it’s almost unreal. But the 140 kph that showed up on the display was very much real.    Before getting on to the highway, we had to make our way through Delhi traffic in the Civic Hybrid. Even under these conditions, it is pretty easy to drive and the switchover between the IC engine and the battery is so seamless that you don’t really have to think about it much. Adding to the spooky sensation was the gearbox. The Civic Hybrid’s gearbox uses continuously variable transmission (CVT) technology, which means you can’t hear the gears shift, and since it’s continuous, the rpm doesn’t drop either. So just keep accelerating your way between other road users smoothly. Of course, the car has regenerative braking, which means energy ‘wasted’ in braking is employed to charge the battery. So while the brakes feel normal, in stop-go traffic, they’re pretty much keeping the batteries full-on with juice.

I bombarded Kyle with questions about the entire concept of hybrids. He explained how the electric motor starts working at low speeds, how kinetic energy is released every time you touch the brakes, how it’s all eco-friendly and all that. But since everything went over my head, he’s put all that in a box accompanying this piece. But the true test of the Civic Hybrid came through at the end of our run. Despite me driving the car flat-out as if it was a normal Civic, and barely glancing at the fuel consumption figures, we got a figure of 16.1 km to the litre. Now imagine if you had a light right foot. Okay, we didn’t exactly win the mileage run, but the point is that we had fun. Yes, it’s possible in a hybrid!