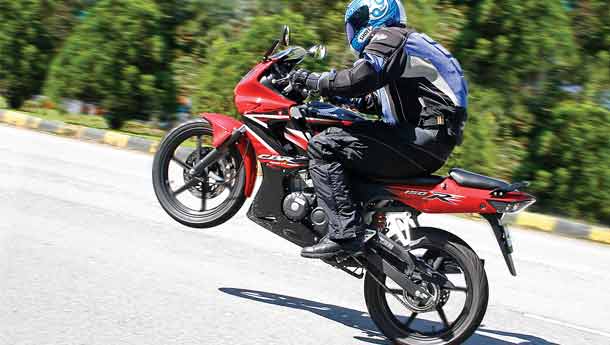 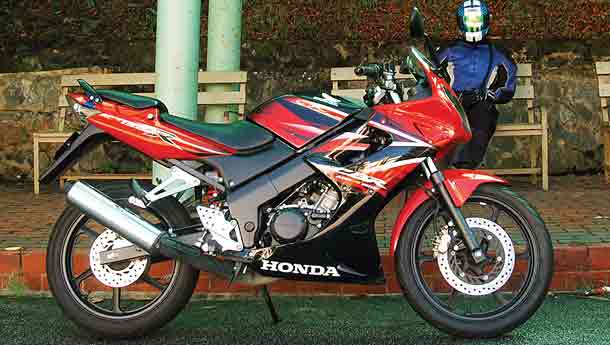 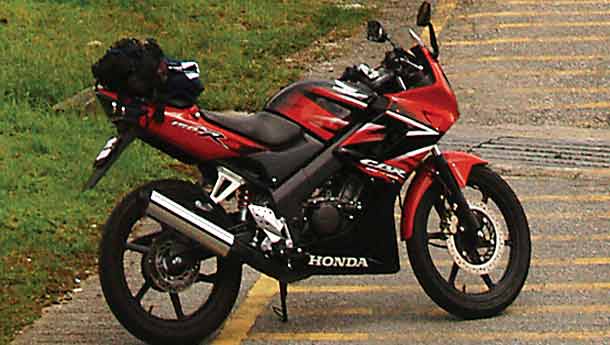 Mohammed Izzuddin Kamaruddin is 36 years old, has three kids and lives in Kuala Lumpur. He works for a sports magazine called Mingguan Sukan and has been asked to guide me for the day. He’s on the blue Honda CBR150R and I’m on the red one that’s trying very hard to follow him. A slim man with an unassuming manner and halting English, he’s currently rocketing through traffic at an eye-wateringly rapid pace. I can hear the throaty roar of his water-cooled single-cylinder 150cc Honda over mine and while he can’t see it, I have a half-smile on my face.

You see, his riding is blowing to bits all my preconceptions about riding in Malaysia. Here I was thinking that such great roads, so well-signed and so well-lit, could only be populated by sober, almost European-type drivers and riders, who go perfectly by the book. And my guide, at the moment, is calmly zipping past cabs, sticking his knee out to brush their paintwork as he passes by. He ducks easily into miniscule gaps and now and then (thankfully), looks over his shoulder to check on me.

It’s a phenomenal pace, and in the process of following him, I manage to pull two fairly lurid monos from two successful traffic lights. Don’t get the impression that either was unprovoked, but I am in a foreign country and the idea that cops are about to catch me is scaring me. So I pull up next to him at the next traffic light and ask him, ‘Er... Izzuddin, two wheelies happened.... cop trouble?’ His smile sets me at ease, ‘Big ones?’ he asks hopefully. I nod an embarrassed yes. He says, ‘You do whatever you want. No problem. Wheelie? Ok. Stoppie? Ok. Speed? Ok. Only crash not ok. If you fall, they catch you.’ That’s really good to know, then.    You see, the Honda CBR150R is a pretty intriguing motorcycle to be on in many ways. The engine is a 149.4cc single-cylinder unit, but is tuned for power, makes almost 19 bhp, and sports water-cooling, four-valves and a double overhead cam setup. The motorcycle was built to replace the two-stroke NSR 150. As such, it features fairly high compression at 11:1 and an extremely rev-happy engine – peak torque is 1.35 kgm – but it comes at 8500 rpm, when most Indian 150s are hitting their far-lower power peaks. The CBR still uses a carburettor, though, but given the smooth power delivery on the bikes we were riding, the crispness is probably the sole improvement you would get with fuel injection. The engine uses a 6-speed gearbox, a massive-looking spar frame, light alloy wheels and thin tubeless 17-inch tyres to great effect – as I was soon going to find out. What makes the motorcycle really peppy is its superlight weight. The dry weight is just 116 kg, a full 30 kg lighter than most of our 150s. It makes 36 per cent more power than our average 150 and weighs nearly 21 per cent less. Where the Pulsar 150, for instance, boasts 96 bhp/tonne, the CBR150R boasts 164 bhp/tonne, almost double. At first glance, the power does seem to stick close to the redline. But the first time you dip the clutch at low revs, the front wheel leaps up into the air, showing clearly that the CBR150R isn’t hanging about at low revs either.

Our ride that sunny day took us about 120 km in all. I was short of time and had a flight to catch, so Izzuddin picked out a brilliant route. We headed out of KL towards the famous Batu Caves and hit the superb road to Hula Yam Bharu. The road snakes into the mountains almost instantly and is about as straight as Elton John. The surface is almost perfect, sightlines are good and as Izzuddin kept pointing out, I could go as fast as I dared. The result was about 40 kilometers of riding with the engine hovering between 9 and 11,000 rpm. At these revs, there are some high-freq vibes in the grips, but you won’t notice them. What you will notice is the light, flickable feel of the incredibly slim motorcycle, the sticky tyres and the superb lean angles you can get to in total confidence. And because the traffic is so little and the road so perfect, you can lift your vision off the vanishing point now and then and have a look around.

Malaysia is gorgeous. The forests we are passing through are impossibly green, and not without a hint of menace. In many places, if it weren’t for the grey ribbon writhing through the scene, the trees look millions of years old and you imagine primordial creatures slipping through the dense underbrush, waiting to snap you up. A rider in full kit probably looks like a juicy morsel to the old, still-sharp eyes, stalking you effortlessly while you ride along in your high-speed cocoon.
Eventually, we come upon a spirited truck driver with a water tanker trailer who’s clipping apexes and spraying water on every curve. We decide to pull into the Malay equivalent of a dhaba for some tea and grub. The smoking hot tea feels good in the muggy weather and the paratha parallel is a plate of steamed rice with a stubby omelette and chilly sauce (like Momo sauce) for accompaniment. It tastes delicious and soon we’re back on the road. Izzuddin gestures to a board that says we’re taking a right turn to the famous Genting Highlands, KL’s next door playground, located on top of a mountain less than an hour from the city.

More to the point, we’re going from one hill to another one, set even higher. And the roads. Oh the roads. I could weep with pleasure. The reason why the pics with this story aren’t so great is because I simply could not stop. The next hour and a half went by ticking off apex after apex on this brilliant road. The CBR is a willing playing partner and will flick with consummate ease into any line you like. Every time I thought I’d be scraping stuff, I’d find more clearance. The brakes are superb and more than once, I felt the rear-end lift off, MotoGP style, while braking into a corner. If it weren’t for the utterly blemish-free tarmac and the total lack of traffic, I wouldn’t dare ride this hard on a public road. Now and then, a burbling roar would turn out to be an Evo X heading the other way, or the scrappy squeal of approaching tyres would take the shape of a WRX STi, but more or less, we were free to play. The straight stretches were wheelied away, and the last bit of the road, one-way uphill, was just incredible. I promised Honda India I wouldn’t do this to them, but this is exactly the sort of motorcycle we need!

A couple of photo stops later, Izzuddin leads the way back down to Kuala Lumpur. The road back is still twisty, but busier, and Izzuddin returns to his riding style. Once more, we’re slicing through traffic at incredible pace, heading downhill as usual, amplifying the acceleration of the motorcycle. We pass tourist buses, private cars and taxis with supreme ease and are cruising now at 100 kph. Yes, cruising. Soon, we hit the final 25-odd km of freeway and drone back into the city. I’m definitely feeling a bit tired, although neither the CBRs nor Izzuddin seem to show any sign of the hard ride we’ve just put down. What can I say, I was up late three nights in a row and, um, spent lots of energy in the preceding days as well.Having totally given up on bodily movements, I gently steer my way down from the mountains and into city traffic. Moments later, Izzuddin is back to swishing his knees on passing cabs, squeezing into impossible gaps and generally mucking about. I follow as best as I can. When we finally pull into the forecourt of Boon Siew Honda Malaysia, I find enough energy for three brilliant wheelies as a celebratory end to a super, super ride.   As you can tell, I was pretty chuffed with the motorcycle, the roads we were on and the fact that Izzuddin turned out to be a superb riding partner. But there’s another aspect to this that is causing me to break out in goose bumps. The CBR150R, in spec, is pretty dramatically close to the Yamaha YZF-R15 that’s coming in a month or two. The engine has fuel-injection but no double overhead cams. It will have good power, and as the Honda proves, 165 bhp/litre is not that hard to get, or impossible to imagine. Yamaha has not released detailed specs, but I can tell you this. A revvy, powerful 150cc motorcycle with great handling, 18-20 bhp of power and weight around the 120 kg mark will keep you smiling for years. The CBR150R handles brilliantly and it looks good from all angles but the front, where its slim look and the double headlamps make it look slightly awkward. It remains one of the most exciting 150s I’ve ridden, and I’m hoping that Yamaha’s comeback vehicle, the R15, will top the experience. Fingers crossed.

We roll the motorcycles into the service area and climb off. Soon, we’re seated in front of the genial Mr Yeap of Boon Siew Honda. He’s glad we enjoyed the motorcycle ride (and I’m sure the fact that both bikes are still in mint condition is helping the jovial mood) and is now enquiring into our motorcycle market. I tell him the Unicorn costs about one third the cost of the CBR150R and the laughing comes to a complete halt. And resumes again, when he establishes that our Unicorn is heavier, slower and therefore, obviously, cheaper. He’s stunned at the number of motorcycles we sell in India, obviously, but then he asks the question of the day to Izzuddin. ‘So, Izzuddin, CBR or NSR?’
Izzuddin smiles, ‘This is only the second time I’ve ridden the CBR, but I must say, two-strokes are better. NSR, any day.’ He turns to me, then, and says, ‘How about it? You come back, and I organise two Knars and we go for a ride...’ You’re on, mate!

A big thank you to Honda India and Honda Malaysia for helping organise the two Honda CBR150Rs for me. And a huge thank you also to Izzuddin for his patience and help during the ride.