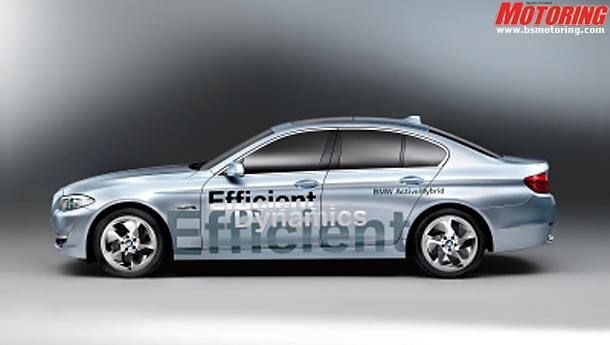 German carmaker BMW plans to take its 5 Series ActiveHybrid concept into full-scale production as early as next year and expects to introduce the dual-powertrain technology into its smaller 3 Series.

"As early as next year, the new BMW 5 Series will also be available as a full hybrid. And we are anticipating the hybridisation of further models series, such as the BMW 3 Series," Chief Executive Norbert Reithofer told shareholders at the carmaker's annual general meeting in Munich.

As emission standards become ever stricter, BMW needs to lower the carbon footprint of its fleet in coming years as Brussels targets an overall level of around 95 grams of carbon dioxide by 2020 for new cars sold in Europe.

"We want to reduce our global fleet's carbon emissions by at least another 25 percent between 2008 and 2020," Reithofer said.

At the end of last year, BMW's European fleet emissions equated to 150 grams of carbon dioxide per kilometre, down from 156g at the end of 2008.

First shown at the Geneva auto show in March, the 5 Series hybrid can be driven entirely in electric mode -- like the Toyota Prius -- after the saloon's brakes recuperate enough kinetic energy initially generated by its petrol engine.

This would be BMW's second full hybrid on offer after the BMW ActiveHybrid X6 launched at the end of last year.

By comparison, the larger BMW ActiveHybrid 7 luxury saloon that hit markets this spring is a mild hybrid, meaning it cannot run on zero-emission electric propulsion alone.

Reithofer pointed to government incentives for hybrids as a key driver of demand, particularly in Japan.

"Sales of hybrid vehicles (there) have skyrocketed. If you don't have a hybrid in your portfolio, soon you might not be selling any cars in Japan at all," he explained.

BMW plans to sell over 1.3 million vehicles this year, a fraction of the 6 million plus that Volkswagen will sell -- a key advantage for VW's luxury brand Audi versus its German rivals BMW and Mercedes-Benz.

BMW reaffirmed its targets for 2010 at the AGM.