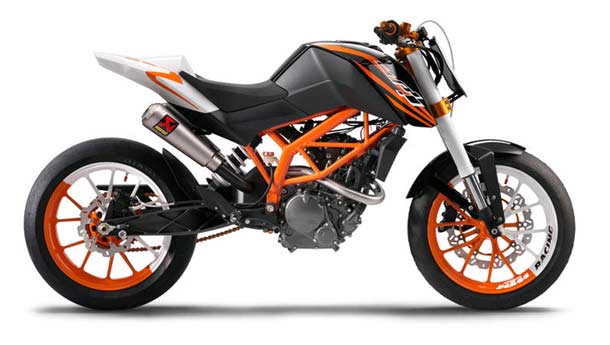 The high-performance range of street bikes to be launched from the Bajaj-KTM collaboration are expected to carry a price tag of more than Rs 1 lakh each.

Both companies have been involved in the development of a variety of motorcycles over the past 24 months, starting from 125cc. The first of these bikes would be launched in the European market by the end of this year, followed by the India launch during the first half of next year.

Rajiv Bajaj, managing director, Bajaj Auto, said, “Whatever product will be out in the market will be at a very significant premium as against brands like the Pulsar. Else, what is the use of bringing such a product?”

Bajaj Auto is lending its Chakan manufacturing plant for the project. It is co-developing the product with KTM, which is doing much of the designing and development aspect of the bikes. KTM, the Austria-based manufacturer, is Europe’s largest manufacturer of performance bikes.

The costliest Pulsar (Bajaj’s performance brand) currently sold is priced at around Rs 70,000 (ex-showroom) and has an engine size of 220cc. This is also the most powerful model within the Bajaj line.

The most expensive production bike made in the country is the Royal Enfield Classic 500, at Rs 1.47 lakh in Mumbai, followed by the Classic 350 and Yamaha R15.

Global grasp for youth market
The venture is aimed at leveraging Bajaj’s expertise in low-cost manufacturing with the technological prowess of KTM. The joint venture is aimed at tapping emerging as well as developed two-wheeler markets across the globe, with small and high-capacity bikes.

Although most 125cc motorcycles currently on sale in India are focused on delivering better mileage with decent power, the Bajaj-KTM bikes are positioned as sporty bikes for better performance than the current best sellers, including Honda’s Shine and Hero Honda’s Glamour.

These bikes will also have radically different styling and are designed to appeal more to the youth class of buyers. The price of these bikes could be in the range of Rs 2.3-2.4 lakh in the European market, a substantial premium when compared to the Indian versions.

Bajaj Auto also sells the Kawasaki Ninja 250R in the domestic market, priced at close to Rs 2.7 lakh. This bike, however, is brought to India in a kit format, later assembled at the Chakan facility. The KTM-developed bikes will be manufactured in India.

Bajaj and KTM are also working on an even higher engine range of around 250cc. These could be launched after three years. Bajaj hopes to sell 1,00,000-2,00,000 units of the smaller engine bikes in India and other parts of Asia. The Pune-based company has taken distribution charge in Asia.

Bajaj holds 35.67 per cent in KTM Power Sports AG through the Netherlands subsidiary, Bajaj Auto International Holding BV. Both companies also have plans to launch the imported range of bikes from the KTM stable in the coming period.