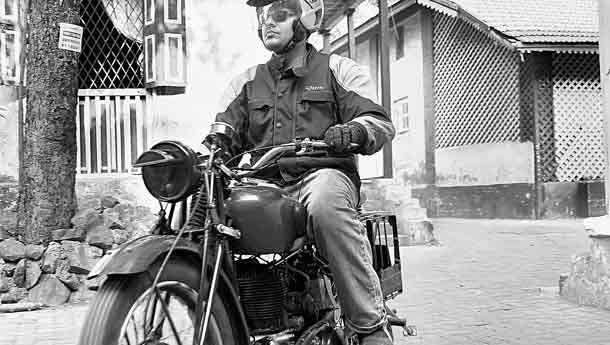 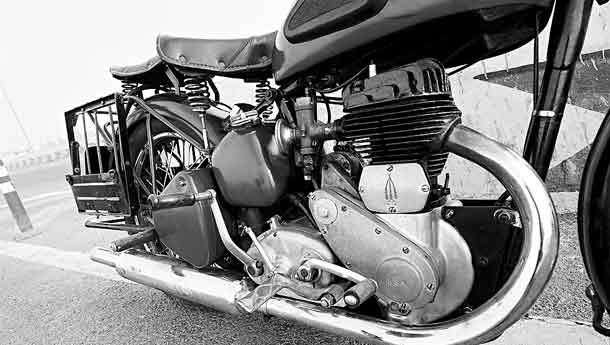 Close your eyes for a few seconds. Think about what a tug-boat used to tow the USS Nimitz would be like if it were on two wheels and you could swing your legs over it. Now picture it with a girder fork up front, springs beneath your butt and no suspension at the rear. The mental image you have pictured is most probably the erstwhile M21 – 600cc of raw pulling power.

Yep, I rode this machine and I revelled in every moment on the saddle. It’s not fast, it’s not manic and it definitely isn’t suave. It’s big and it’s fat (it doesn’t seem so in the photos because I’m ‘healthier’) and it’s unassuming. It has the typical graceful period lines but sure, there are better looking motorcycles of its vintage. But not many can do what it does. The M21 is the mechanical equivalent of a mule – unglamorous, but the only thing that will carry you, your family, your neighbours and everything including your kitchen sink, without the slightest hint of protest, and waddle off into the sunset.The BSA (Birmingham Small Arms – they made guns and hence the ‘piled rifles’ logo) M21 grew in girth from the already bulky M20 (BSM, Nov. 2000) – a machine which was used extensively in WWII for dispatch riding and other such wartime duties. The M20 was essentially a slightly modified civilian machine designed to ferry sober Brit men to work and for the occasional jaunt. It displaced 500cc and was good for about 95 kph, with around 12 horses lugging the rider around and had a stroke length of 109 mm.

The M21 bloated into a 600cc-engined motorcycle with a 112 mm stroke, and about 15 horses providing the propulsion, but it shared its cylinder barrel and connecting rod with the M20, and both had flat crowned pistons too. Production of the M21 ran from 1937 right upto 1963. Upgrades, like with all British motorcycle marques, came slowly, with the rear-rigid and front-girder forks setup staying right upto 1948, when the front girder fork was finally replaced with telescopic forks. However, the rear had no suspension upto 1951, when ‘plunger springing’ was introduced, and stayed till the M21’s demise in 1963. M21s were especially suited as sidecar luggers and the British Automobile Association had them attached to yellow sidecars that used to patrol the roads in search of stranded motorists that needed help.   Starting the bike is a cinch and all you need is a 30 kilo foot. A bloke used to kicking Jap 100cc’s would really think starting this bike is a gargantuan task after a go at the kick lever, but one does get used to it after a bit. The starting ritual is the same lavish affair commonplace with most classic Brit bikes and as usual, is just short of rolling a red carpet with trumpeters tooting in the background. Decompress – half kick – retard timing – kick like your life depended on it. But the good news is that the M21 is very easy to start and legend has it that these side valvers have gurgled to life within two kicks even after being disused for years – talk about reliability.

Hearing the bike makes you realise that you could probably run to Middle Earth, mediate an end to the Indo-Pak friction and come back just in time to hear the next stroke of the engine. Okay, maybe the ‘end to the Indo-Pak friction’ bit is a little too far-fetched but the fact is that the engine has an extremely slow idle. It has that particular ‘ka-choof ka-choof’ sound that is very typical to side-valve engines and immediately invokes flashes of a steam locomotive in your head.

The M21 is strictly utilitarian, with an ammeter letting you know about the state of charge of the battery and a chronometric Smiths speedometer reads the speed in miles per hour. The Smiths has a very quaint movement of its needle, which resembles the staggered moving of the second hand on a clock.  The M21 I rode had a ‘black out’ headlight up front and a tail light at the rear that would give a glow worm a superiority complex. The black-out headlight was fitted onto military vehicles and was designed to focus a very limited beam of light onto the road just in front of the front wheel, such that the light couldn’t be seen from high above or from a distance, but was sufficient for the rider to see the road ahead. This was very important, as no sane rider really wanted a Me-109 training its crosshairs on him from up above as he plodded down the road.

Riding the M21 is a piece of cake in a non-conventional way. It moves and behaves like most British girder-rigid setup bikes, but you nearly slip into a coma when it just rumbles on in top gear at ridiculously low speeds. You see, Sajid and I are both a tad heavier (by about 20 kilos each) than the average bloke and with both of us on the bike, it just pulled along at about 25 kph in top (4th) gear – all thanks to the long stroke engine.All that grunt is transmitted through a four speed gearbox with a first-up and all-down shift pattern. Gear changing isn’t a sophisticated matter and brute force is recommended. The M21 has a six-spring clutch to handle all that torque but the clutch lever is very light to pull in.The ride quality isn’t really plush, but that is to be expected from a bike with no suspension save a few springs thrown in between you and the road. The girder fork surprisingly does a decent job of soaking up the imperfections on the road and the springs on the seat keep my butt in a constant state of vertical oscillating motion. The drum brakes manage to slow the bike down, but I really had to keep gauging my braking distances carefully. But then again, you can’t really think of stopping a charging rogue elephant dead in its tracks, now can you?   When the M21 does stop, there’s a side stand that resembles a ski pole and is a good 2 feet long. You remove it from its clip, swivel it till it locks into place and then you slowly rest it onto the ground by tilting the bike. The end of the side stand has a spike designed for it to dig into the ground till the bike is stabilised. The main stand is of the bicycle type and I now know why them Brits are built so big – takes almost all my breakfast and last night’s dinner to simply put the bike on stand and as if to add insult to injury, Aman casually asks me if the bike is heavy. Yes Aman, its heavy. Very bloody heavy. Hats off to this machine. It did what it was told and did it exceedingly well.

The M21 is one of those machines that neither got the glamour nor the hype, but didn’t quite bother because it was busy toiling hard in the shadows. Thank you Sajid for allowing us to ride this fantastic slogger.